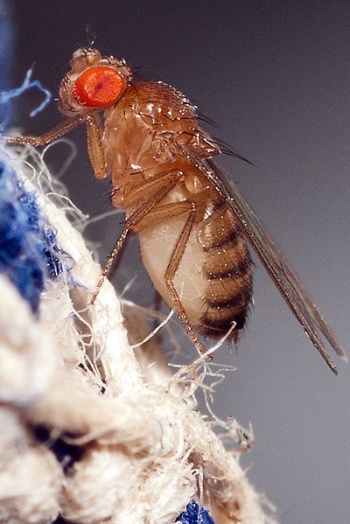 No, it’s not some bizarre insect-themed rally slogan, but a new way to stop bugs from breeding.

Scientists at Kansas State University have identified a neuropeptide, natalisin, that controls insects ability to mate. It’s found in arthropods and insects and is used to chemically relay messages throughout the body. “Natalisin is unique to insects and arthropods and has evolved with them,” said Yoonseong Park, one of the researchers in the study. “It appears to be related to a neuropeptide called tachykinin that is in mammals and invertebrates. While tachykinin is involved with various biological processes, including the control of blood flow in mammals, natalisin is linked to reproductive function and mating behavior in insects and arthropods.”

The study consisted of scientists from the Institute of Science and Technology in South Korea; the Slovak Academy of Sciences in Slovakia; Korea University in South Korea; and Kansas State University. The international team studied fruit flies, red flour beetles and silk moths in all four stages of their life development to see what natalisin controlled. Using a process called RNA interference, scientists blocked or silenced natalisin, which reduced the insects’ interest in mating and interfered with their ability to physically reproduce.

“For example, we saw that knocking out the natalisin in the fruit fly makes them unable to mate,” said Park. “The female is too busy grooming her body for the male to approach her. The male doesn’t send a strong enough signal to the female to get her attention. We’re not sure if that’s because the male can’t really smell her or because he is not developed enough to signal her.”

Identification of the neuropeptide will hopefully lead to new sources of pest control that are environmentally-safe. Since natalisin is only found insects, it wouldn’t be harmful to humans or other animals. Hm, I wonder what bees would have to say about that.