This article contains some spoilers for Stray in its discussion of body horror and the Zurks.

While Stray is very much an old-school video game adventure, its aesthetic trappings defy easy categorization. Post-humanism, post-apocalyptica, dystopia, cyberpunk: Stray mostly fits within a pretty tight spectrum of pessimistic futurism — other than its short, sharp detour into body horror. This deviation is as unexpected as it is unsettling, and that serves to make it one of the game’s most impactful segments.

Body horror revels in transgression. It’s a subgenre about the twisting and deformation of the physical, the pushing of boundaries of what it means to be human. In that respect, it’s not all that different from the transhuman tendency often found within cyberpunk. Where it does differ is in the outcome of monstrousness rather than cyborganism. Films like The Fly, Akira, and the recent Crimes of the Future are widely considered exemplars of the genre, but its origins stretch back to Mary Shelley’s Frankenstein.

In video games, body horror is perhaps best exemplified by the likes of Dead Space, BioShock, and Death Trash, with their focus on the abjection of bodies, of humanity made monstrous. Stray’s dalliance with horror isn’t as intense or as prolonged as in those games.

In fact, even though the game builds up to its gross display, it still feels a little random. It begins with the Zurks. These ravenous bugs resemble nothing so much as fleshy pustules. They’re like giant ticks, consuming everything in their path, and their hunger has the robotic Companions trapped within Dead City. That’s the first layer. Zombie-esque, the Zurks exist as a looming menace outside, trapping the population in desperation and despair. 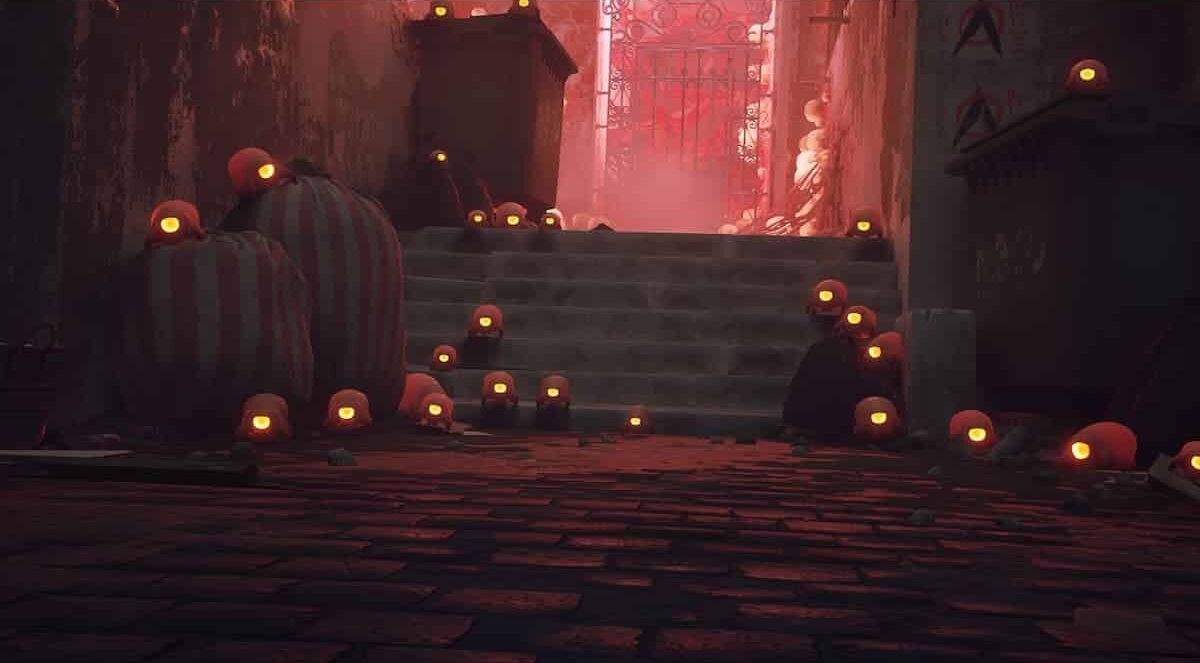 The second layer hits when you enter their space. The Companions are large and slow; they can’t outrun or out-climb the Zurks in the same way a cat can, with its inimitable grace. So, you leave the safety of Dead City on an errand. Out there, the Zurks have infected and infested the world. Their nests take the form of great webs of pink goop that hang between buildings and block off alleyways, pimple-like extrusions acting as egg sacs from which they’ll pour if you edge too close. It’s a technique borrowed straight from Alien, but it’s no less effective in Stray. It’s the organic made strange and threatening.

Where Stray tips into body horror is when you descend into The Sewers. Darkness, filth, machinery working in unknowable ways — there’s something about sewers that are perfect for horror. Stray uses them to their fullest, abjectest extent. Down there, the nests have taken over huge swathes of space, metal given way to vast, pulsing mats, curtains, and uvulae of flesh. Caught amongst it are robot bodies, chairs, bicycles, the detritus of human and post-human existence.

And then you turn a corner. Suddenly, enormous human eyes gleam from amidst the flesh, dark irises peeking out from blood-red sclera. They watch the rooms, quiet sentinels over the nests. They meld the familiar and the alien in the way body horror so often does. They transgress the boundaries of what is acceptable. They challenge normal. Even for a cat, there’s no escaping their gaze. There’s a near sub-aural hum. The irises narrow to pinpoints, glaring forward. Zurks pour from the roof.

You’re not Isaac Clarke or Jack Ryan. You’re a cat. The tools at your disposal are not enough to deal with the threat. That sense of helplessness reinforces the horror. So, you deal with the enormity of the strangeness in the only way you can: you run.

From there, the tension builds, resulting in one of the most compelling sequences of the entire game. It’s old-school adventuring in the purest sense of the term, a breakneck journey to escape from the sewers and the cascading rivers of Zurks that follow you. It’s very video-gamey and utterly engrossing.

And then it ends. You never really see the Zurks or anything to do with them again. There’s no attempt to explain what you’ve just been through. The Zurks and their strange guardians simply are, and they will continue to infest their dark, dank realms for as long as they can. It’s a weird statement piece.

The longer you play Stray, the clearer it becomes that the body horror isn’t some absurd aesthetic deviation to spice things up. It’s not random at all. It’s much more meaningful than that.

Stray is obsessed with boundaries. The cat’s entire quest is to make it to The Outside. Except the city is sealed, as are the layers between. From Dead City to The Sewers to Antvillage and beyond, each new place must be broken into before it can be broken out of. As such, you transgress boundaries, and you go where you shouldn’t: an organic horror in an inorganic world. The body horror of The Sewers is an external manifestation of your very presence in this place.

But it’s more textual even than that. The Zurks and the eyes contrast against the Companions: The monstrous flesh contrasts against the gentle inorganic. Parasites against beings that seek to nurture. The Zurks, made of flesh, appear natural, though their hunger would see them devour the world. The Companions, made of metal, appear unnatural, though they have all the human longings and impulses that see them caring for what remains of the environment around them. Those broader contrasts are an extension of the metaphor raised through the body horror.

Ultimately, Stray poses the question of how to exist in the world, and that’s expressed through the city, through the Companions, through the Zurks, and, yes, through the infectious, rhizomatic flesh that infests The Sewers. That undercity zone may be the most distinctive and apparently independent part of Stray’s world and story, but it’s also the fulcrum on which everything else turns.