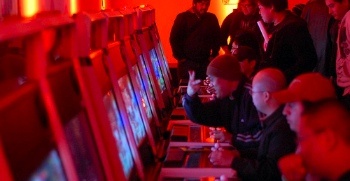 Last night’s Little Tokyo bash was one of the biggest videogame software launches ever witnessed and everyone walked away with a story to tell.

“Excuse me, we’re cutting in line now. Thanks.”

Originally, the Street Fighter IV launch party, located at the MOCA in Los Angeles, was to be an invite-only event, RSVP required. Over at the central hub for fighting game enthusiasts, Shoryuken.com, 500 of these golden tickets were being handed out on a first-come-first-serve basis. Whether Capcom was feeling generous or it just wanted to create the world’s largest Street Fighter flash mob, these were tossed out one day prior to the event as the doors were then opened to the public.

A line nearly 4,000 long wound its way incoherently around the venue like a theme park visit from your worst nightmare, all for a chance to be part of the largest fighting game launch of all time. This brought out the best in some hopeful players, as kids decked out in Street Fighter costumes met with fellow fans from various communities and kept one another company. It also brought out the worst, as the chaotic scene had attracted the club rats of Los Angeles — an attention seeking lot conjured by the presence of bright lights, loud music and long lines with little to no access. A fire Marshall had been beckoned to contain the event, but that wouldn’t stop them.

“Do you even know what this is,” asks a good friend of mine to a woefully under dressed lass. Her make-up is plastered on three times over with lip gloss for days. She is a living, breathing Bratz doll.

On the main stage, hip-hop artist Taboo along with the cast of Street Fighter: The Legend of Chun-Li (minus Kristen Kreuk who was in Japan promoting) is getting the crowd hyped up.

The red carpet outside saw quite a number of celebrities such as Steven Spielberg, Michael Clarke Duncan, and DJ Qbert who performed. Celebrities and videogames are often a polarizing mix, as gamers tend to recoil at the idea of pop culture invading their space, but it’s not as if this is exactly hurting the appeal of the game.

In the VIP lounge I ran into LeVar Burton of Star Trek and Reading Rainbow fame. Introducing myself as a friend from Twitter, we had a fascinating discussion about the merits of social networking (“It’s not ‘what has Twitter done for my status,’ but what has my status done for Twitter?”) and the finer points of how to play Balrog, or “Boxer” as I informed him, being a liaison for hardcore fighting fans. Back on the stage-

“So what do you think?” shouts Ono happily. He’d been running around like a kid in a candy store, snapping pics of the event and meeting with as many fans as possible. Ono and I have a brief history, going back to Game Developers Conference 2008 when the press got its first hands-on time with the arcade version of Street Fighter IV. Throughout the week, I interviewed him multiple times, gave him my feedback and essentially asked the toughest questions I could come up with. Street Fighter, as you can imagine, is serious business.

After a short flurry of Japanese, Crislip fills in the blanks.

“Ono says that he really took to heart your discussions and criticisms regarding Street Fighter IV and when he went back to Japan, he cried tears.”

Stunned, I look to Ono who is laughing hysterically. I wonder for a moment if he’s just being silly and overly dramatic, or whether he laughs because not only is his story true, but it doesn’t matter, knowing that in the end, he won. I place my hand on his shoulder in a gesture of great respect.

“It’s brilliant,” I tell him. “Everything turned out brilliant.”