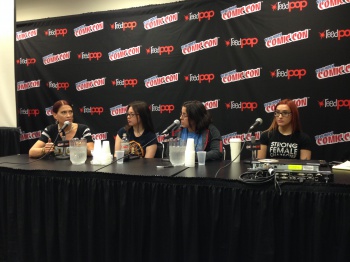 Sam Maggs, Associate Editor at The Mary Sue and author of The Fangirl’s Guide to the Galaxy, said that her first fandom was Sam Carter on Stargate SG-1–but she notes that some of Carter’s lines are now pretty cringe-worthy. “Wow, 90s feminism,” she joked. Maggs also cited the Song of the Lioness series of young adult novels as a source of stronge female characters.

Mairghread Scott, an animation and comic writer, loved the “pro-science” Captain Janeway on Star Trek, as well as Batman: The Animated Series‘ Catwoman: “She did not take any crap from him!” Jean Grey was also on her list. On the other hand, Nostalgia Chick Lindsay Ellis stated, “We need to recognize the internalized misoygyny that some of us grew up with” before giving Eponine from Les Miserables a shout-out; Ellis also admired X-Men‘s Mystique.

In addition to Linda Carter’s Wonder Woman, Vanessa Marshall, a voice actress on Star Wars Rebels, felt that Princess Leia embodied the idea of the strong female character: “She was so baller with that hair.” Pantozzi agreed, stating that Leia was “so different from what we’d seen for a princess”; she was really part of the action.

Of course, “strong female characters” doesn’t only refer to characters who are physically strong. Women in media should be strongly written and well-rounded; basically, they should be “written as people.” Greg Rucka and Neil Gaiman are two writers creating strong female characters, according to Pantozzi, but if you asked them, they’d respond “I just write good people.” With stories like Frozen and Maleficent “turning fairy tales on their heads,” audiences are becoming more familiar with the idea that “sometimes the princess can save herself… sometimes another woman can save the princess.” 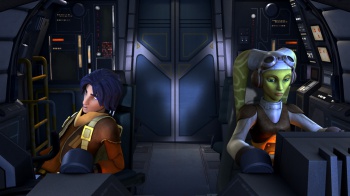 Discussing recent examples, Ellis said there’s been a lot of interesting discussion around Game of Thrones‘ Sansa Stark. Sansa gets a “visceral” reaction because when her story begins, she’s “the embodiment of everything people hate about teenage girls.” Over five books (and four seasons of the HBO series), however, Sansa’s character has grown and evolved. “Maybe there’s a lot of sexism going on in the way people respond to Sansa,” Ellis suggested.

Maggs cited another example of a negative reaction to a female character: the recent Batgirl relaunch. Because Batgirl is taking a selfie on the cover of the first issue and kisses a boy in the story, Maggs said, people were very critical of the character. “You have to look at what you’re criticizing,” she added, and think about why it’s a problem that women think they’re pretty and want to take pictures of themselves.

“And it was part of Selfie Month, where every cover had a selfie!” Scott pointed out. “Fake geek guys, man.” Scott then discussed Neko, a fourteen-year-old girl on the Transformers animated series. Because she often fails to get into the action, “it drives fans crazy,” but as Scott says, “She’s a 14-year-old girl in the giant robot war. She’s not really knocking it out of the park.” One element of female characters that’s seen too often is the inability to fail: “Women can’t fail. They’re not allowed to fail. Also you have to be completely selfless.” That’s just not realistic, and the panel revisited Sarah Connor, who “sucked” in the first Terminator movie because “if a killer robot came after us right now, none of us are ready for that.”

Marshall brought up Orphan Black and Orange is the New Black as shows with strong but flawed female characters; some are physically strong, some are intellectually strong, but “their humanity is right at the forefront.” Pantozzi added about Orphan Black, “They’re clones, so you think they’re the same person, but they’ve all been brought up differently.” One of the clones is even a mother, which raises the question of whether audiences equate motherhood with strength. In Ripley’s Aliens storyline, there’s a strong theme of motherhood, and “it’s such a strange thing that a lot of people don’t equate motherhood with being strong.” Maggs added that both of those shows also had great transgender representation, which is still a rarity in mainstream media.

The panelists moved on to questions from the audience. Are they worried about Princess Leia becoming a stereotypical Disney Princess now that Disney owns Star Wars? The bigger concern is Leia being eliminated from the marketing entirely because the genre is literally called “boys’ action.” Marshall added that Disney would have to do some “serious trigonometry” to mess up a character as iconic as Leia, and says that she aspires to be more like Star Wars Rebels‘ Hera. Ellis said that like any company, Disney will make the decisions that are best for the business, but “they remember that the female demographic exists… I was more worried about J.J. Abrams.” 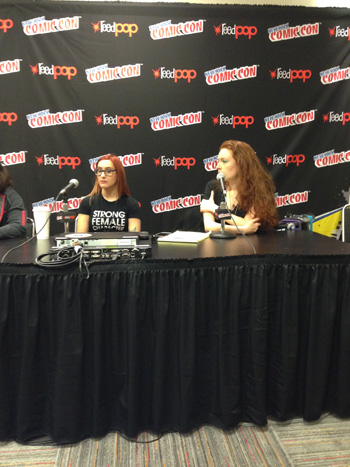 Marshall then shared a story of how she auditioned for the character of an African-American boy on The Grim Adventures of Billy & Mandy, a role she won because she was the only one who didn’t read the lines as “urban.” She said she now passes on a lot of voice work for diverse characters, because she wants those shows to use diverse casts. Pantozzi added, “If you have a writer’s room that’s all white men, that’s what you’re going to get,” mentioning the recent controversy of Gotham planning to use a white stuntwoman in blackface.

“Creators want to know how to create these characters when they’re of a different perspective. They feel like they can’t do that because they’re not women,” Pantozzi told me. “We felt it was good to shine a positive light on the ones that are already out there, and show what aspects of these characters are really the kinds of things that not just women, but all people are looking for.”

“People are trying,” Scott told the audience. Part of the problem is that the television industry moves so rapidly, so people with experience get hired, making it tough for more diverse talent to break in. It’s important to keep speaking up, though. “It’s getting to the point where story editors aren’t looking for a token, they want true diversity… but they don’t know diverse writers.”

“If you do find yourself being a white dude, it’s important to use your privilege!” Maggs chimed in, which means reach out to women and marginalized people and give them a voice. Scott addressed an oft-lobbed response to criticism: if you don’t like it, make your own. “That’s ridiculous,” Scott said. “They are asking you to spend money, and you have every right to tell them what you do and do not want to spend money on. As fans… you actually have a tremendous amount of power.”

The next audience question wondered how to bring more of these interesting female characters into various forms of media. Though nontraditional outlets like Netflix have given creators more ways to take risks, “we’re not seeing that with genre shows as much because of the conventional wisdom that it’s a boy thing.” Maggs adds that strong female characters in genre fiction are often relegated to the role of sidekick, but DC is making a Supergirl show because of the fans: “Continue to make a big deal out of the things you think are important.” 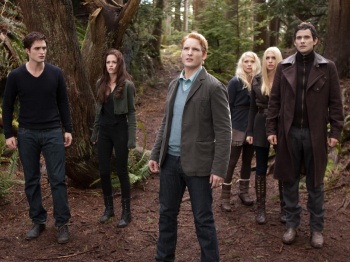 Another attendee pointed out that sometimes the response to objecting to women as secondary characters was “We gave you a female on TV, accept it.” “How do we say ‘this is a step, what’s the next step'” so we don’t only see strong female sidekicks? “Why isn’t there a female Arrow or Scandal with aliens?” Ellis asked, pitching possibly the greatest TV show idea ever. Scott added, “There is the idea that men and women won’t accept characters” of a different gender, “but corporations will always accept money.” So as a consumer of media, spend your time and money on the properties that are delivering the kind of women you want to see. Pantozzi cited the rise of “female-drive genre merchandise” sites like Her Universe, We Love Fine, and Black Milk as meeting consumer demand; when toy and clothing stores didn’t stock what women wanted, they looked elsewhere.

When asked how they feel about anti-feminist female characters like Twilight‘s Bella, they responded, “Like whatever you want to like and it’s totally fine… as long as you have a certain element of critical distance.” It’s possible to enjoy Twilight while recognizing that Bella is a problematic character, in other words. “Not a lot of people critique Sparkly Edward,” Scott added. “He’s abusive, he says ‘I’ve been watching you all night.'” Maggs adds that “a lot of shows glorify abusive relationships” and you have to point out, especially to younger girls, “that is scary.” According to Ellis, Twilight author Stephanie Meyer identifies as a feminist, and considers Bella’s evolution to be “her version of feminism.” “It’s not a black and white issue… We wouldn’t have The Hunger Games without Twilight.”

One of the defining ideas of the Strong Female Characters panel is that as a fan, it’s okay to want more from your fictional females, which Pantozzi reiterated later. “Look for these things, ask for better, because you’re the one buying, so ask for what you want.” She added, “I think that the fact that we’re getting more of those [strong female characters] is just going to make things better… The more we see, the more we’re gonna get, and the happier everyone will be.”