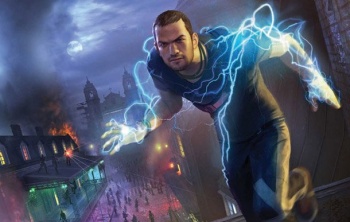 If you thought inFamous was good, Sucker Punch thinks you’ll die after playing the sequel.

inFamous 2 was recently revealed as the cover story in the latest Game Informer magazine. Details on the title have gushed out from the issue’s insides, including how the sequel will progress the series’ morality system and why all the ladies will swoon over the new Cole.

PSInformer describes the entire feature, and transcribed a few quotes from developer Sucker Punch. inFamous 2 will reportedly have bigger bosses (which weren’t too small in the first game) and could include new online features. Cole has a new sexy look for the fall season too, but the big change seems to be in the game’s evolved morality system.

PlayStation 3 exclusive inFamous allowed players to make either good or evil choices. Healing pedestrians and completing good missions unlocked unique good powers and gave protagonist Cole a friendly look. The opposite unlocked evil powers and made Cole look quite nasty. Aside from a major choice or two, the division between good and evil was quite obvious.

inFamous 2 won’t be so cut-and-dry. “There are bigger consequences to your choices, and it’s not really obvious what’s good and bad,” Sucker Punch says. “Morality is certainly a big part of the product. And we are committed to making it impactful and meaningful, and have it be something you feel is responsive to how you’re playing the game.” This sounds similar to what BioWare did with Dragon Age.

Sucker Punch also says that it hopes to give everyone that enjoyed the first game a “heart attack” with the sequel’s improvements. inFamous was quite good, so a heart attack-level second game would be very welcome.