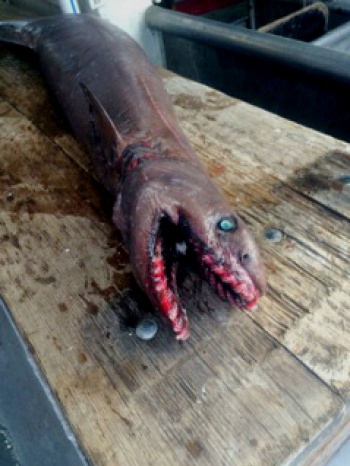 Why is this super creepy shark important to science? Because its ancestry dates back 80 million years.

If you’re a fisherman, it’s presumably very easy to stumble across strange, bizarre, and exiting objects. But I suspect even this creature caught in Victorian waters off the Australian coast would give the most experienced fisherman pause. While it may look like an eel, this is actually a two-meter long frilled shark that’s rarely seen in Australia. It’s also fairly significant to the scientific community, thanks to an ancestry that can be traced back almost 80 million years.

“We couldn’t find a fisherman who had ever seen one before,” Simon Boag of the South East Trawl Fishing Association explained, when asked about the find. “It does look 80 million years old. It looks prehistoric, it looks like it’s from another time!”

The frilled shark was caught in a fishing trawler near Lakes Entrance, located in Victoria’s Gippsland region. While it’s the first time seen in living memory among fisherman, scientists are familiar with it as one of two remaining descendants of an ancient aquatic family. But even as an intriguing “living fossil” it’s hard not to feel a little horrified while studying it – a peek into its mouth reveals 300 teeth spaced across 26 distinct rows.

“Once you’re in that mouth, you’re not coming out,” Boag continued. “Good for dentists, but it is a freaky thing. I don’t think you would want to show it to little children before they went to bed.”

Anyone else fishing in Australia probably doesn’t need to worry about encountering a frilled shark themselves. All waters deeper than 700 meters are closed to trawling, while the sharks keep to waters 1500-1200 meters deep. This particular shark has been purchased by Griffith’s Sea Shell Museum and will be put on display in two to three weeks.