You’d think that superheros and videogames would be a natural fit. Both are good at portraying the classic empowerment fantasy, and the audiences have plenty of overlap. But for some reason the genre is a graveyard of failures and missed opportunities. Yes, the Batman Arkham games are a runaway success, and Spider-Man 2 is considered a classic. But the list of failed Batman games is much longer than the list of successful ones. (And a lot of the really horrible offerings have been largely lost to time.) It’s been fifteen years since Superman 64, and that game is still considered to be one of the worst ever made. Not worst superhero game, just worst game, period. Spider-Man 2 was good, but the other two games in the trilogy were a mess. Not only do the bad superhero games greatly outnumber the good ones, but they tend to be really, REALLY bad.

Obviously part of the problem is that too many superhero games were cash-grab movie tie-ins that made no attempt at quality. But the deeper problem is that it’s taken developers a long time to work out mechanics that felt right, and it took us a while to get the technology we needed to portray open-world spaces that superhero stories demand. I don’t care how good you are at making side-scrolling platforming beat-em-ups, the player is never going to feel like Superman or the Silver Surfer in one of those. We need big 3D worlds to make this work, because freedom is part of the empowerment fantasy and it’s tough to feel free when you’re trapped in an endless procession of corridors.

But now we’ve got the technology to depict large spaces and we’ve got established mechanics that are fun and intuitive. The runaway success of the Arkham games has shown that the public is hungry for this sort of thing and superheroes haven’t been this popular in decades. Now we just need to figure out what superheroes are a good fit for videogames.

Superman is right out. Not to knock on Supes, but he’s too powerful to work in a conventional game. In most action games a vast majority of our gameplay hours are spent defeating identical mooks, and Superman is too strong for mooks. Who can pose a credible threat to him? Who can keep him from just flying away (through walls, if he needs to) if a fight goes against him? Who can endure more than one punch from him? What could the game designer possibly do to keep Superman contained in the gameplay area and prevent the player from just flying over or through all the obstacles? And even if we do contrive some mooks for him to fight (say, space aliens) are they going to be interesting and varied enough to support a whole game? And can we count on them for sequels?

Superman fights space demons and gods and natural disasters. Either you’d need to dial his power level way down (at which point you’re no longer making a Superman game) or you’d need to make every challenge in the game into an epic boss fight or set-piece catastrophe. Not only would you need to invent entirely new gameplay for that sort of thing, but it would cost a fortune to produce. I’m not saying a proper Superman game is impossible, but I am saying that in today’s climate it would be impossible to get AAA funding for a game that’s risky, experimental, and even more expensive than usual. Forget it.

Guys like Green Lantern and Dr. Strange are probably a difficult fit for games as well. Dr. Strange has all sorts of crazy, reality-bending powers that work well in print but would translate poorly to “exploring and fighting mooks”. Same goes for Green Lantern and his ring of “make any green shape you can imagine”. Their powers work wonderfully in comic books where you have artists that are just looking for an excuse to draw something outlandish. In-game, those powers would translate to “magic missile” and “green fist” respectively. You could probably make a decent game out if it, but it would require taking away the wild, imaginative spark that makes them so interesting. 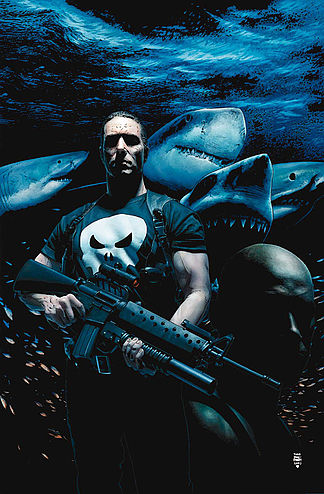 So who would be good? If the Marvel or DC people wanted to create another Arkham-type franchise, what existing characters would be useful? Who’s powerful enough to be fun but mortal enough that the player has challenges to overcome? Who’s famous enough to sell games but not yet overexposed? Here are my suggestions:

The Grand Theft Auto games have you playing as a lawless but still ambiguously “good” protagonist against endless waves of goons, gangsters, and thugs. The gameplay actually fits Frank Castle better than it fits guys Niko Bellic or Carl Johnson. He’s even got a sidekick of sorts, who would perfectly fill the “Oracle role” of the Arkham games by delivering exposition and tasks via cheap-to-produce audio messages.

This should have happened years ago. Probably the only reason it hasn’t is that GTA-style games are notoriously expensive to produce.

(All of this also applies to Judge Dredd. He’s ideally suited to sandbox city gameplay… assuming you’ve got the budget for that.)

She’s got the name recognition, and yet she’s not overexposed. In fact, the lady can’t seem to catch a break and hasn’t really gotten any meaningful screen time since the 70’s. Canon-wise, her power level is all over the place, from being “as strong as Superman” to being more in line with typical street-level superheroes. I think there’s enough wiggle room that you could put her up against mortals without offending the fans.

He’s strong but mortal, and his shield could make for some fun gimmicks. The only strike against Cap is that he doesn’t have a lot of mobility. He doesn’t swing, fly, or super-jump across cities. It would still be do-able, but the game would probably need to be scaled down to a single locale, as they did for Batman in Arkham Asylum. Maybe give him mobility via parkour platforming, giving us an Arkham / Prince of Persia mashup. That could be a lot of fun.

All of this applies the same to Wolverine as well: Good power set, but the lack of mobility would be a drag in a really big open world.

Playing Flash with his actual power set would be either trivially easy (because you’re always in bullet-time) or impossible (because the player doesn’t actually have superhuman reflexes required to be the Flash) so we’d need slow him down from “light speed” to “just really fast compared to everyone else”.

Are we ready for a game built around bullet-time? And are fans willing to see his power scaled down a bit? If so, then get this man a game.

He’s been in four blockbuster movies in five years, but nobody’s sick of the guy yet. Marvel should get this guy a proper game before that changes. He can fly around a city, and he’s got dozens of tech-based powers that could fit into some sort of unlockable upgrade path for the player. He’s usually depicted as being bulletproof, but I think players would be willing to accept firearms (but not fists) as a credible threat. He’s got Jarvis for exposition and his weapons-making company is perfect for attracting (or even creating) villains for him to fight.

The only downside is that whoever ends up voicing him is going to end up standing in the shadow of Robert Downey Jr., and that’s a long shadow. They could just just hire Downey, (assuming he’s interested) but then they’re going to run into the expectation that this is “Marvel Movie Universe” Iron Man, which brings a bunch of complicated baggage. Movie Iron Man is awesome because of his chemistry with his supporting characters, and that might not work so well in an action game.

His “mooks” would probably need to be robots or paramilitary guys in space marine armor, but those fit really well into the typical Iron Man story.

Like Moviebob said a year ago, Enough with the Batman Already. We’ve got tons of great superheroes out there. People don’t love the Arkham games because they have Batman in them. People loved Arkham because the combat was satisfying, the writing was solid, the gameplay was varied, and the visuals were gorgeous. Rather than flooding the market with more Batman, let’s get some of these other heroes out there and give them the same treatment.