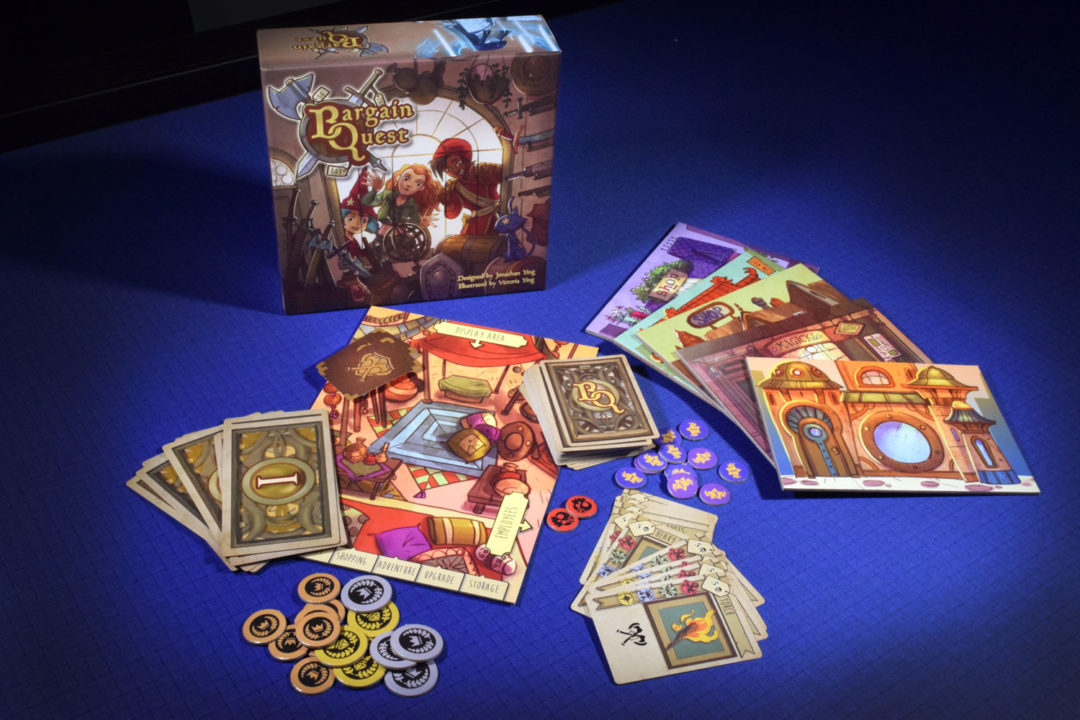 Shopping is a surprisingly important part of being a hero. Dungeons & Dragons, Pathfinder, and other role-playing games have complex rules for how much money characters get to buy weapons, armor, bedrolls, and other equipment needed to face a world of fantastic dangers. There are even more rules for how much money they’re likely to earn from killing monsters and selling their old equipment, as well as their likelihood of being able to buy the healing potions and magic backpacks that will make their future endeavors easier.

That complicated fantasy economy is the whole focus of Renegade Game Studios’ Bargain Quest, which quickly sold out at GenCon in August. Two-to-six players take on the role of shopkeepers looking to profit off adventurers by selling them equipment before they go off to fight a series of escalating threats like bandits or rampaging orcs. If they survive, they’ll come back flush with more cash to spend. If they don’t, there’s a whole deck of new adventurers ready to take their place.

Each round, players draft four cards representing different types of equipment. Each card has a price that adventurers will pay to acquire it, a star value representing how appealing it is to window shoppers trying to decide which store to visit, a value showing how much it will help the hero fight, and a restriction on what kind of hero can use it. Players then choose to put one card in the window that can’t actually be bought and the rest face down to represent their stock. 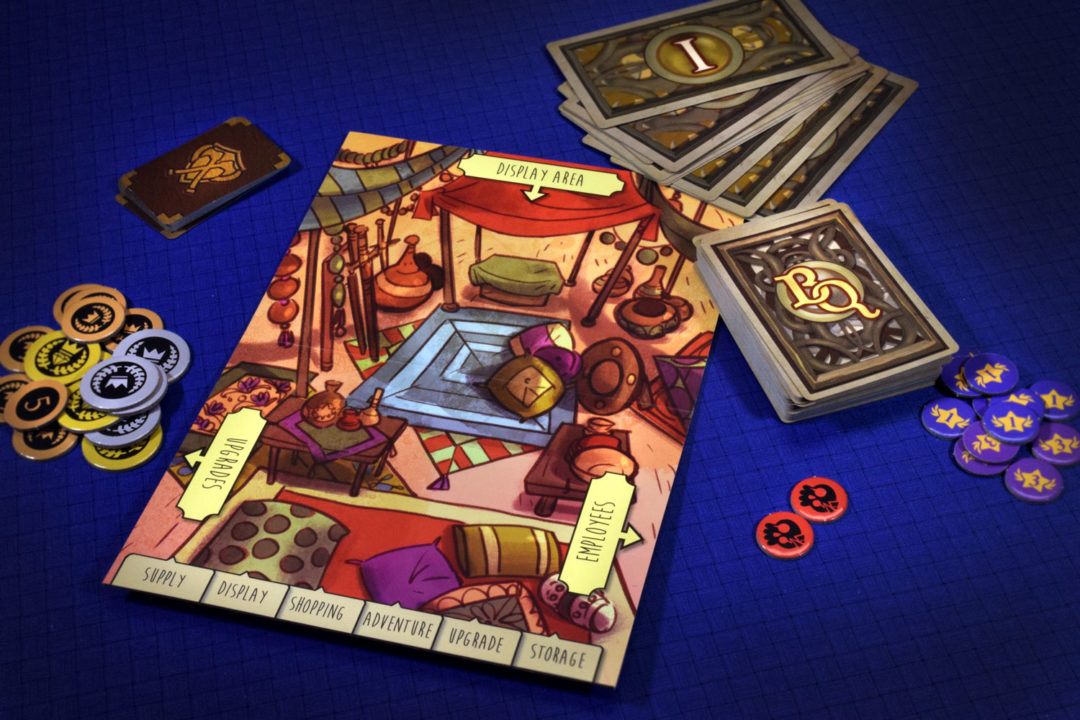 Window displays are all set up simultaneously, and your turn can be ruined if another player is pursuing the same strategy you are. There are an equal number of heroes and players, and the player with the most stars on display gets first pick so long as that player also has compatible goods. A wizard doesn’t want to visit a store showing off heavy weapons, no matter how nice they might be. If your display doesn’t match any of the available heroes, you wind up getting last pick. When a hero shows up, they won’t spend any money on gear they can’t use. That means if you didn’t get the character you were hoping for, you’re not going to make any money and they’re likely to wind up ill-equipped for their adventures and die without even damaging their foe.

While cards sold to adventurers are gone forever, the ones you display can be put in storage and brought back out the following turn. Players will often maintain a consistent strategy, building up a reserve of goods meant to appeal to a particular type of hero. You’ll want to be aware of what the other players are doing and what heroes are available to choose, whether to put something on display that’s impressive but has narrow appeal or something that is still going to draw in your second or third choice. Heroes also have special abilities that you need to take into account. For instance, clerics will accept charity, so you can sell them gear at a discount to reduce your gold but increase their effectiveness. Meanwhile, rogues will have extra gold to spend since they’ll steal some from your opponents.

Points are earned in Bargain Quest not just from making money but by gaining a good reputation by selling to successful heroes. You gain renown for having your customers damage the enemy and come home safely. If the enemy isn’t defeated at the end of the round, it will typically attack the player with the most renown, stealing goods or extorting them for cash. The mechanic is meant to ensure that players can come from behind, but it exacerbates the game’s collective action problem of preserving the number of heroes. 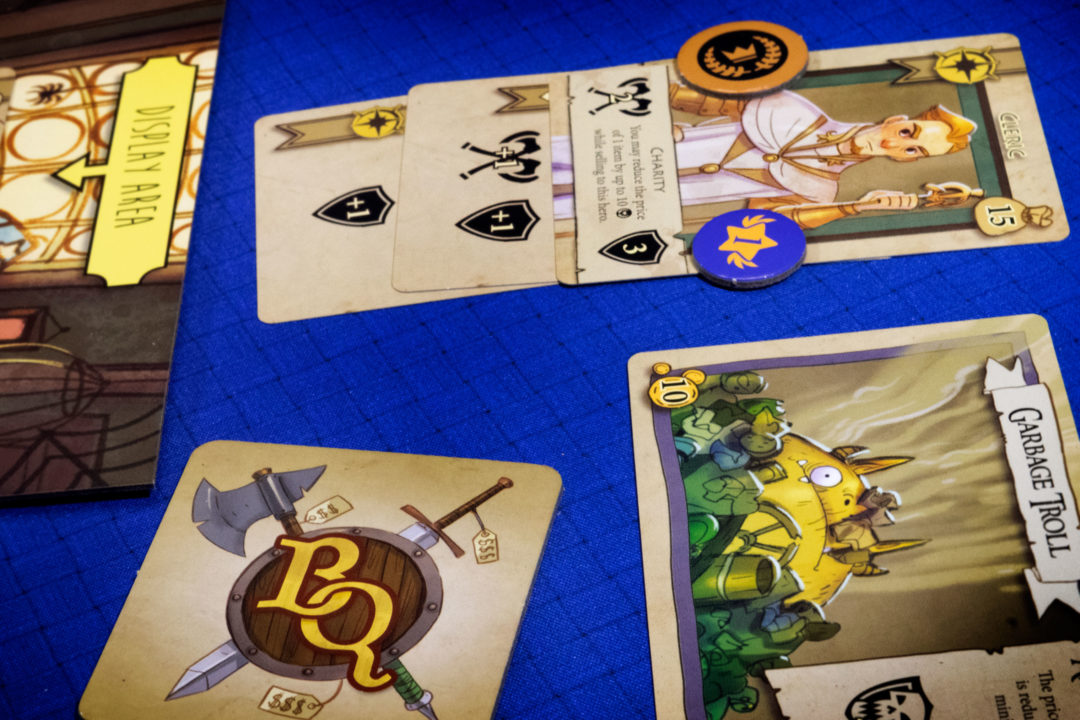 There are a limited number of possible adventurers, and if that deck runs out before three enemies are defeated, everyone loses. We came dangerously close to that outcome when I played since I was one of the only players that seemed to focus on protecting my adventurers rather than pure profits. Some players were all too eager to sell cursed or useless items rather than try to carefully dress their heroes for success. There’s a bit of luck that can intensify the issue, with each hero getting a random draw from an adventure deck that will either help or hurt their chances in combat. As reputation leader through most of the game, my shop was repeatedly attacked and I eventually lost to someone who had a terrible reputation and a fat stack of coins.

You can also spend money to upgrade your shop and increase the number of cards you can put in storage between rounds or the number of cards you can place in your display. You can even hire employees who will protect your shop from monsters or sell the items on display. While being the first person to get one of the upgrades provides a huge advantage, eventually everyone in our game had purchased everything and the upgrade phase became essentially irrelevant. A Black Market expansion is already available, though it’s also sold out, and I hope it adds more ways to keep this aspect of the game going or at least some other things to do with your money late in the game besides hoarding it.

Bargain Quest says it takes 45 minutes to play, but our game took twice that long. Part of that was probably because it was our first time playing and we had to learn the rules and read all the cards carefully, and part of it was because the focus on making money rather than adequately equipping heroes meant it took a long time for the enemies to die. Even so, the game was never boring thanks to the silly flavor and charming art. If you’re a fan of fantasy RPGs, Bargain Quest will give you a new way of thinking about your in-character shopping trips.