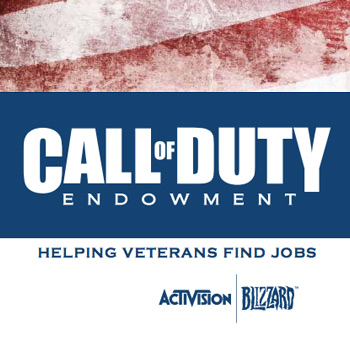 This week Activision, Treyarch and Microsoft will be donating the profits from selected Black Ops 2 DLC packs to the Call of Duty Endowment.

The folks at Activision have always had a soft spot for veterans. In 2009 they launched the Call of Duty Endowment, a non-profit organization that assists veterans with job placement, training and educational services. And this week, Activision is rolling out a plan that will allow Black Ops 2 players to chip in by purchasing selected DLC packs.

Starting tomorrow, anyone who purchases one of the 17 Black Ops 2 personalization packs on Xbox LIVE will receive a 25 percent discount. Plus, Activision, Treyarch and Microsoft will be donating all of the profits to the Call of Duty Endowment.

“This is a great opportunity for the Call of Duty community to get involved, and we’re delighted to work with Treyarch and our friends at Xbox to donate all profits from this activity toward helping vets find good jobs,” said Dan Goldenberg, Executive Director of the Call of Duty Endowment. “For most veterans, there’s nothing more important to easing their transition back into the civilian world than finding meaningful work.”

The event will end on October 14th. So, if you’re looking for an excuse to play a little Black Ops 2, this might be a good one.