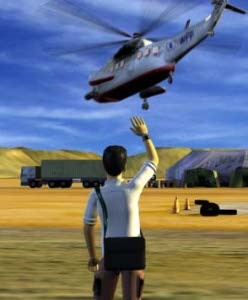 AUSTIN, TEX – South by Southwest can sometimes be a platform for activists. This isn’t unusual with documentary filmmakers or advocates of online freedoms. Even musicians can be outspoken. But game developers who care about baby seals?

Still, this year saw a panel discussion on Games for Change, named after the New York City-based non-profit that thinks a videogame can teach the world to sing in perfect harmony.

Suzanne Seggerman, who heads the organization, offers this definition of the kind of title G4C promotes: “a game which engages a contemporary social issue to foster a more just, equitable, and tolerant social model.” While the organization is largely funded by the MacArthur Foundation, they have also forged a partnership with AMD and even have a lab at The New School.

Seggerman shuffles through several slides, giving actual examples. PeaceMaker lets you play as either the Palestinian President, or the Israeli Prime Minister. The ReDistricting Game explores the very complex issue of gerrymandering.

Seggerman makes some core assumptions. That culturally, games are meaningful and evolving. Educationally speaking, “we are convinced games are great for engaging people on a civic level.” The only problem, it seems, is measuring the impact.

Eric Zimmerman, from GameLab, says he’s an advocate for games being more innovate, taking on new territory and finding other markets. “Nothing wrong with that. But I think there are a lot of problems and challenges with the ways that people approach games for change.”

The way Zimmerman sees it, most designers of games for change are very interested in a particular outcome. But, he says, “Games are not best as carriers for information. Games can carry a lot of information. But what games have uniquely is play.”

Play is the opposite of didactic rhetoric, “which is a marketing-based idea of what a game for change is.” He cites the famous Frank Lantz example of trying to design Charades, and that there’s a difference between people’s antics to reach the goal, and antics as the goal itself. “It’s kind of a weak design strategy.”

“If it’s hard to make a commercial game,” notes Seggerman, “making a serious game that hopes to change is even harder.” Zimmerman says that 80-90 percent of all commercial games fail.

Chris Swain, who serves as co-director of the EA Game Lab at USC, noted that games for change could take a lesson from journalism and try to be fact based. “It’s very hard not to have some point of view. But if you want to be credible, use objective information.” Swain cited Michael Moore’s controversial documentaries, saying he always agrees with the premise of the film, but watching it has the opposite effect. “I begin to have sympathy for the people he’s attacking because his techniques are unfair.” By contrast, says Swain, “An Inconvenient Truth was balanced, fair, and a tipping point for thoughts.”

Mary Flanagan, from Hunter College, further points out that “a lot of the games for change emerging…they’re not that fun.” One solution is looking at how designers are working. “Not what you’re trying to express, but the process of how you’re making it.”

“There are mechanics that don’t always match our content,” Flanagan continues, mentioning a hypothetical shooter about feeding poor people. At Tiltfactor, the New York City-based lab for academic study of games and activism she directs, Flanagan has developed a deck of cards designed to jumpstart creative design thinking. One deck has a game title, another might have an emotion while a third would have a cause. Drawing one of each forces you to think about the process of design as well as the activism itself.

Swain agrees that games are hard to design. That’s why you need “games where the procedure of the game tells the rhetoric of what you’re trying to persuade people of.” He talks about the existing game mechanic of the shooter. And a game about curing cancer. So the designers, naturally, have players shooting cancer cells. “But shooting cancer cells has nothing to do with a cure for cancer.”

He doesn’t see examples of people who can design and people who know social change working together. “An activism background, paired with systems designers, that’s where it becomes powerful.”

Ben Stokes from the MacArthur Foundation – which gives hundreds of millions of dollars annually in grant money – explains that they’ve switched from an education portfolio to a digital media portfolio. “Young people spend waking hours on media. The more we started looking at game systems, the more we recognized what good models they were for what learning should be.”

“It’s not just about young men playing in isolation in their basements,” Stokes tells the audience, “Games are becoming increasingly social.”

He then makes an important point about games. If they’re too hard, Stokes says, no one buys it. If a game is too easy, he continues, no one buys it. “But look at schools, which many find too hard or too easy. Games deal with that every day.”

Stokes says that instead of making games for change, you can look at where young people already are. And he says that civics may be the most natural way of learning. “People aren’t voting. It’s not because voting is hard. It’s because it’s not connected to their lives.”

He discusses a door-knocker simulation which might be given to volunteers, letting them simulate going door-to-door for a petition. If they try it the night before, it can prepare them for the real thing. They can have scripted conversations and become comfortable with the issues they’ll discuss. Some games for change can be training, concludes Stokes, while others can be entertainment.

SXSW: “Publishers are dead, they just don’t know it.”