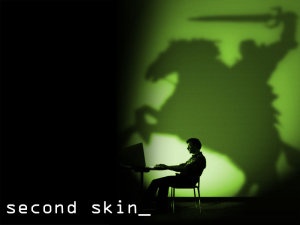 AUSTIN, TEX – The South by Southwest festival officially began in 1987, the year after Richard Garriott and Dallas Snell opened the Austin offices of Origin Systems. Garriott would go on to develop Ultima Online, which became the first multiplayer online roleplaying game to be considered truly massive.

And it’s the MMORPG which is the subject of Second Skin, a new documentary that premiered at the start of SXSW this week, looking at the lives and relationships of gamers.

The festival itself is an enormous event – spread across town and across weeks – where 1600 bands from across the world come to play. In 1994, film and interactive festivals were added. And now it’s the place to premiere your serious documentary and be recognized as a directorial talent.

For the young, the independent and the cool, SXSW is a place where dreams are realized; old lives are left behind, and hope for the future is bright. Which is why the context of Second Skin‘s premiere is almost as important as the content of the documentary itself.

This year at SXSW, games are mainstream. There are documentaries about 8-bit chiptunes and Nerdcore Rising. Jonathan Coulton, of Portal fame, is singing everywhere. There are themed parties, from Opera featuring the Wii, to Rock Band being used by Hot Topic (that’s right: everyone’s favorite emo chain store now loves videogames), and a major showcase from GameTap, Turner’s subscription game service.

Several years ago, event organizers recognized that games were ascending, and now SXSW has a series of game development panels, called Screenburn, and a free-to-the-public show floor, called Screenburn Arcade. (Between the Frag Dolls, Wizards of the Coast, and the draft pick of the Championship Gaming Series, it all feels a bit like the E3’s of old.)

That’s the scene where Second Skin was first seen by the world. Production started in late January of 2006. The film’s director/editor, Juan Carlos Piñeiro, and producer/writer Victor M. Piñeiro III describe themselves as staunch console gamers. Only producer Peter Schieffelin Brauer was an MMOG player before starting the project.

After the screening, Piñeiro told The Escapist “While we made this movie, we ended up having to play less and less games as we went on. We miss gaming. We want to go back to gaming.”

Brauer and Piñeiro worked on The Apprentice, doing sound mixing and cinematography, respectively. But their film reflects the values of an Apple commercial. The music twinkles, the cutting is rapid, the backgrounds are often stark white. And most of all, we’re told these are real people, just like us, super-authentic and, therefore, compelling.

The film begins by showing a subway. A voiceover tells us that we’re isolated, disconnected and alone in the world. We have no friends, no family, because technology has set us adrift.

Edward Castronova, a professor known for his study of MMOG economies, sets the stage by explaining how complex these worlds are. Gordon Walton, head of Bioware Austin addresses the basic human drive “to become more than we are.”

And we’re off. In the next five minutes, the audience will meet several hundred guild members, a game addict, two people who fall in love in a virtual world, and four roommates living the gamer dream. 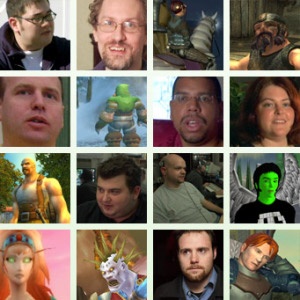 As one reporter remarked afterwards, “This is everything we’ve been writing for the last five years.” Which is true. But film is one kind of document; newspapers and magazines are another. Reportage must be fresh, but a movie can take it’s time, because movies, we are told, will last forever.

Perhaps “movie” is the wrong word for Second Skin, which seems closer to machinima with occasional interviews of real people intercut for color. If you’ve never spent time in a virtual world, Second Skin will solve that problem by showing perfectly cinemagraphed scenes of magical forests, avatars bounding across the countryside on gleaming white tigers, and even raids, without all the nasty text overlays and voice chat that normally get in the way.

These are filmmakers who understand context, too. So we’re shown charts. Happy charts, featuring the universal man. We see that millions of people play online games. Like 20 million, or maybe it’s 50 million – that doesn’t matter, the point is, it’s a lot.

Then, we’re whisked off to Fort Wayne, Indiana, a place the filmmakers tell us is an epicenter of gamers. For a metro area of half a million people, perhaps Fort Wayne must be measured by percentage instead of volume. But no matter: We’re confronted with four average gamers who are more than willing to describe their compulsions with lighthearted candor.

We begin to get the idea that gamers are a cross between drug dealers and the protagonists of country western songs who have lost sweethearts, houses, dogs and trucks. Nor does this impression change when we meet the gamer who talks about how he became addicted to World of Warcraft, how his life fell apart, and how he just wanted to die. After playing enough of the game, “the real world looked fake.”

Of course, he finds a halfway house for gamers, complete with a twelve-step program – Online Gamers Anonymous. But he falls off the wagon, returns to his MMORPGing ways, and must finally face the addiction on his own.

“I think people who roleplay have more problems than anyone,” his cousin tells the camera. Which might be the central theme of the film. Edward Castronova predicts an exodus from reality to virtual worlds. Maybe, he theorizes, this is an indictment of our society. Perhaps it’s so broken that we can only find wholeness by retreating into synthetic spaces.

As the film continues to follow the lives of the characters, we meet gold farmers, have our four weddings and a funeral, finish our popcorn and leave happy. Documentary nuts walk away having seen a window into yet another strange world. And gamers walk away feeling like they had seen seen their life story, with slick editing, a peppy soundtrack, and the seductive polish of an Apple commercial.

SXSW: Can Games Change The World?

SXSW: “Publishers are dead, they just don’t know it.”