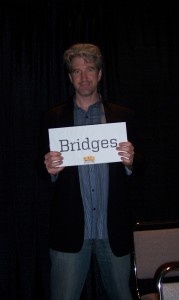 Bridges is the frontman for Multiverse, a company that’s creating something between MMO middleware and a platform for virtual worlds – all strictly free-to-use tools, with simple ten percent revenue sharing on the back end.

The venture boys in Silicon Valley listen to Bridges, because he’s got the cred: from a management position at Netscape, and from launching both Netflix and ZoneLabs. The four Netscape vets who started Multiverse are all staunch gamers, particularly of MMOs, which Bridges always describes as “the killer app,” that will draw everyone into virtual worlds.

And he can be trusted, because Bridges is an old-school pen-and-paper player, too. At least, he would be if he had the time. “I still read the manuals,” he admits, adding that he loves to see how the systems would work.

But one system he sees dying is the traditional videogame publisher model. “Is it worth saving? Many people, potently most employed in videogames, say ‘fuck no!'”

It all starts with economics, he says. A game might take ten million bucks to start with. He gives the example of Blizzard, which made a game that “almost brought down the whole damn company.” He cites insiders at the company who revealed that World of Warcraft nearly bankrupted parent Vivendi Universal Games.

Another top-heavy title was The Matrix Online, which Bridges says cost $20 million to make. “It was a dog, buggy, not fun.”

“The videogame industry right now,” explains Bridges, “is geared towards the hardcore game.” The companies spend a ton of money creating these games, which means they’re forced into very conservative choices. “There are only two or three dozen spaces in a retail store.”

“Even if you’re indie, you only get 20 percent of retail,” Bridges laments about the margins. “Tight, tight, tight.”

The result has been what Bridges termed the “Calcifications of Genres.” Something that’s a “very conservative, creaky structure.” To illustrate, he brings reading from The Scratchware Manifesto.

“Videogame designers are the new rock stars,” he states. But sometimes, “you find that you’re just a sad little cog for a monkey in a suit. There’s a huge amount of discontent inside the industry.”

This is why Corey Bridges can publicly predict the rise of the indie developers and the fall of the big publishers. And he sees the fact that broadband matches up with distribution.

Rattling off a slew of NPD numbers, Bridges tells the audience: “Right now, it looks like everything is rosy.” But distribution is the apple-cart of the games business. “Pushing bits instead of atoms will upend your whole industry.”

Bridges says that middleware is opening up development for indies, and that when you let those indies in, “it’s a replay of what we’ve seen in toppling other traditional industries.”

He recalls a recent session at GDC about making Facebook applications, and the fact that the audience was filled with senior executives from publishers, struggling to make the leap, something that must happen when virtual worlds and social networks intersect. “It’s probably going to happen this year,” Bridges says, “Q4.”

The core tenet of Bridge’s Rise of the Indies speech is that middleware has leveled the playing field, and that digital distribution will undercut publishers. This means that, economically, creativity can flourish in the games industry once more. “If it costs $100,000 to make, suddenly you don’t need 100,000 consumers. You might need 5,000,” says Bridges. This means “people follow their bliss.”

It also means considerably more niche content. Bridges talks about one Multiverse developer making a game based on Victorian class conflict. “Fascinating new content…that’s what happens when you change the economics.”

The notion that games are for kids will change, says Bridges. Self publishing will force old publishers to coalesce. “Someone’s got to push atoms,” he says, just as there are still newspapers in the age of online news.

Publishers like EA, says Bridges, will still have a place – if not in distribution, in financing – while they still have money. They can bring talent, and manage process. “And of course, marketing will be important, even if it moves online. The publishers will fill those niches, but they’ll compete with the boutique firms that do the same damn thing.”

“Publishers are dead, they just don’t know it yet.”

SXSW: Can Games Change The World?