I recently played through the 15th Anniversary Edition of Another World, known in the US as Out of This World, and walked away deeply affected by this game. There are many older games I can appreciate for what they were, but almost none that resonate with me for what they still are. Another World is, and I mean that very much in the present tense, a masterpiece of visual story telling. The lesson it imparts for narrative games today is one that our best story tellers already know and yet far too many games ignore: they key to a good game narrative is visual variety.

To provide a little context, Another World is a game created by Eric Chahi that was released on the Amiga in 1991 and ported over to other platforms in subsequent years. It falls into a loosely defined genre called the cinematic platformer. The genre is defined by a group of games starting with Prince of Persia and that later included titles like Abe’s Odyssey. They are platformers that eschew the floaty physics and improvisational gameplay of Super Mario Brothers and instead require deliberate actions to clear certain areas. Gameplay resembles a kind of reflex oriented puzzle solving. Poorly defined as the title may be, it’s safe to say that if Prince of Persia established the gameplay that defined the genre then Another World was responsible for inspiring the cinematic moniker.

Compared to Another World, the storytelling in many of the current era’s major games is staid and primitive. There are narrative techniques in games that, because they work at some marginal level, have become nothing less than dogmatic principles a developers are expected to abide. Consider the cut scene: It is a sorely abused narrative device that usually ends up delineating two separate portions of gameplay. It was no small shock to me when, instead of watching Lester, Another World‘s protagonist, die at the fang of a strange creature in the side scrolling perspective the game’s play takes place in, the game switched to a cut scene where the fang on the creature flicks out and slices at a close up of the character’s knee. It’s a brilliant use of cut scene that takes the player from the confines of a two dimensional world into the temporary perspective of a three dimensional one. The world, in the player’s imagination, is indelibly changed into a much larger and more detailed place with that small cinematic.

Another World also has a keen sense of the visual planes available in even a side scrolling game. Often there is action occurring in the foreground and background of the game at key points that emphasize the chaos or danger of a situation. It’s unexpected when it occurs, and gives the game’s story a sense of immediacy. Another World is remarkable for the sheer number of perspectives it uses, despite falling under the designation of a side scrolling platformer. It shifts between the perspective of the gamer, a passive viewer and even, in brief moments, the main character. In doing so the game becomes visually interesting: its setting more evocative and its moments of trauma more dramatic.

Also interesting are the moments in which the perspective of the character, even in the fixed state of a platformer, changes radically. At one point Lester turns sideways and rolls through air ducts. In changing the characters physical orientation frequently, the player is given more cues about the space around him. Environments are more than abstract obstacle courses in which the character repeats the same moves. They become real environments that force the character into strange and unique positions. All these small touches serve to create a sense of place and personality in the totally silent Lester. 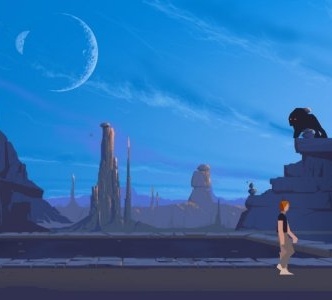 The lack of visual variety in videogames will continue to rear its head as more ambitious narratives are attempted. I should be clear that I don’t think of visual variety as the large set piece in the form of the next big monster towering over the player, but rather how the game forces us to interpret this set piece. Too often in third person action games, we’re given an over-the-shoulder perspective for a character and fixed to it for the entire game. Some will argue that it is unfair to make a direct one to one comparison between Another World and today’s 3D action adventure games. After all, the fixed perspective of a side scrolling platformer means there are necessarily fewer challenges to making a control scheme that flows with these changing camera perspectives. Yet, as Jordan Mechner proved in Prince of Persia: The Sands of Time, if done correctly, the 3D action adventure game can be as tightly controlled and as visually dynamic as the best cinematic experiences.

There are other memorable developers who use the techniques that were popularized, if not pioneered, by Another World. Star Breeze’s Chronicles of Riddick: Escape From Butcher Bay also comes to mind as a game that used many perspectives to enliven the storytelling possibilities of the FPS genre. However, there are too many other games that are content leaving solid gameplay and decent story as elements mutually exclusive to one another. The observation and planning necessary to properly fuse these two elements together is often ignored, in even the biggest games, because it is a labor intensive effort that may not always pay off.

Call it the Kojima Conundrum – the effort to find that perfect balance between gameplay and storytelling. Hideo Kojima is, perhaps, one of the greatest hit or miss practitioners of the balance Chahi so delicately achieves in Another World. When it works for Kojima it really works, as in the first scene of Metal Gear Solid when players hide behind the warehouse carton and see the camera zooming in to show the tense moment when the guard walks right next to the box Snake has flattened himself against. The moment becomes a face off of stealth that defines the games primary mechanic and the tension it creates. But when it fails, when cut scenes drag on for twenty minutes or more with little character interaction, it’s the kind of dead air space that we all dread.

That’s the risk developers must surely be weighing when they think about making a game that’s discretely broken up into sections of uniform gameplay and establishing cinemas, versus one that’s an amalgamation of carefully placed camera angles and visually unique moments of game action. Certainly the former option is the safer bet because if the gameplay is right, players will likely enjoy and recommend the game to others. It will be an experience fondly remembered for a few days and if the mechanics are truly well executed it might even be a classic.

But too often, I think, games quietly bypass the route needed to create truly effecting narrative, the route that pits games against films, with films often blinking first in the showdown. It’s a difficult path, one that necessitated a two year development time for Another World and again a six year development time for Chahi’s next game Heart of Darkness. But, as more developers follow in Chahi’s pioneering footsteps, surely a narrative language unique to videogames will be codified and eventually co-opted into more than just a handful of endeavors.

Tom Endo found his copy of the 15th Anniversary Edition of Another World through Ebay and found it was worth every single one of the 20 dollars he paid for it.