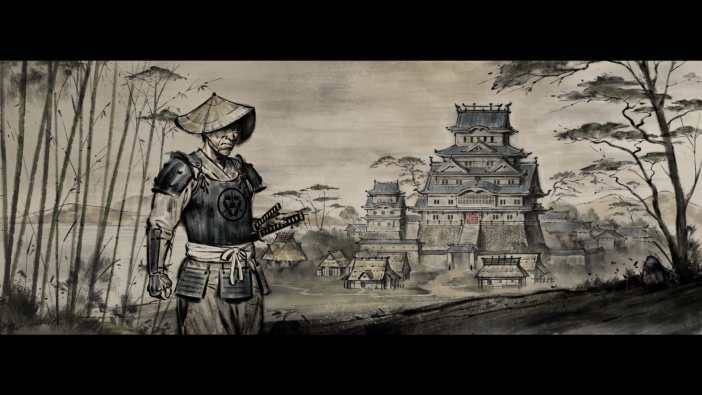 With the RPG Tale of Ronin, Dead Mage, the team behind Children of Morta, is tapping into universal human uncertainties. As the title implies, the game is about a ronin — a masterless samurai — and a quest that will explore the internal conflicts of a warrior whose sense of purpose has been upended.

“I think, to a high degree, that the contemporary man is a ronin because we disconnected ourselves from the mental structures of the past,” said Fassihi. “Structures that brought us psychological safety. We are left alone in our search for meaning. We are left alone with our existential anxieties.

“I believe many deep questions arise for a samurai when he becomes a ronin, issues stemming from the conflicts of duty and conscience. We would like to let the player decide the answers to these questions.”

That conflict is embedded at the center of the game’s narrative, as the ronin struggles with what is expected of them. It is a quest for revenge to regain the honor of the samurai’s former house. “However,” Fassihi added, “the central question in this main narrative is — to what extent should a warrior of a clan choose to follow duty and be loyal to the house? What will be the role of the conscience?”

By focusing on the internal turmoil of the individual, Dead Mage hopes to provide a perspective on the samurai not usually seen in other media. Video games such as Nioh, Yakuza Ishin!, and the upcoming Ghost of Tsushima are just some of those that position samurai as their central characters, but Fassihi argues those offer relatively simplistic portrayals: “They usually focus on the warrior aspect and fighting of the samurai.”

In this approach, they reflect a much wider narrative tendency. “Most other media, following the image created by authors like Inazo Nitobe, portray the samurai as soulless killing machines with no emotions, especially no fear,” said Fassihi. “They articulated the samurai code, Bushido, and considered it to be holy for all of the samurai.”

However, that portrayal has not been universal. In particular, Fassihi cited the films of Akira Kurosawa and Masaki Kobayashi as inspirations for Tale of Ronin.

“Their works have usually looked at the samurai from a humanistic aspect, and they have analyzed their challenging lives,” said Fassihi. “The samurai, being human, have emotions, have doubts, feel shame, and this becomes evident, especially when one of them loses the ties to an organized system, the clan, and becomes a ronin.” 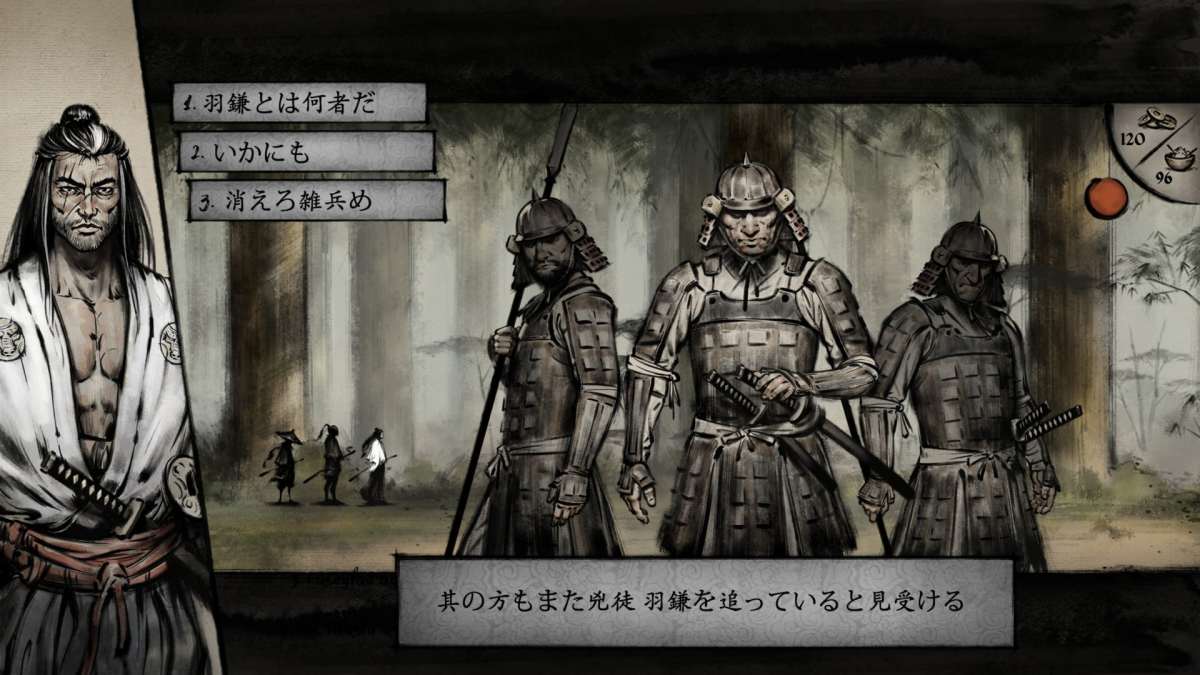 Dead Mage is channeling that same spirit of deep introspection, endeavoring to enable players to “delve into the existential anxieties of a ronin,” a person searching for new meaning after a life of hierarchy is over.

Fassihi attended elementary school in Japan during the 1980s, which sparked a love for the local culture that he has carried with him throughout his life. However, Tale of Ronin is particularly inspired by the history of Japan before the Meiji restoration in the 19th century. And Fassihi was not alone in the desire to explore this topic and setting. Artist Kamyar Nasirifar has been another driving force of the project.

“He had a strong desire to study Japanese art and aesthetics and come up with a unique look and feel for Tale of Ronin,” said Fassihi. “A visual style that would be loyal to traditional aesthetics while looking modern.” The result of that is the evocative sumi-e-inspired aesthetic, which effectively captures the fantasy-shaded realism of the game’s setting.

Dead Mage is not aiming for total historical accuracy, though it will tap into Japan’s long association as “the land of the gods and the spirits.” Supernatural beliefs and “mythological interpretations of what goes on in the game world” will be present, but Fassihi maintained that the story in Tale of Ronin “will be as real as it gets for a skeptic that believes all such thoughts are mere superstitions. But if you allow yourself to doubt reality and embrace the unreal, then you can expect a lot.” 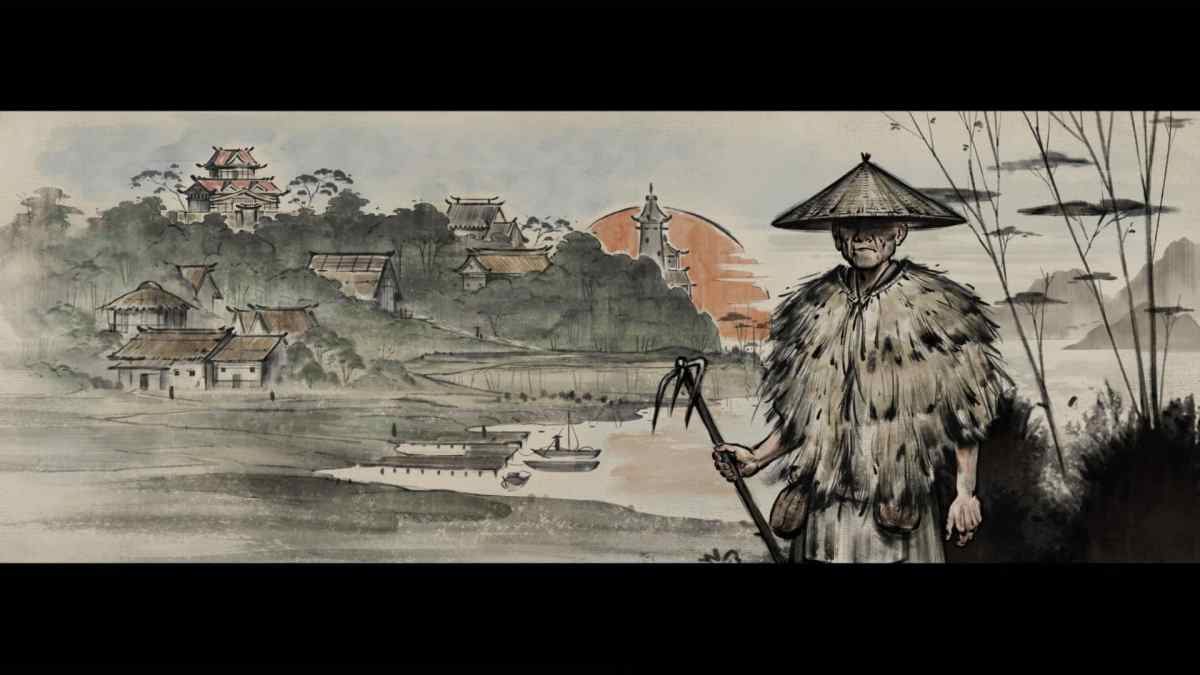 Still, a wide breadth of research has gone into developing the world, including “many manga and anime, books on Zen, novels set in Edo period, Japanese supernatural stories, books on Japanese religion and aesthetics,” in addition to documentaries, Japanese museums, and other video games. Members of the team also live in Japan.

Beyond the world, this research has also influenced system design. For example, for combat, the team has crafted a bespoke “simultaneous resolve turn-based system” called Hachiman. Where other systems simply let combatants batter each other, Hachiman was designed to “simulate the actual sword fight with a turn-based system” and “to look and feel like a real katana fight.”

In practice, this boils down to a battle of will as much as skill. After a move is selected, both the player character and enemy act at the same time — one attacking while the other must guard. As Fassihi explained, “The offense can have one of three results: you either hit the body of the opponent, hit its weapon as they block, or miss while the opponent deflects your move. If the opponent parries and they planned to attack, they would counter and strike right away; you will be forced to defend. That will be the end of a turn.” 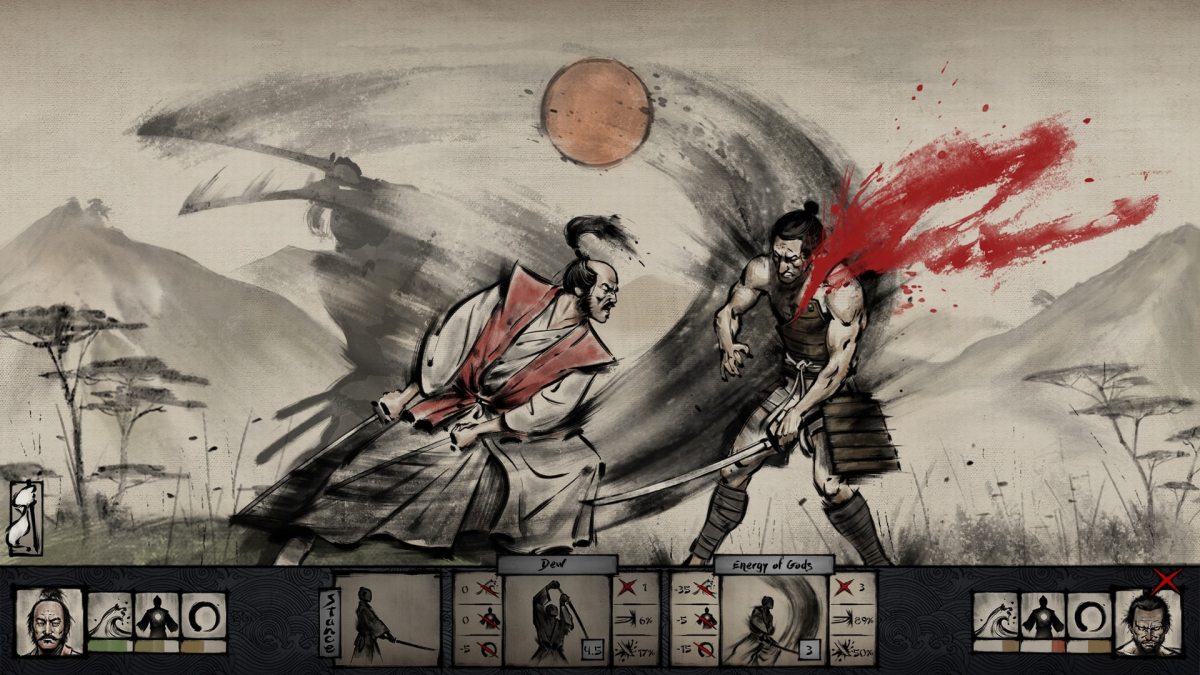 The likelihood of success will depend in part upon three stats — energy, courage, and mind — which contribute to the overall focus of each combatant. “Trying to reduce the focus of your opponent to find an opening to attack can be a sound strategy,” said Fassihi.

Narrative events will also influence battle psychology and will be powered by another set of stats that measure the protagonist’s mental state. This system is designed to tap into the team’s mission of humanizing the ronin and presenting the realities of their conflicted life of revenge, uncertainty, shame, and friendship.

Fassihi provided a handful of examples of how this idea will emerge during the gameplay experience: “Camaraderie is a gameplay stat for the characters in a party. It is a bond between them. This bond could increase or decrease based on their shared experiences, whether adventuring or in combat. The value of camaraderie will then affect the narrative events or the battle.

“The reverse of ‘honor,’ which is ‘shame,’ is another important stat for the characters. The gamer needs to make sure this shame does not exceed a specific limit. The value will affect the game narrative. Betrayal can happen everywhere in the story.” 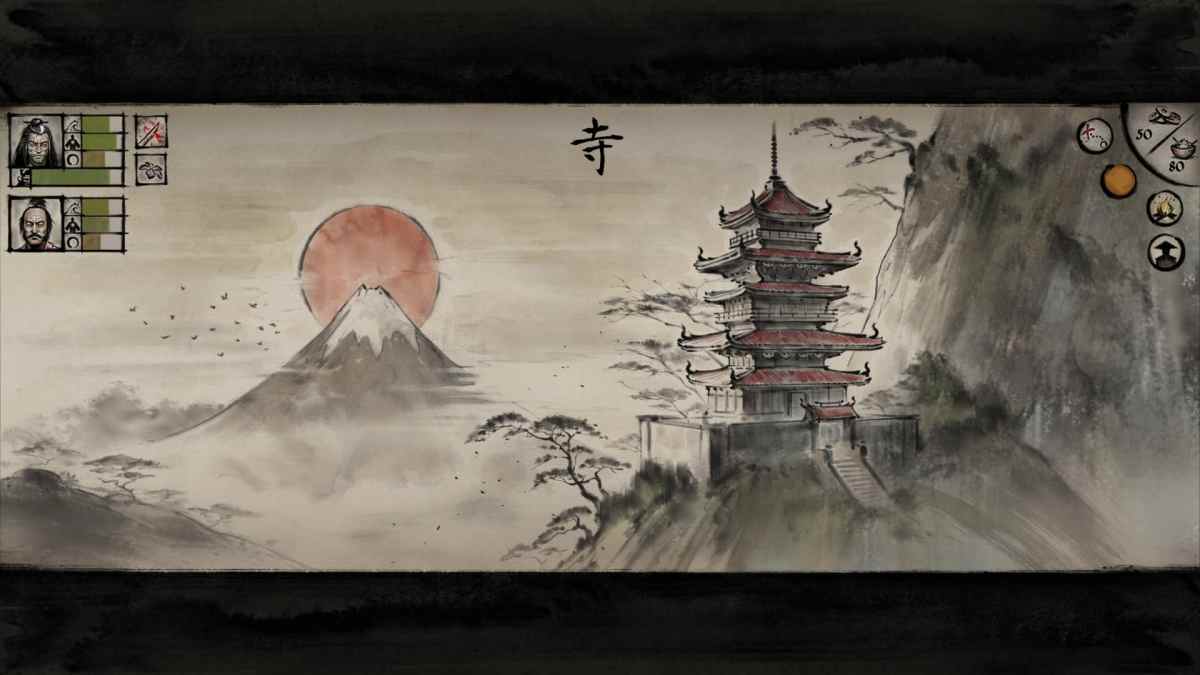 Dead Mage burst into the spotlight last year with Children of Morta. Beyond just critical acclaim, that game has trickled into the public imagination, with an episode title in the fourth season of Rick & Morty referencing the game. Fassihi and his team are motivated to meet the elevated expectations that fans and critics now have for them.

“Samurai culture, narrative, and turn-based games have their unique, knowledgeable fans, and we are trying to make an excellent game for them to enjoy,” said Fassihi.

Moreover, the team learned much during the five-year development of Children of Morta. “Being an indie team,” said Fassihi, “we learn every day how challenging it is to aim for quality while satisfying the production constraints. There can be two strategies for overcoming this problem: sacrificing quality to fulfill the production constraints or sacrificing time and money to reach the intended quality. Children of Morta taught us that our decision to ‘never sacrifice quality’ turned out to be truly valuable.”

Along those lines, during Children of Morta’s January 2015 Kickstarter campaign, the intended launch window of the game was October of the same year. The game ultimately launched in September 2019. 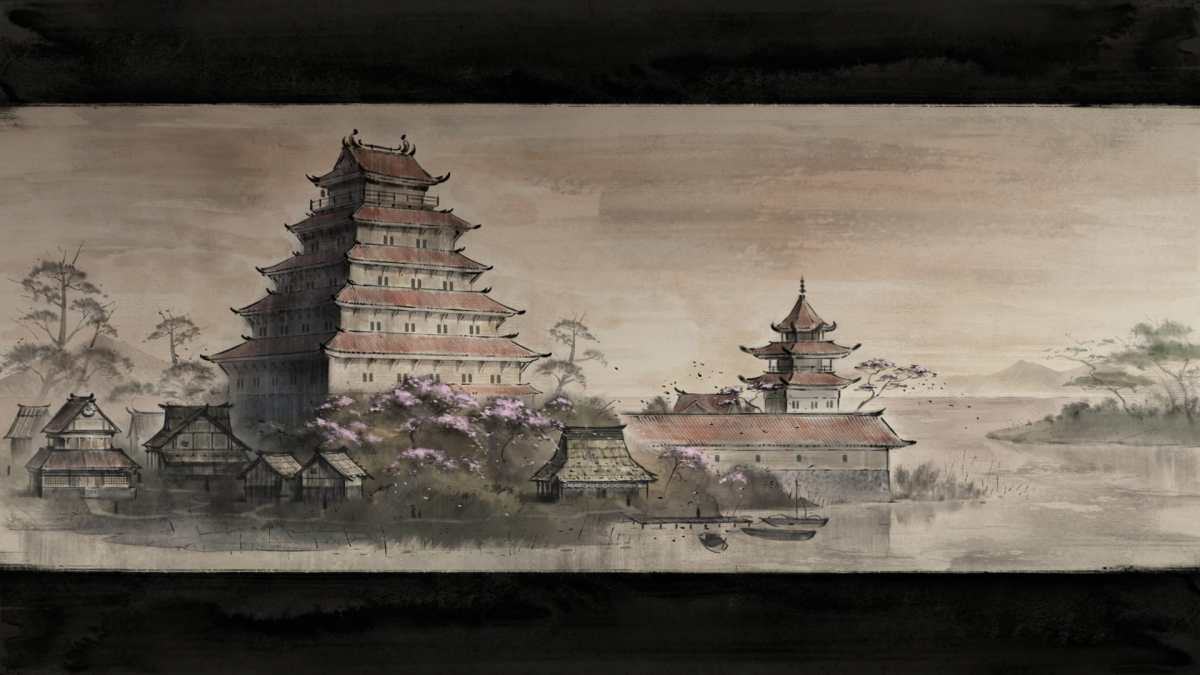 Similarly, Tale of Ronin has been in development since 2016. A crowdfunding campaign is under consideration after Children of Morta benefited from fan feedback, but the team is already preparing to engage its community more actively in the near future. There are Tale of Ronin Twitter and Instagram accounts with plans for a Discord server.

Fassihi seemed confident that, even if a crowdfunding campaign takes place, production of Tale of Ronin will not see the same protraction that Children of Morta did: “At this point, we know that it will be sometime in 2021.”

The team must balance creating Tale of Ronin with finishing Children of Morta’s post-launch content, but it stands in good stead, with the foundations already firmly in place. Tale of Ronin is shaping up to challenge more than just the player’s skill. It promises to be a deep, evocative, and engaging exploration of a troubled psychology — one that the player will be able to shape and influence, while ultimately being challenged to face some of the most pressing issues in human life.

“Existential questions regarding death, solitude, freedom, and meaning will arise in the game narrative,” said Fassihi. “Thinking about these questions is what we hope the player will take away from this game.”