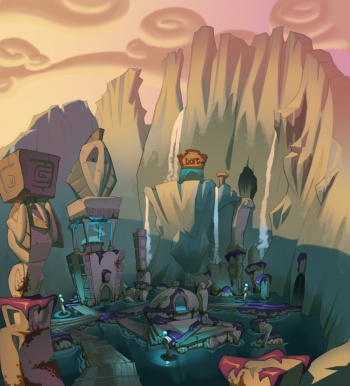 There are few games series that have as loyal a following as Monkey Island, so being tasked with relaunching the franchise is a daunting prospect. This is the unenviable situation that Telltale Games find themselves in, trying simultaneously to cater to the old fans, with their treasured memories of games gone by, and appealing to a new audience, who don’t have a clue who Guybrush Threepwood is, or why they should care about root beer or dairy farmers. But as Tales of Monkey Island‘s writer and designer, Mark Darin, told The Escapist, Telltale had a plan for achieving just the right balance.

“We knew that after a decade, we had not only a ton of fans to appease, but a whole new audience to introduce Monkey Island to. It was important to make sure that we set ourselves up to tell a story that would reference the past games just enough to make fans smile while making a whole new story that newcomers could jump right into,” he says. “Luckily many of the jokes that reference older games are still funny on their own! The important thing, I think, is that the story remains fresh and that most of the jokes are relevant to the story being told.”

The accessibility needed to draw in a new audience can sometime require hard choices. Darin cited the series stalwart “insult sword-fighting,” from which many of the series’ most memorable jokes stem, as an example. “It’s been done to death!” he says. “Some form of insult fighting has been in three previous games, each time the formula added a new twist but it also seemed to get less fun. The last thing we wanted to do was run it further into the ground. It’s something we gave a lot of thought to as designers. We decided that we would reference Insult Sword-fighting, but not ask the player to actively take part in it.”

Making the game appealing for new audiences meant some other old favorites had to be left behind, a fact which may not sit well with longtime fans of the series. “Some old faces will occasionally make an appearance, but for the most part, Tales of Monkey Island takes place on a whole new set of islands, having too many old characters return might feel forced,” Darin explains.

“In episode two, Guybrush will visit a sunken city populated by the ancient race of people who built the mysterious stone devices on Flotsam Island. Also, we’ll finally catch up with Elaine and LeChuck and start to figure out what happened after Guybrush turned LeChuck human,” he continues.

We’ll be there waiting, grog in hand.