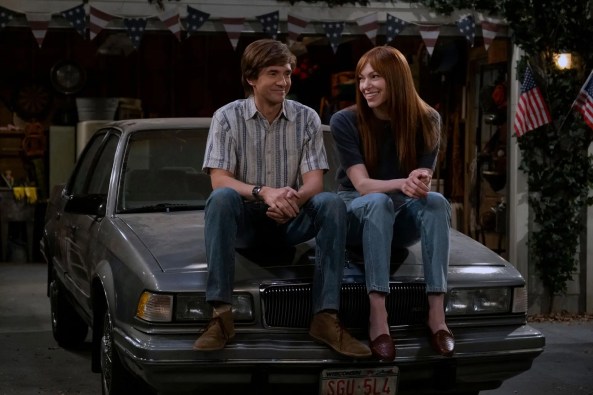 Well, Netflix didn’t keep the lid on that very long. When the initial trailer for That ’90s Show dropped, the series teased the return of Kurtwood Smith as Red and Debra Jo Rupp as Kitty from the classic sitcom That ’70s Show, but it left it up in the air if anyone else was coming back. The second That ’90s Show trailer does not do that, basically confirming the return of everyone from the original show except, you know, the guy with the legal trouble.

The new series brings us back to the home of the Formans, except now Red and Kitty are grandparents. Leia (Callie Haverda), their grandaughter, comes to visit and instantly makes friends with the rebellious daughter of their neighbor, Gwen (Ashley Aufderheide). Seeing an opportunity to be less boring, Leia convinces her parents to let her move into grandma and grandpa’s, and the adventures kick off yet again. They’re joined by a few other friends, including Jay Kelso (Mace Coronel), who is the son of Kelso and Jackie, making for even more descendants of the original series. As the new trailer shows, not much has changed overall, with the kids still getting high in the basement, Red still being a grumpy jerk, and Kitty still being the best mom ever.

What is new is that we get to see a bunch of the old cast returning. Topher Grace, Mila Kunis, Ashton Kutcher, Laura Prepon, and Wilmer Valderrama are all returning for special guest appearances in That ’90s Show. Valderrama gets the most attention in the trailer as he seems to have become a hair stylist in town. It’s also interesting to see Prepon and Grace back together as their characters’ future was unclear at the end of That ’70s Show, but it appears they’re happily married and working together at figuring out how to raise their daughter. It is a little weird that, while everyone else has grown up, Topher Grace hasn’t aged a single day.