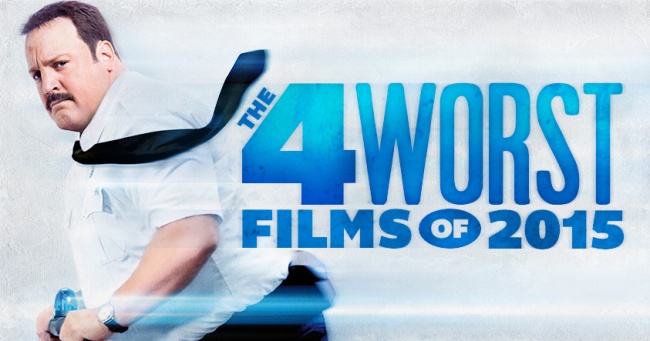 When I was talking about the best movies of 2015, I mentioned how the year was one of extremes. The really good movies were excellent, and the really awful ones were the types that made you want to vomit. Picking the films for these lists is made more difficult when so many films fill the very ends of the spectrum. Like with the Best Of 2015 list, this list also has several movies easily bad enough to be on there. I decided I’d only include two comedies (half the list), so Unfinished Business couldn’t be included (although it, more than any of the other honorable mentions, deserves a slot). Fantastic Four, Minions, Love the Coopers, Sinister 2, Hotel Transylvania 2, Poltergeist, Victor Frankenstein, Max, The Gallows, and Pixels also had a definite chance of making the list. However, these 4 films are the ones I went with for the worst films of 2015, presented to you in alphabetical order.

Horror movies with a central villain are at their scariest when there’s some mystery surrounding the “thing” that’s killing/haunting/stalking/whatever. The more you see the monster in the closet, the less it looks like a monster and the more it looks like that one moth-eaten coat you never wear. The point is, the more you show the villain, the less frightening it becomes. Given that Paranormal Activity: The Ghost Dimension is the sixth film in the Paranormal Activity franchise, most – if not all – of the mystery is gone. However, if there was anything we still hadn’t found out, this film ended that. Its whole premise is to show us the ghost that haunts families and explain to us its motivation.

Where do the scares come in? Well, they don’t. This is one of the least terrifying horror movies – that wants to be scary – out there. It’s also shot in a found-footage style, which is both annoying and ugly, was released in some of the worst 3D you can see, and has special effects that wouldn’t pass inspection in the late 1990s. With awful characters, terrible acting – both from the adults and the child – and an awful ending, this is just awful from start to finish.

The people behind the franchise claim that this was its conclusion. While only time will tell, the film still made 7x its budget and opened the doors not for a sequel, but for a spin-off franchise. Can we just not? This is the one that explained everything away – or at least tried to – and much like the Saw franchise before its “conclusion” (they’re still planning another one) the returns have diminished to the point where it soon won’t be worth it. Just stop. Take time to regroup, replenish the creative juices, and make something worthwhile.

When it was released, I claimed that Paul Blart: Mall Cop 2 would be the worst movie of 2015. And while The Ridiculous 6 came along and was a worse movie, it also didn’t get put in theaters and, therefore, may not “count” for many critics’ lists. But we’re not there yet. Paul Blart: Mall Cop 2 is a film that contains a whole bunch of terrible, terrible attempts at comedy – most of which consists of fat-shaming and “daddy knows best” garbage – and combines it with terrible acting and a rehashed plot from the first film.

Paul Blart has never been a character who’s easy to root for, and I can’t understand why the filmmakers expect us to do so. He’s a jerk, he’s controlling, he’s rude, he’s clueless, and he’s smug. But we’re supposed to cheer for him because … he’s our protagonist, I guess. Sorry, but no. That’s WWE logic. And guess what? You don’t want to be using WWE logic.

Beyond the attempts at comedy – which even 6-year-olds would struggle to find funny – there’s just nothing even remotely redeeming about Paul Blart: Mall Cop 2. The action is terrible, the characters are awful, it’s poorly shot, it looks incredibly cheap – despite taking place in a fancy hotel – and it feels little more than an excuse for its actors to go on a vacation. And that’s what it is, since it’s a Happy Madison production – the company behind many of the worst movies being created nowadays.

I have a pretty high tolerance for bad movies. The Perfect Guy is one of the only ones this year during which I wanted to walk out. It’s a PG-13 stalker-thriller that doesn’t have any sense of danger or thrills. It takes itself far too seriously, in spite of its ridiculous premise, which ensures that you can’t have any fun laughing along with it. It’s not dark, it’s not suspenseful, and it feels like it’s far, far too long, even though it’s only 100 minutes.

The film sees Sanaa Lathan break up with her boyfriend (Morris Chestnut), find a new guy (Michael Ealy), and then discover that the new guy is maybe dangerous and very likely a stalker. But these characters are so bland, the acting so dispassionate, and the film containing them so terrible, that you can’t even begin to care about what’s happening. Will Ealy stalk Lathan to the point that one of them must die? Who cares?

Few movies can do this premise well, particularly in 2015 where we all have cell phones, advanced security systems, and so on. 2015 tried this twice, with The Perfect Guy and The Boy Next Door. Here’s hoping that 2016 won’t. It just doesn’t work anymore, especially like this. The Perfect Guy is the worse movie, simply because it’s too self-serious, but neither film should exist. I wanted to walk out of The Perfect Guy, which is such a rare feeling for me that, well, I felt the need to mention it.

If The Ridiculous 6 was released in theaters, it would unequivocally be the worst film of 2015. But since it was released direct-to-Netflix – a move that tarnishes Netflix’s brand name – it’s hard to say if it even counts. But this is my column, and I reviewed it, so it’s going on the list.

Adam Sandler is a plague among the film industry, and 2015 was his worst year yet. He starred in and co-wrote The Ridiculous 6, his other two acting roles could have easily been included on this list, and he helped produce Paul Blart: Mall Cop 2. I mention all of this because it’s more enjoyable than talking more about The Ridiculous 6, a film that’s unfunny, racist, poorly shot and acted, doesn’t understand how to flow, and runs for an unbearable 119 minutes long.

If you needed more reason to hate The Ridiculous 6, how are these? Vanilla Ice plays Mark Twain. A rapping Mark Twain. And its main running gag is that a donkey has explosive diarrhea. If that’s not indicative of a complete lack of quality, I don’t know what is. There isn’t a single good thing about The Ridiculous 6, and I feel worse off from having seen it. Watching it cost me two hours – two hours I’ll never, ever get back. It’s the type of film that makes you physically ill and then filled with regret. It’s astounding that it doesn’t make its actors feel those same feelings, but I guess heaps of money can rid the conscience of any bad feelings.

The Year That Christmas Was Awesome