Because we care, here’s EVEN MOAR Cosplay from the first two days of PAX East, with a special appearance by someone combining a lot of Breaking Bad seasons 4 and 5 into a single costume.

As it turns out, with so much of The Escapist staff at PAX East, we’re overflowing with pics featuring the convention’s best cosplay. We know by now you’re probably gearing up for tonight’s Game of Thrones, but before you have your minds blown (trust me, just trust me), why not spend a few minutes checking out the cosplay goodness?

Prepare for everything from Breaking Bad to even more Legend of Zelda, but first, we’ll start with cosplayer James Derway dressed as Bane, who wants you all to know that He Is Boston’s Rchthoning. 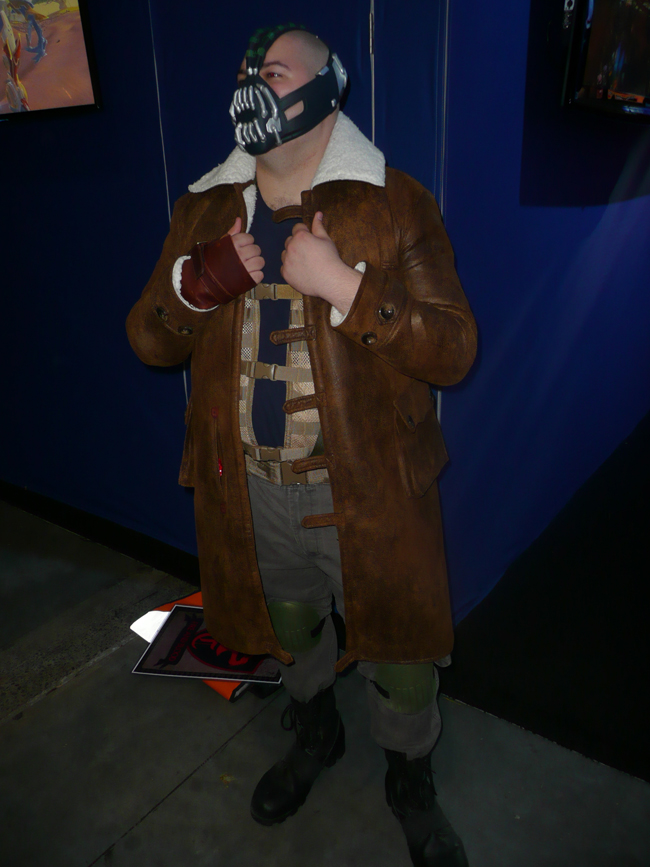 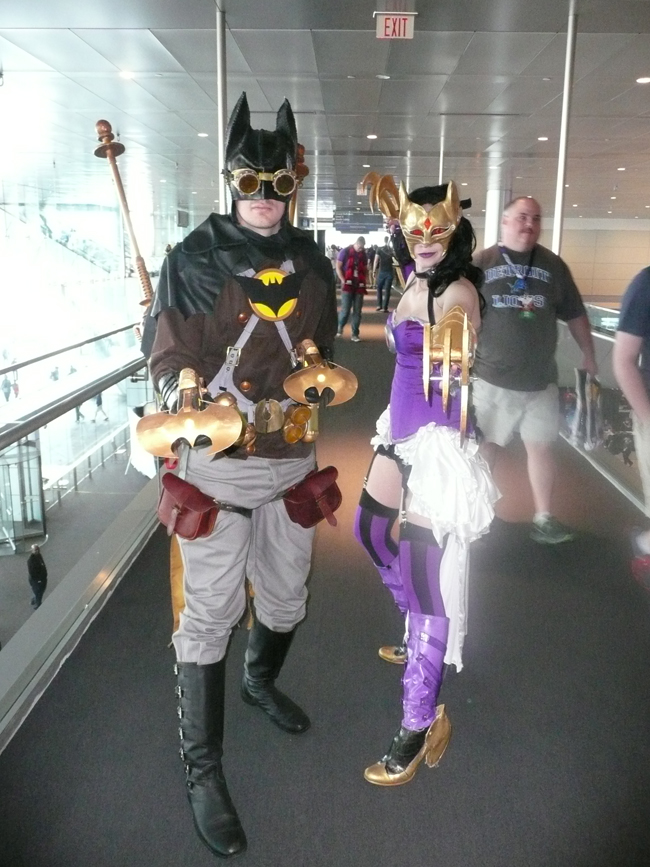 Here’s Tori McKenna and Josh Phelan as Gaslight Catwoman and Gaslight Batman. You can see more of their stuff at Cool By Proxy productions. 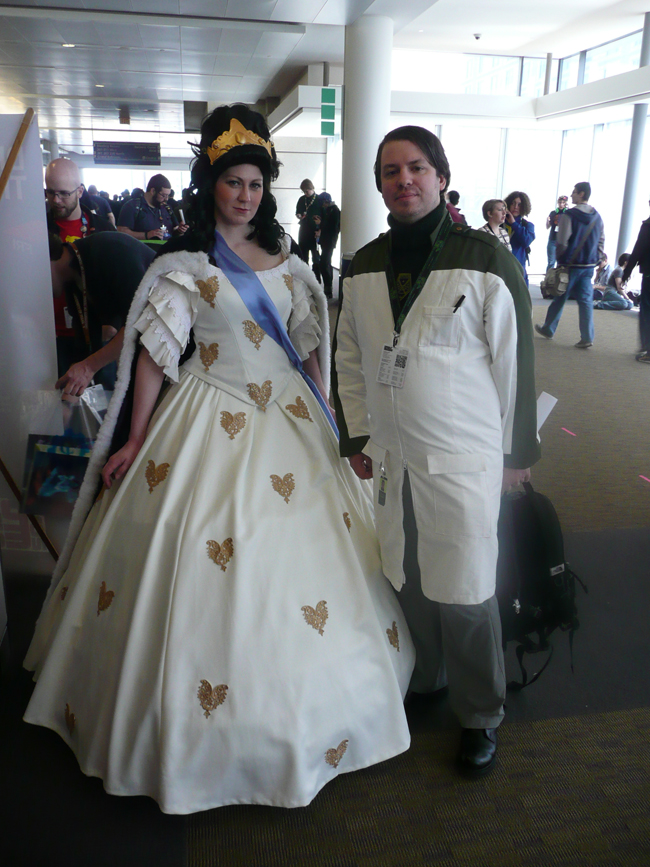 Here’s Samantha Galwood as Catherine the Great from Civ V (we intervied her too, read it here!), and Matt Stawarz as Xcom’s Dr. Vahlen. 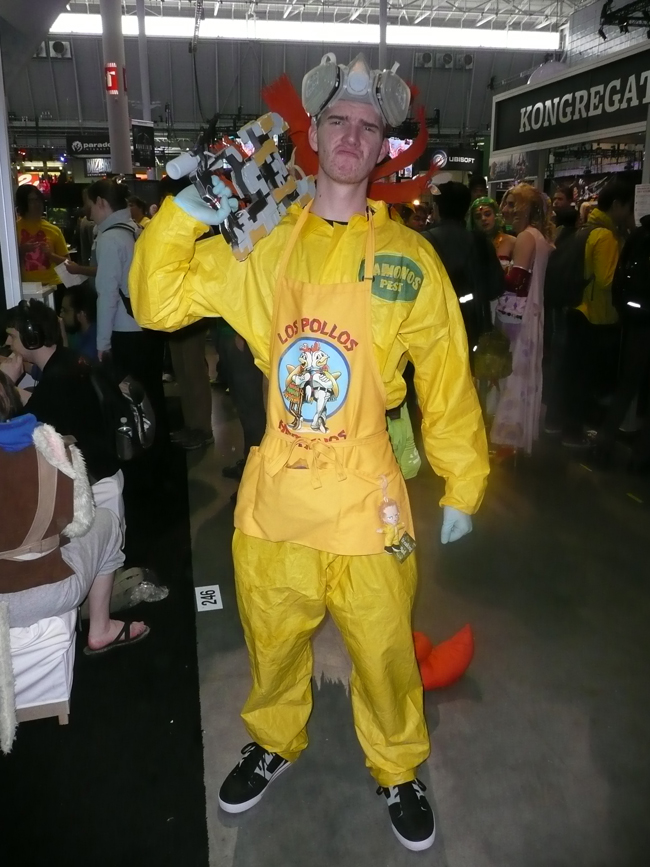 Here’s Patrick Jwanowski as, basically, season 4 and the first half of season 5 of Breaking Bad. Science, bitch! 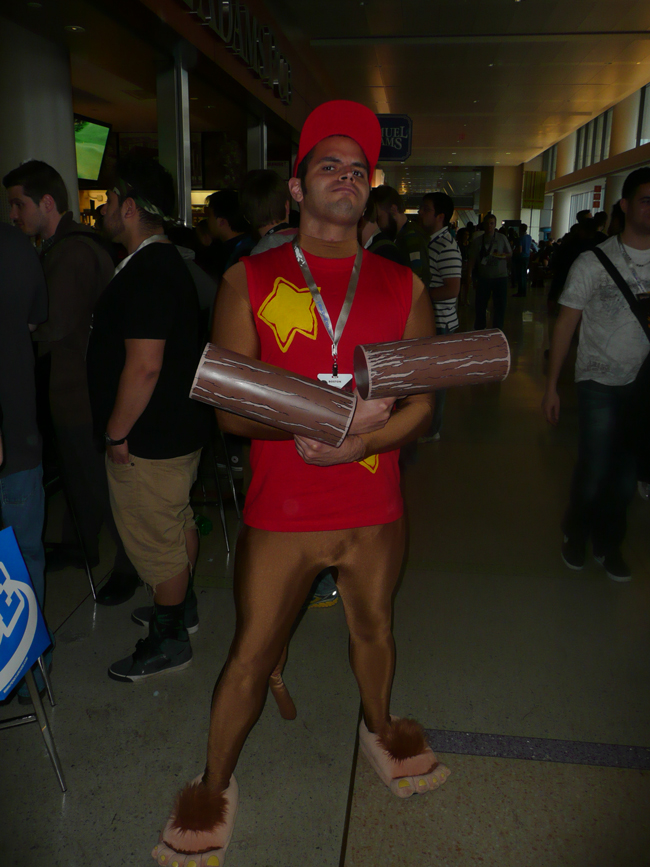 Let’s give a round of virtual applause for Ray Ortiz’s Diddy Kong costume that includes peanut guns. 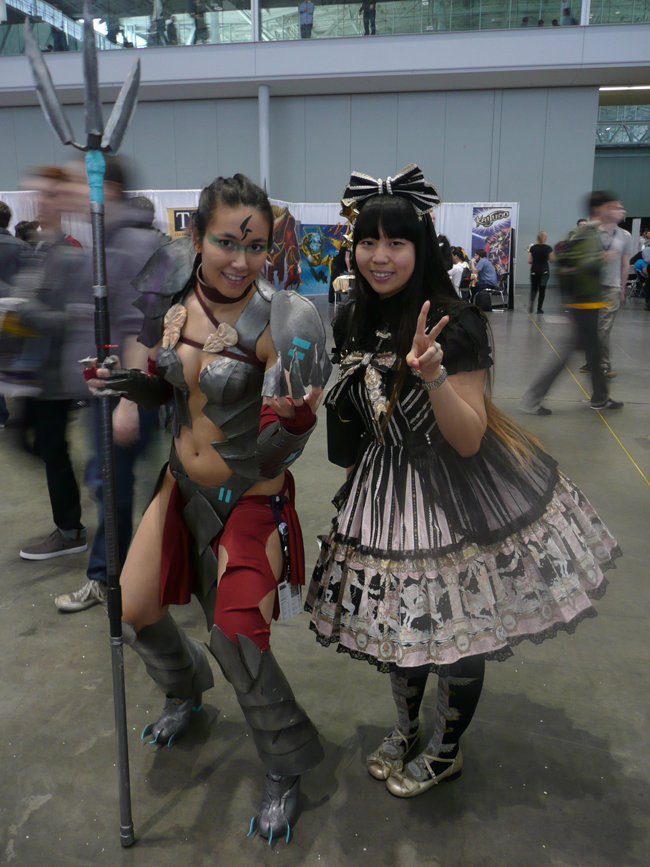 Here’s Mary Clippinger as Headhunter Nidalee, and Courtney Chong in what she called “Lolita fashion”. 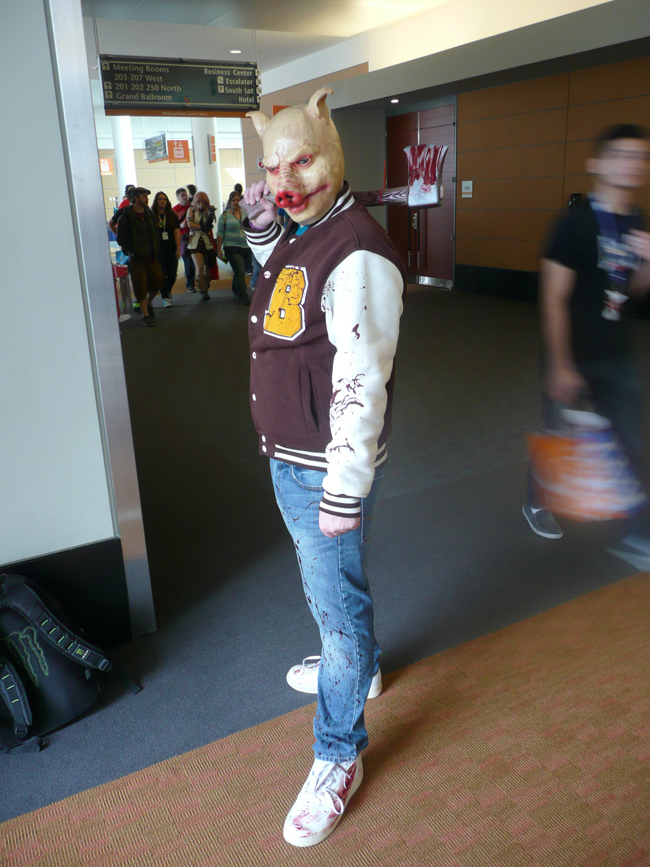 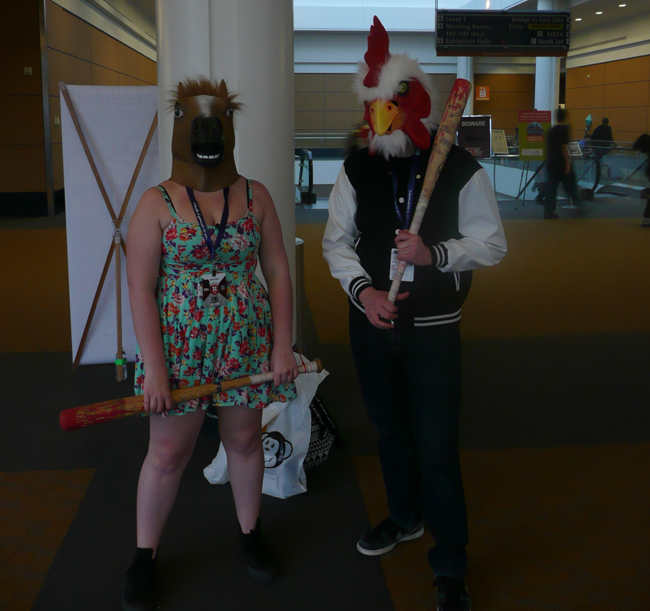 And even more Hotline Miami cosplay. Boston must be way better, weatherwise, for these kind of outfits. Maybe the next game should be Hotline Cambridge. 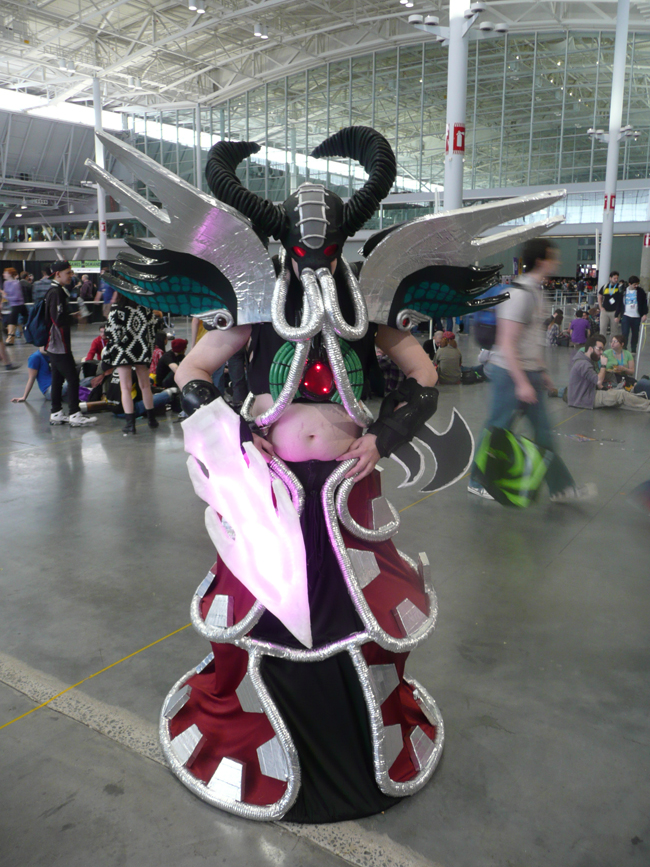 Will Coty as Kassadin from LOL. 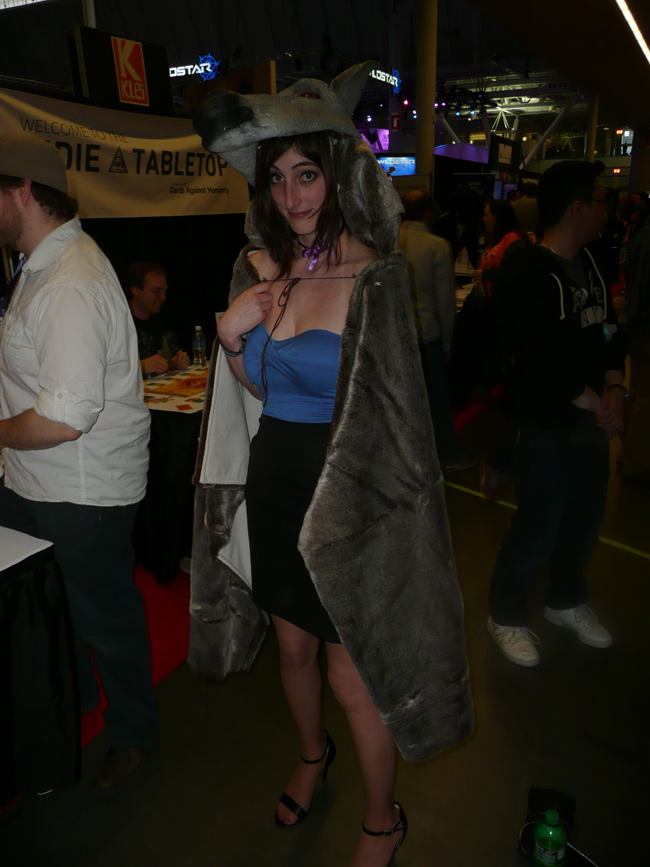 I’m a big fan of Stephanie Palermo’s take on Faith from The Wolf Among Us. Especially the donkey skin. 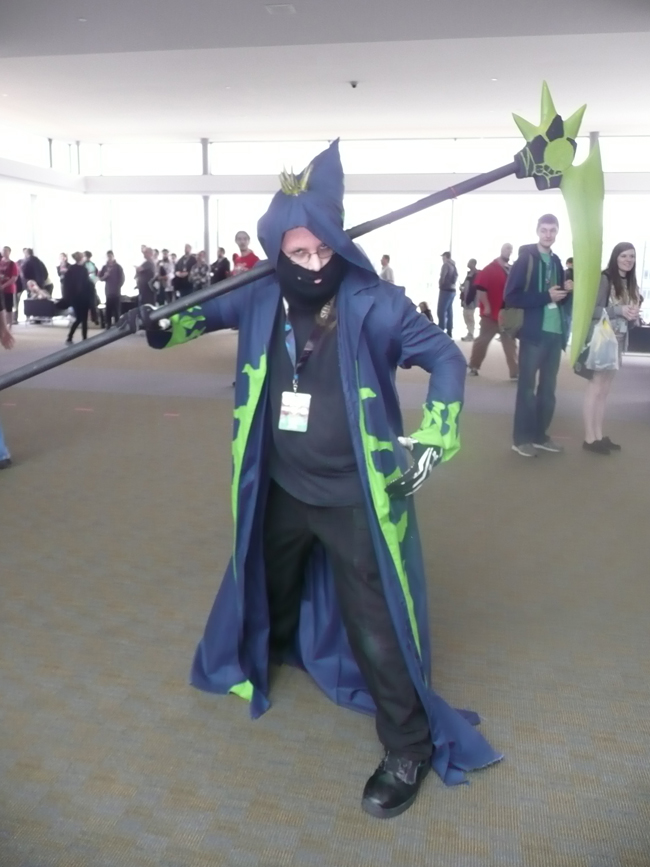 Tyler Sewell’s Grim Jr. from Grim Tales From Down Below. You’re welcome. 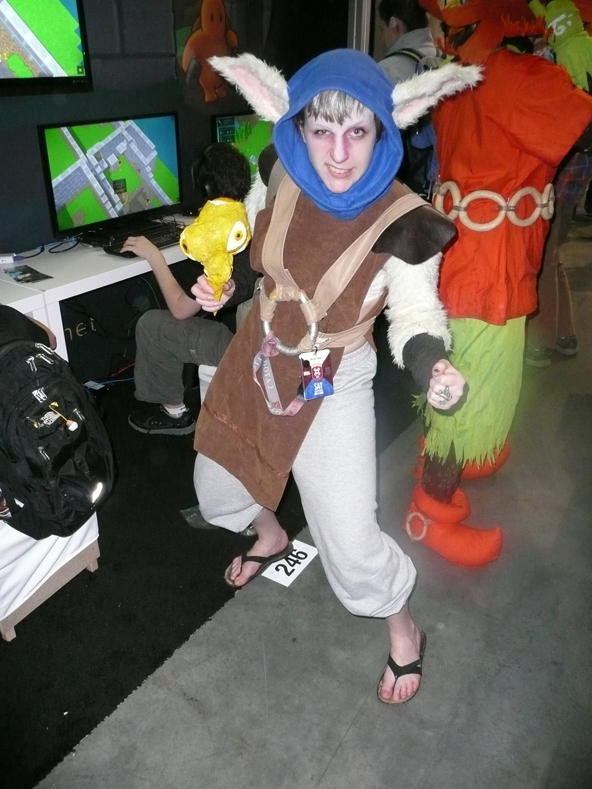 Ashley Mcelfresh as Meepo from DOTA 2. 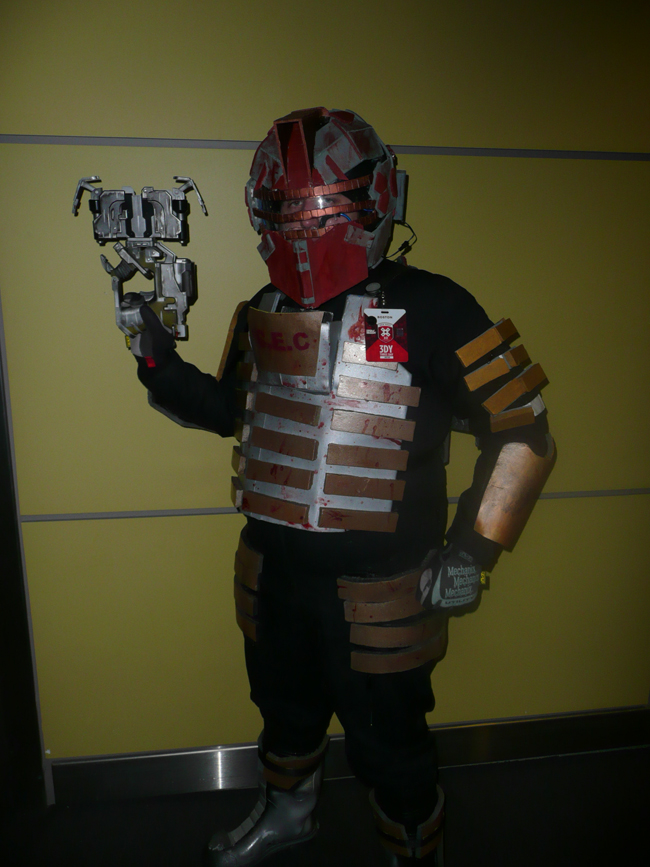 Shawn Connor’s Isaac Clark is kind of great, but I can’t help but be distracted by the fact that he failed to do Jake Bond, 007 cosplay. Maybe next year. 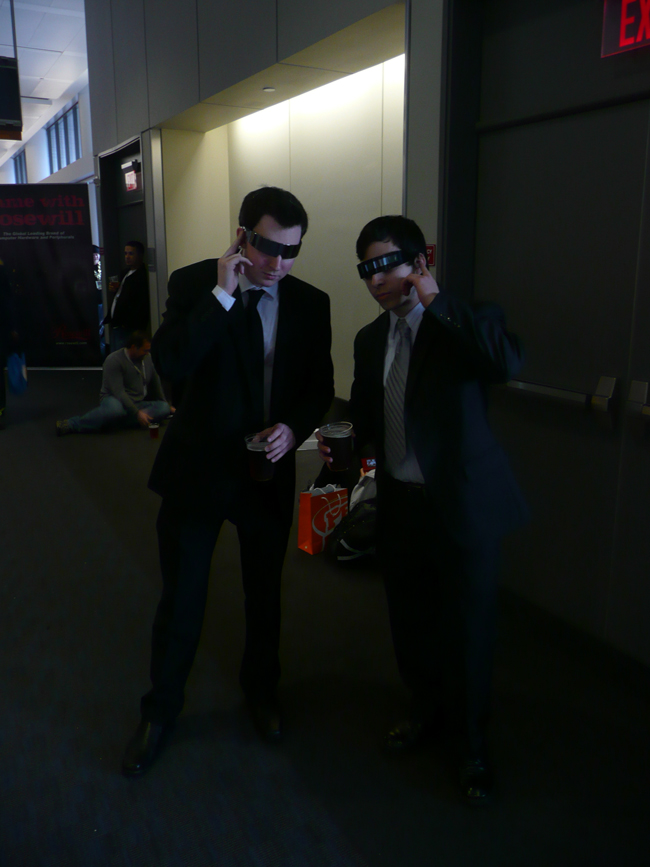 Not a clue who this is supposed to be, but I admire their vim. Comments, care to educate me? 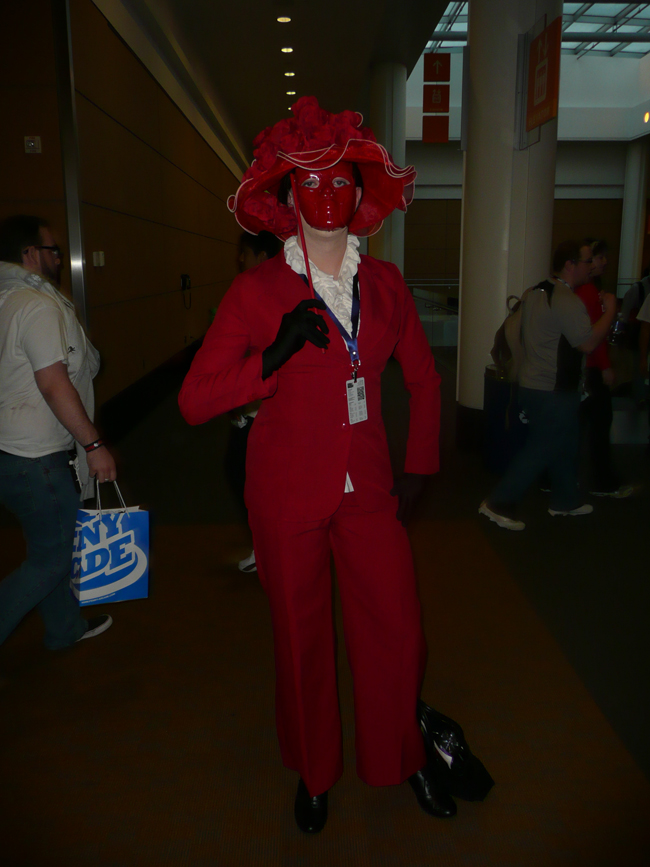 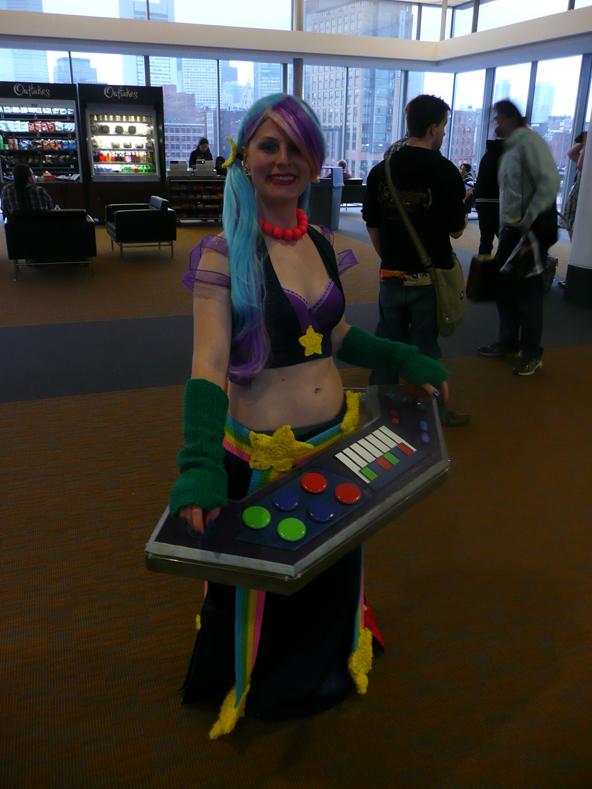 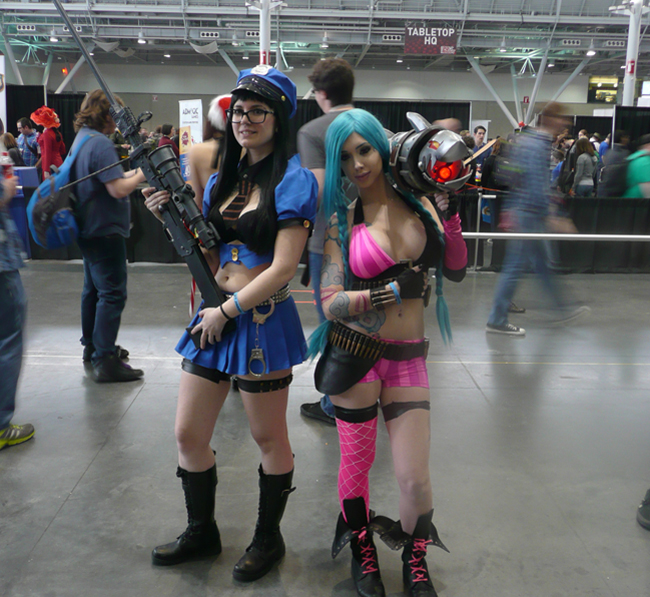 And are you shocked? Even more League of Legends, here’s Sarah Sinclair as Jinx and Jennifer Aflalo as Officer Caitlyn. 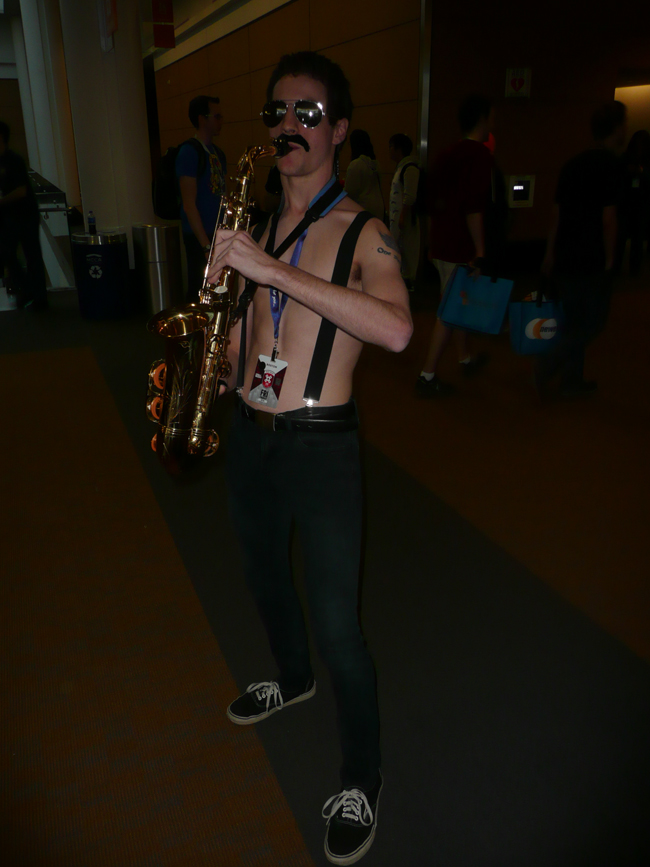 Here’s a pretty hilarious Sexy Saxman for your Sunday afternoon. 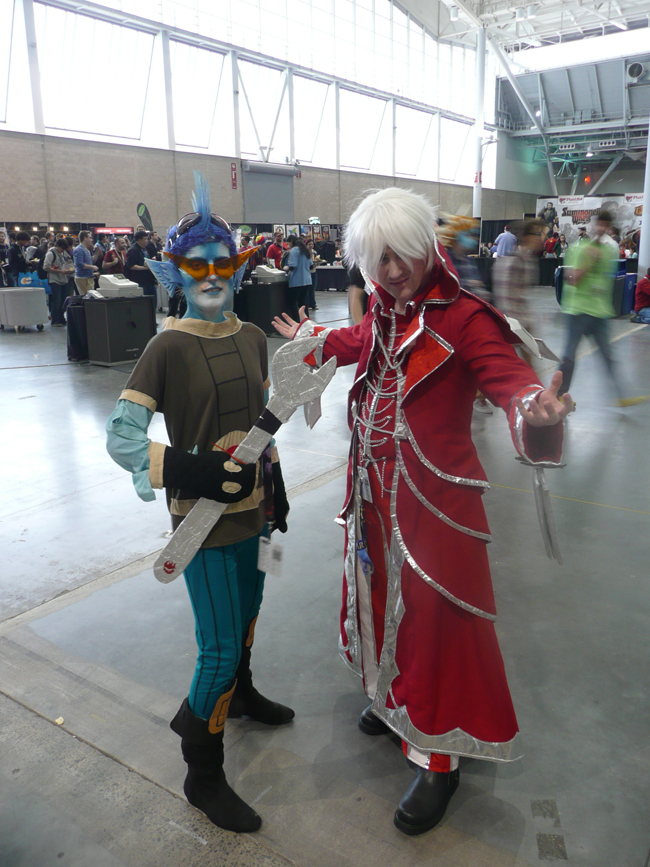 Here’s Brian McDonald as Vladimir and Sophie Forman as Rumble, from League of Legends. 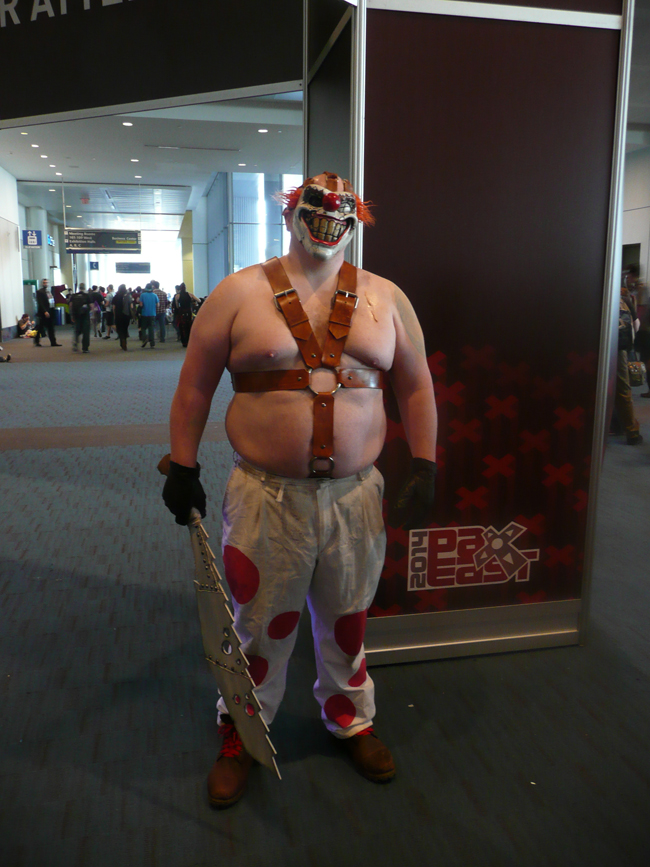 This Sweet Tooth from Twisted Metal is almost as creepy as you’d expect it to be in real life. 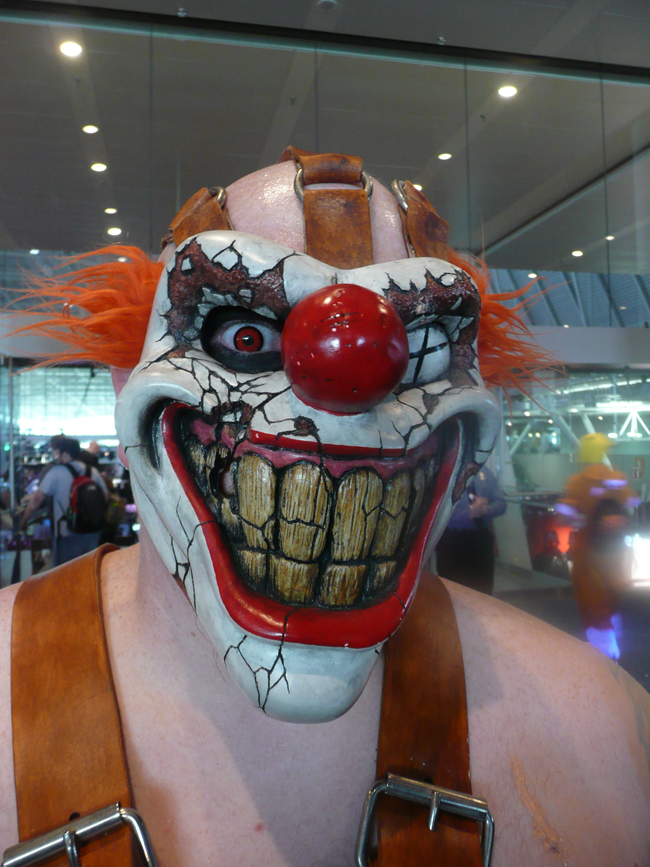 But then you realize it’s too awesome to be creepy. 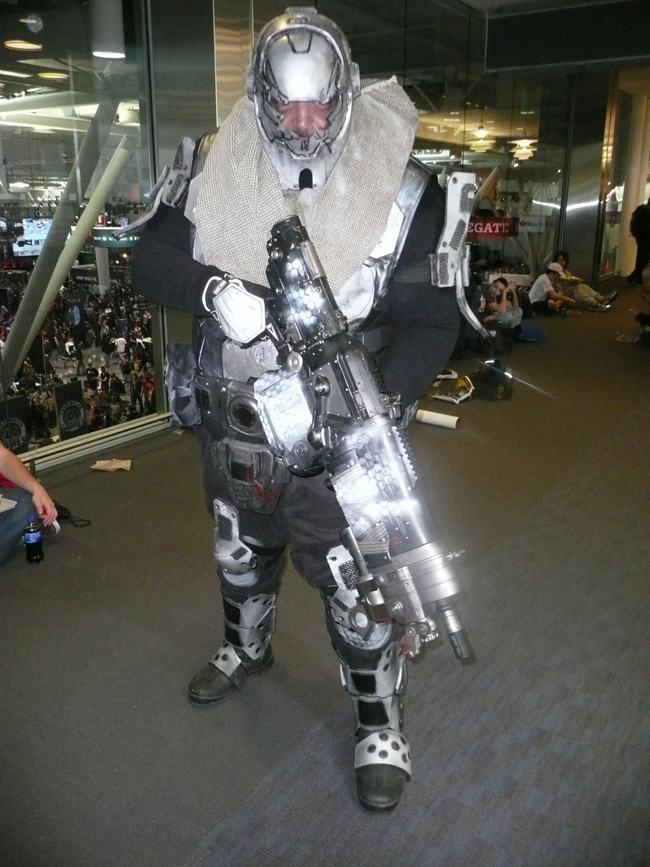 Here’s Thatgearsguy as an IMC Pilot from Titanfall. 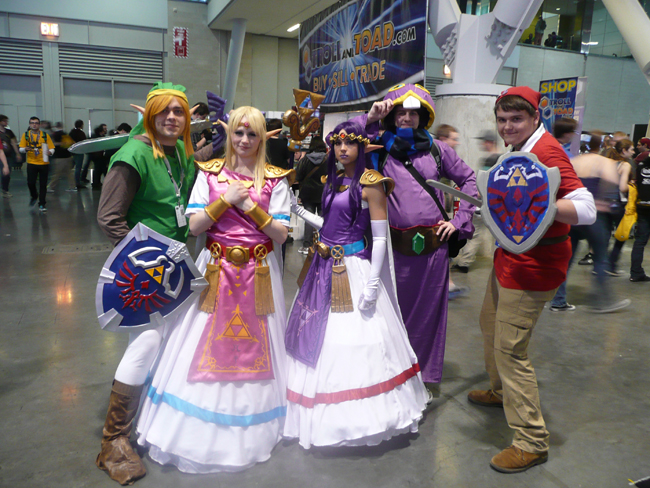 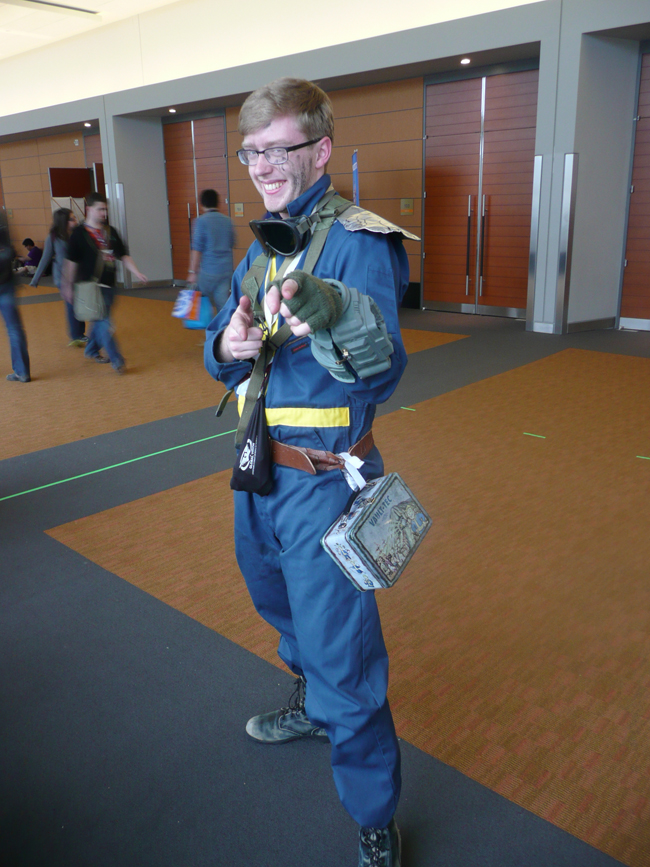 Chris Brown as a Vault 101 dweller from Fallout 3. By the way, hasn’t it been way too long since there was a Fallout game? AND HEY ISN’T FALLOUT 4 RUMORED TO TAKE PLACE IN BOSTON OMG META! SYNERGY! 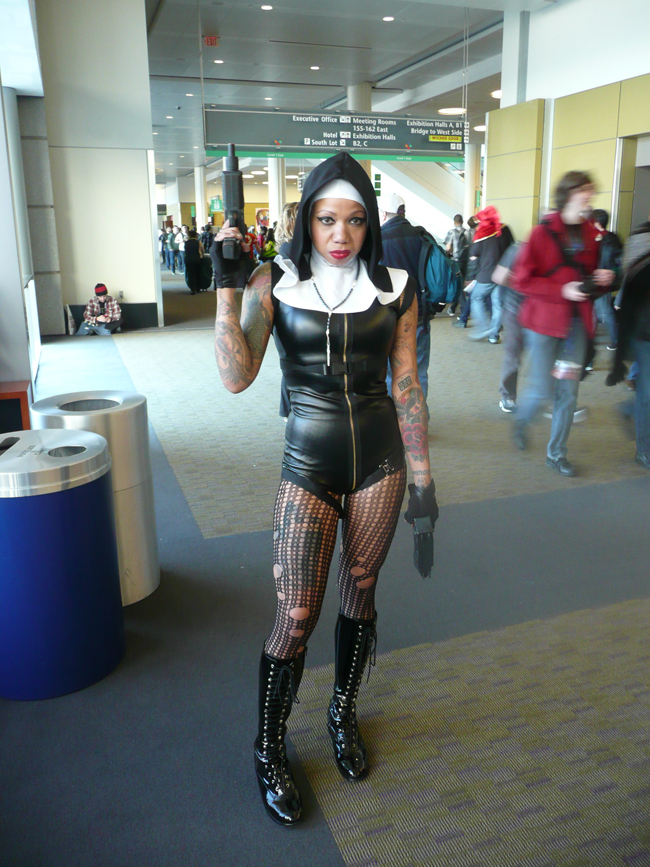 Here’s Val Monrose as a nun from the Hitman: Absolution trailer. 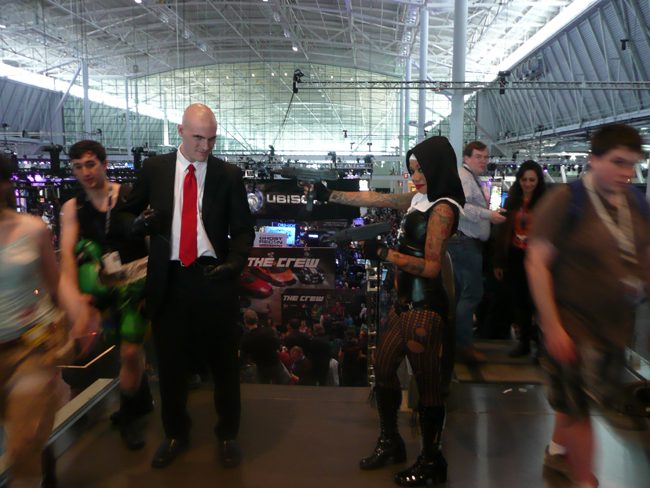 And here she is with Agent 47. 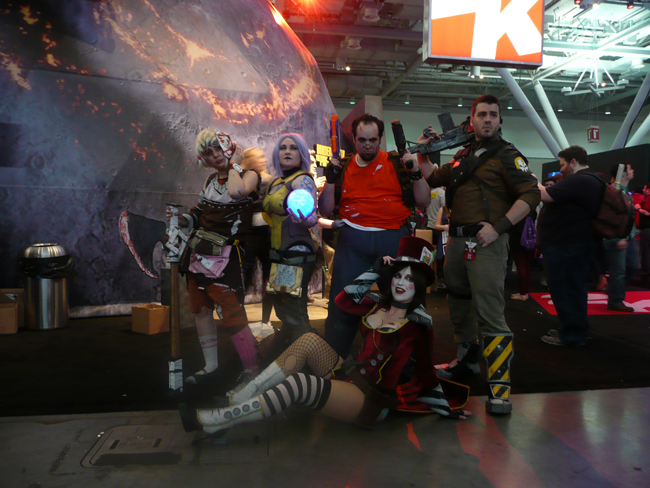