Anyone who has ever played an RPG has been there: You’re halfway through the game and you’ve already got enough cash to outright buy the kingdom, city, or planet where your adventure is taking place. Either that, or the people you’re saving are hateful, opportunistic jerks who, upon seeing you stagger back into town all scorched and smoldering from defeating the dragon that was menacing the town, will quadruple what they’re charging for burn salve. Every RPG economy seems to be bent or broken in some logic-defying ways, to the point where it doesn’t make sense, annoys the player, or it ruins the game balance.

But why? Can’t some bright game designer just, you know, buckle down and write a decent in-game economy? Is that so hard? KOTOR, Oblivion, Fallout, Diablo, are all fantastic games and I love them very snuggly kissy cuddly much, but they all suffer from a case of hilariously broken in-game economy. (Although each one is broken in a different way.)

Well, let’s look at the problem. Let’s assume we’ve got some game where you travel around and defeat bad guys and get better gear as you go. Perhaps some leveling up and side-questing, too.

* We want to allow the player to loot bad guys. It’s really frustrating at the beginning of the game if you have to fight a guy who is wearing fancy-pants armor and wielding a flaming sword while you’re still running around in a tunic and swinging a stick, only to have your vanquished foe and all of his gear fade into the dirt when he goes down. It makes the game feel unfair and arbitrary. If you defeat someone with a better weapon, you should get it.

* We want the player to be able to sell the gear they collect. Managing resources and collecting “treasure” is a big part of the appeal of these games, and leaving out the trading means leaving out the fun for a lot of players.

* We want the shopkeepers in the game to pay reasonable prices for gear. It really is obnoxious to be the hero of the realm and have an NPC offer me three copper for my unicorn horn and turn around and charge me ten gold for a bent, rusty butterknife. It makes the characters in the game seem selfish, greedy, and opportunistic, which is bad since we’re generally supposed to care about them and want to help them.

* We want shopkeepers to be able to do business with the player. Some games put a cap on how much value a shopkeeper can handle in a single transaction, or they give the shopkeeper a small pool of money which is replenished every few in-game days. These are intended to stop the player from unloading their entire haul in a single transaction, but it’s easy to exploit around these limits. If you want to sell all of your violently attained swag, you have to wait for their money to refill several times, or unload big-ticket items through a series of complicated trades. This limitation just encourages boring behavior. You must then choose between having fun and acting rationally as a character. 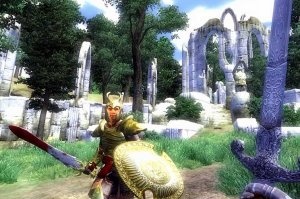 But if the player can loot foes, if the foes drop worthwhile items, if shopkeepers pay fair prices, and the shopkeepers have enough money, then the player will end up a tycoon about a half hour into the game. The problem all traces back to the conceit we all take for granted: Players can take on wave after wave of willing enemies. Never in history has there been a gunfighter or a swordfighter that regularly and single-handedly killed batches of foes with impunity. If there was, people would have stopped fighting them.

When the gameworld generates foes, it’s also generating gear for those foes, thus poofing into existence a huge haul of valuables for the player to obtain. No economy can remain stable if a single person can supply an endless stream of valuable goods from thin air. The player becomes a loot-generating machine. They are like the replicator machines in Star Trek, except they can’t stop producing stuff. (Unless they stop playing the game.)

There is no way to patch this economic perversion to have it make sense. Trying to make a simulated economy on top of this absurdity would be a waste of valuable programmer time, although it would lead to some humorous situations: For example: A longsword is a valuable tool. But as you sell more longswords and they get spread around the gameworld through trade, the prices for swords would, in a detailed simulation, fall drastically. Once everyone in the world and their grandmother has a sword for each hand and one for over the mantle, the world will no longer want any swords. Blacksmiths would stop making them. There’s no way they can compete with you, since you’re essentially a cost-free sword factory. The price of swords would then drop to the price of the raw materials they contain. People would buy your swords (and you would still sell them, since they cost you nothing to acquire) just to melt them down to make other stuff. At which point you would be putting miners out of business, since it’s way more expensive to prospect, dig, and smelt, than to just buy a wheelbarrow full of metal swords from the player character. In the end you end up with one single person driving the blacksmiths, cobblers, miners, and clothiers out of business.

The best solution for dealing with the oddball behavior of an in-game economy is to just ignore the silliness and enjoy the game. The worst thing you can do is waste time over-thinking it.

Shamus Young is the guy behind this website, this book, these three webcomics, and this program. He’s really looking forward to breaking the economy of Dragon Age when it comes out.