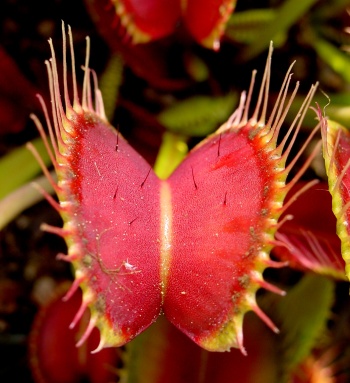 There are few plants considered quite as un-plant-like as the Venus flytrap. The swamp-bound predator from South Carolina eats bugs for nourishment, and is equipped with a decidedly beastly mouth to do the job. What’s more, when an unsuspecting fly lands on our friend’s “tongue,” the jaws of the trap snap shut, trapping the fly and, for lack of a better word, eating it.

Reflexes at the speed with which the flytrap clamps down is usually reserved for motile creatures – animals, things with brains (or brain-like assemblages), etc. That kind of action can’t be easy for a plant, so what makes it so successful in its peculiar niche?

Well, the answer may lie in basic arithmetic, as it turns out. New research suggests that Venus flytraps can count to five, and this is their greatest asset.

When a fly lands on a flytrap’s “tongue,” drawn there by the sweet scent and bright red color, it will inevitably brush against one of the plant’s trigger hairs. These are long, sensitive strands inside the mouth. Touching one sends a signal through the stem, not unlike how our own brain’s neurons work.

Just brushing one hair won’t make the fly into a meal, however – a flytrap must contend with all sorts of passing debris, and can’t go chomping down on any bit of dust that crosses its path. This is where the maths come in: that first signal sets off a “timer” for the trap, and should whatever’s in its mouth set off another hair before the time is up, that’s when things get scary.

So one tickle does nothing, but two closes the trap. A third touch starts the digestive ball rolling. Advice to a fly caught in a trap: don’t panic. Further movement only induces more horrors – if you don’t move, the flytrap will eventually open up again and you can go free.

It’s at four and five touches that your goose is truly cooked: four seals Dionaea muscipula‘s mouth hermetically shut, asphyxiating you before a fifth twitch pours in the highly acidic digestive juices. More movement, such as from larger prey, simply causes more juice to flow in. Digestion happens over a few days, putting the plant’s career on stage and screen on hiatus until it’s all done.

A dead fly, of course, isn’t setting off any more hair triggers. Yet-to-be-published research suggests that the bright red surface of the flytrap’s mouth has more in common with a tongue than we may be comfortable with: it literally tastes the chemicals present once digestion has started, only opening and discarding the remains when nothing edible is left.

While the details have been known for some time, the study is the first to document the counting that goes on.

I guess this leaves us with an interesting, philosophical question – what is a mind, if even a plant can do arithmetic as well as a two-year-old? What I’m asking is, as far as brains go, does this even count?