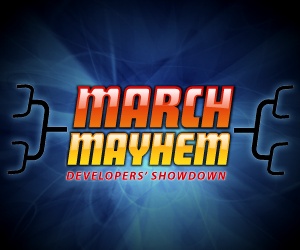 Sega vs. Nintendo. Blizzard vs. Take Two. EA vs. … anyone. We’ve all had conversations about which developer or juggernaut was “better,” offered more to gaming or just made the best games. Forums across the internet rage with these very debates, but they’re without form or direction; just a bunch of sound and fury with no end in sight.

We here at The Escapist have opted to take a more proactive approach to such burning questions, and are proud to introduce March Mayhem: Developers’ Showdown, the community-wide tournament to determine which developer gamers really love most.

The format is pretty simple, and given the time of year, is based on the NCAA men’s basketball tournament. But beyond that, it’s all about the videogames you know and love. We’re pitting developers in a head-to-head tournament in which you vote for the developer you like more.

Over the next couple weeks, we’ll be posting a number of games directly coinciding with the rounds of the NCAA tournament (the dates are listed at the top of each round) and asking you to pick the best developers from the pool. To participate, simply take a look at the brackets and vote right there for the developers you like best. (Note: You’ll need to register to post on our forums to vote.) Then, if you’re so inclined, you can hop right into a forum thread to plead your developer’s case.

Voting for the first round begins March 20. Update: Voting for the third round begins March 27. Each game lasts 24 hours and will begin between 9:00 a.m. and 12:00 p.m. EDT. From there, we’ll move the winning developers into the next bracket. There are 64 developers in four divisions, seeded 1-16. The No. 1 seed plays the No. 16 seed in its division; No. 2 plays No. 15, and so on. After each round, the pool is cut in half until there are only two developers left; whichever you choose from there becomes the 2008 March Mayhem: Developers’ Showdown champion, not selected by a bunch of talking heads or game journalists, but by you, real gamers.

We have, however, taken the liberty of seeding the tournament to get things up and running. From here on out, it’s up to you to determine which developer wins March Mayhem: Developers’ Showdown!