With less than two days to go in 2016, it’s time turn our thoughts to our favorite games of the year. The Escapist Awards 2016 will be coming tomorrow, with our Game of the Year announcement to follow on Sunday, January 1. But for today, we turn our attention the game that got the most votes in our recent poll of our readers. Yes, it’s time for the Reader’s Choice Game of the Year.

We presented our readers with a list of 2016 titles that was culled from our own Game of the Year voting. The vote was held over the last week, and we’re ready to reveal the results. 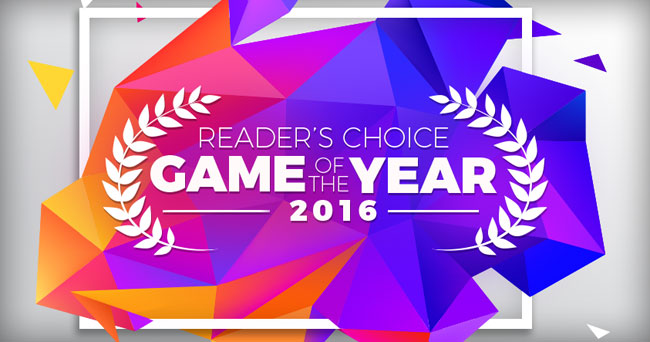 Developed by Naughty Dog and published by Sony Interactive Entertainment. Released on March 10, 2016. Available on PS4.

Our readers chose the swan of song of perennial Uncharted hero Nathan Drake as their favorite game of 2016. It may have been a PS4 exclusive, but it still came through with the win. Our Senior Editor Liz Finnegan described it in her review thusly:

“Uncharted 4 is a grand adventure: over the top yet, simultaneously, graciously restrained. It is a reflection on a grandiose life with an overcast of impermanence and a dignified maturity. A Thief’s End doesn’t settle for telling the final story of Nathan Drake, it also tells the human story of Nathan Drake, serving as a fitting, elegant farewell. “Immersive” is a word that is often used to describe well-executed games, yet never has it been more appropriate than for A Thief’s End. Never have I felt more respected as a player, as a fan, than I did during my time with Uncharted 4.“

She appears to agree with our readers, as she closed out her review by saying, “Let’s put it this way: If Uncharted 4: A Thief’s End was the only PlayStation 4 exclusive ever, I would purchase the system all over again in a heartbeat. I could not recommend a game more sincerely than I do this one.”

Developed by id Software and published by Bethesda. Released on May 13, 2016. Available on PC, PS4, and Xbox One.

Our 2016 Reader’s Choice Game of the Year Runner-Up is id Software’s Doom. It was narrowly beat out by Uncharted 4, but there’s no question that the Bethesda-published shooter captured the attention of plenty of gamers this year. Our Senior Editor Ron Whitaker reviewed the game when it came out in May. Here’s a bit of what he had to say:

“If you’re the sort of person that enjoys playing a shooter that lets you assess, plan, and then cautiously attack, Doom may not be for you. From the moment your character, the aptly named “Doomguy,” awakens on a stone slab surrounding by hellish imagery, Doom turns the speed up to 11 and never backs off. There’s no cover system, and no regenerating health. There’s just frantic gunfire and hordes of Hell’s minions to slay.

For those who played previous Doom titles in those dark days of yore, you’ll find much that feels familiar. That familiarity will give you some great moments throughout the game, when you see what the modern take on the enemies you remember looks like, or when you find an iconic weapon like the BFG 9000. You’ll likely also find that your fast-twitch shooter skills have atrophied a bit over the years, because there’s almost no game out there right now that embodies a pace this frenetic.”

The game excelled at single player, even if the multiplayer left a bit to be desired. Ron wrote,

“Doom pulls off something many people thought wasn’t possible in this day and age: A shooter with a long, involved single-player campaign that is better than the multiplayer in every way. It manages to hang onto the things that made the classic games great, and to graft a modern upgrade and progression system onto them without diminishing the experience. It’s a throwback to older days, with massive, intricate levels, tons of enemies, and a pace that never lets up. If you’re a fan of shooters, but want to play something with a classic feel, you absolutely cannot go wrong with Doom.”

Thanks to all who voted in this year’s poll, and thanks for reading The Escapist in 2016!