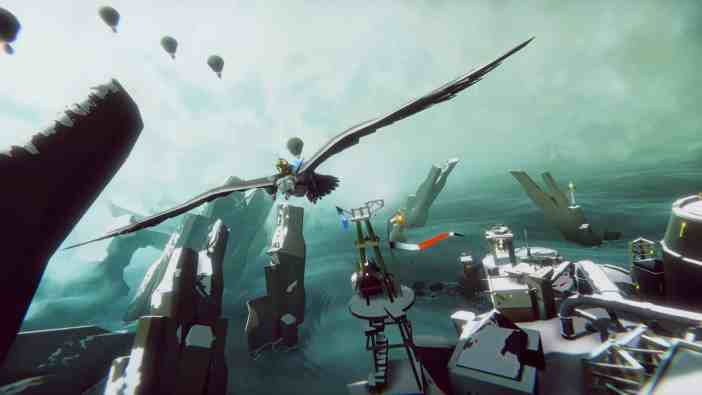 At first glance, The Falconeer does not look like it was made by a single developer. Yet Tomas Sala has created what many wouldn’t dare — an open-world dogfighting RPG big enough to warrant even a limited physical release. The question is — does it work? After a few hours with a preview build, I’m happy to say that, for the most part, The Falconeer is shaping up to be a beloved cult classic. It definitely has some room for improvement though.

Within seconds, The Falconeer captivates you with its gorgeous visual flair, opting for a low-fi but not low-poly aesthetic, with swaying, intermingling colors like a painting brought to life. If you loved the look of Okami back in the day, you’re in for a treat here. Islands aren’t simply chunky plops of land but towering spires, ancient temples, dry bones of great beasts, and makeshift human constructions, all spread across the Ursee. The audio design is equally superb, with soaring seas, torrential rains, humbling thunderclaps, and energy blasts from your falcon’s shock cannon all ringing through with gusto. Make no mistake — The Falconeer is a masterclass in world design.

Combat is also a blast. At times, the flight controls can get away from you, but you adjust quickly to The Falconeer’s unique blend of simulation and arcade sensibilities. Since you’re flying a bird instead of a plane, The Falconeer also seemingly takes notes from Batman: Arkham Knight’s glider system when it comes to gaining lift and maintaining speed. Instead of constantly spinning around enemies, you’ll have to dodge, dash, and dive regularly to keep an edge in a fight.

This is on top of commanding wingmen in certain missions and being able to target weak points on larger craft like airships and boats. I think my favorite choice though is how you acquire ammo by charging through lightning storms to amp up your shock cannon. Tropical storms give you a lifting boost to boot. It’s an incredibly flexible combat sandbox to play around with, harnessing the environment, movement system, and your arsenal to full effect.

Now if only the story presentation and voice-overs were half as good. While The Falconeer has a solid premise, it explains itself poorly, but I can’t discuss it in depth without spoiling a major story hook. The spoiler-free explanation is each chapter of the game lets you inhabit a new, customizable character. They have no audible dialogue, and your customization options are limited to a preset face type, gender, and class of falcon you’ll be riding, but you do have a fair selection of options. The most meaningful choice is your class, which comes with a unique backstory.

History is the story’s greatest strength and weakness. Its world feels as though it’s existed long before our time with it and will go on for many eras to come, but it also likes to remind you of that by dumping massive amounts of often fully voiced exposition. While you can skip most of it, the context is often important to world-building, so you’re caught between a rock and a hard place. 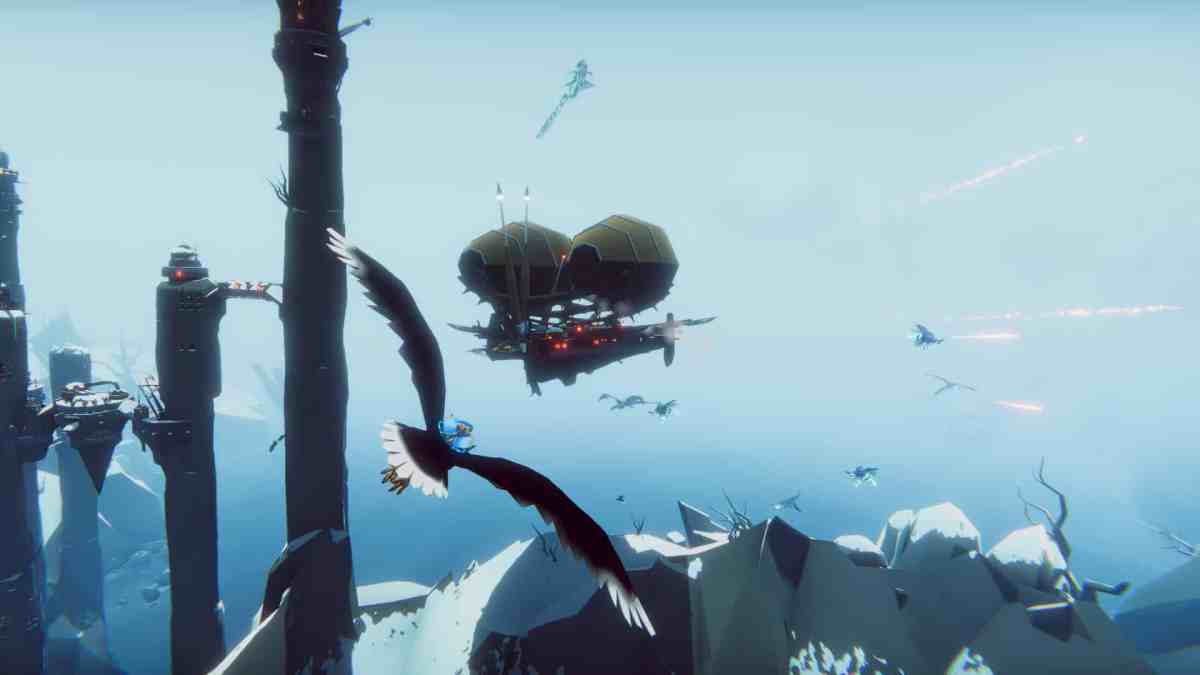 Unfortunately, the first few missions come front-loaded with a lot more of this pace-harming exposition than exciting aerial duels. You do get to them eventually, and once you do it comes together. However, you have to stomach a lot of ambiguity and, somehow, too much explaining, all at the same time, often conveyed with wildly varying voice acting. Where a shaman might convey mystery with every word she speaks, an early mercenary associate left me wanting a mute button.

However, I’m glad there is so much spoken dialogue, as oddly The Falconeer has an incredibly small font and menu icons. It’s like everything was scaled for a game played at 480i resolution, making the in-game slider to increase the scale of HUD elements ill-equipped to counterbalance this. The non-text-based elements do a serviceable job, and I love the Falcon health and dash meter UI looking like extended wings cast in a magical glow. But any time text comes into the picture, I was squinting at a screen I was less than three feet away from. If nothing else, I sincerely hope Sala takes the time to increase the scale of these elements. 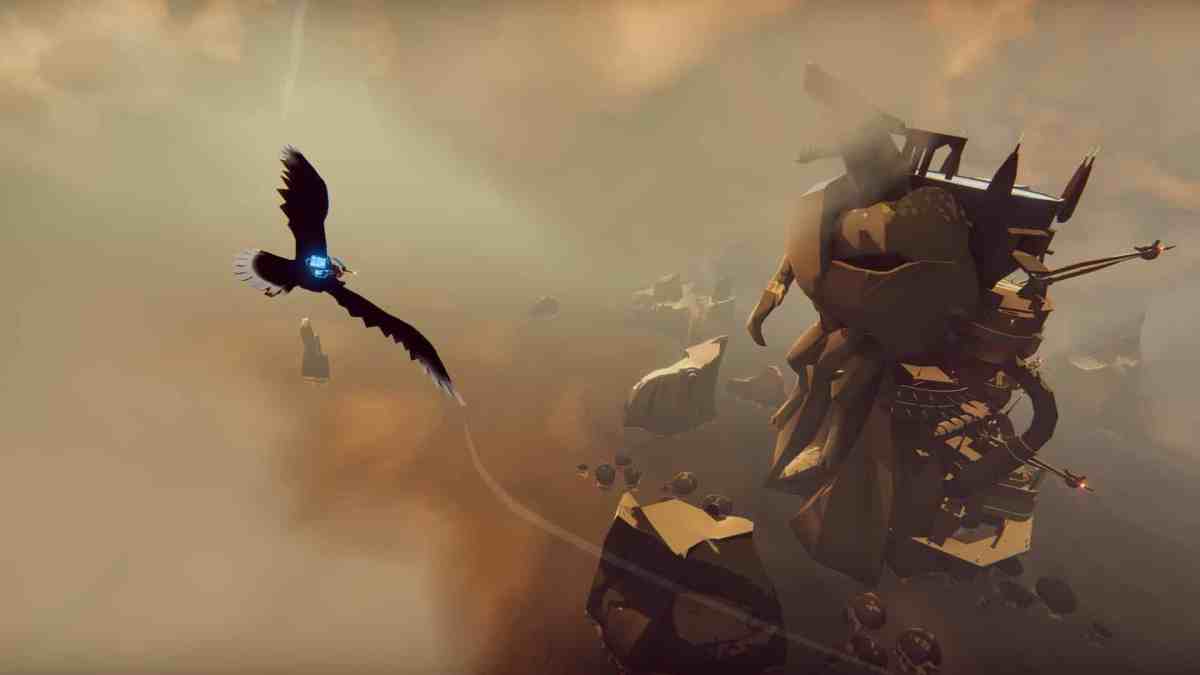 It should also be noted that while there is the option to play with keyboard and mouse on PC, a controller is the optimal route. This is a game that begs to be controlled with subtle tilting of the analog stick, drifting over the air currents, before twisting and turning organically in the heat of battle. Remarkably, there are a ton of rebinding options, so if you use alternative controllers or such, you should be good to go there.

Ultimately, The Falconeer does far more right than it does poorly. Despite a rough start, I’ve no doubt fans of flight games will find something to dig their claws into as a Falconeer. As passion projects go, The Falconeer is a beautiful piece of work to see in motion. When you get away from the exposition procession and just fly, it’s hard to not settle back in your chair and see where your falcon will take you. With mysteries to uncover across several stories, The Falconeer is absolutely one to keep on your radar.