What should the final conflict of a game be like? Should it be the most dramatic moment of the game, or the biggest challenge?

Way back in the primordial soup of coin-operated videogames, people played for the challenge alone. The games ran on and on endlessly, until you lost. Somewhere along the way, someone got it in their head to make the game more compelling and less abstract by adding a story arc that could be completed. This is a great idea except that dramatic stories require careful pacing, which is usually wrecked when the player does something that doesn’t fit the story. Like getting killed.

There are as many reasons for gaming as there are gamers. But if you’ll allow me to divide everyone into a couple of arbitrary groups then I’ll say there are people looking for some kind of heroic experience, and others are here purely for the mechanical challenge. And since dividing people into groups and labeling them is what you do on the internet, let’s call them heroic players and skilled players. Yes, this is an excellent set of labels that everyone will accept and which won’t instantly ignite an epic thread of nitpickery that leads to a full-blown flamewar. Also: I own a unicorn.

People looking for a heroic experience want to take part in some kind of story. They want to be the action hero and mow down the bad guys, do the big stunts, and engage in memorable heroic-type stuff. They want drama, excitement, and spectacle. And sometimes tits. On the other hand, skilled players want a game to challenge them personally, to test their strategy, their memory, and their reflexes as they do whatever it is you’re supposed to do in this particular game. (Which probably involves shooting Nazis and/or space aliens.) They want the game designer to erect a smooth, high wall in their path, and then they want to defeat the challenge (and the game designer by proxy) through the cultivation of their own abilities.

A careful game designer can balance the experience to please both types of players right up until the climactic battle at the end, when he has to choose one type of player over the other. This final battle needs to be the moment of highest drama, or it needs to be the culmination of all the skills and challenges the player has faced up until this point. Suddenly the designer has to decide if he’s ultimately building a reflex test or telling a story, because he can no longer do both at the same time. It can’t be both because making the “ultimate challenge” implies something that is hard, which implies that it will take some practice, which implies bringing the narrative to an abrupt halt while the bad guy takes the player to school. The designer can wreck the drama with player death, or he can let the player walk right over the bad guy without much fuss. 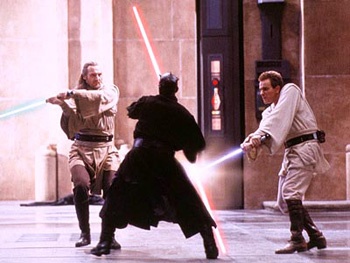 Games usually take the challenge route, and heroic-minded players are miffed when their avatar is promptly turned over the knee of the bad guy and spanked. It was pretty exciting watching Obi-Wan Kenobi bisect Dath Maul in the name of Peace, Justice, and Awesome at the end of Phantom Menace. It would have been slightly less impressive if Kenobi had been repeatedly carved up like an anime fansub on YouTube and kept re-living the battle until he stopped sucking so bad. When he at last squeaked by and emerged from the battle with all his limbs, it would feel less like he was a hero and more like he cheated Maul out of a fair fight by using his ability to reload the game. When the heroic player does finally hammer their way through, the story has lost its momentum. They don’t think, “At last, I beat the bad guy!” They think, “The bad guy beat me fifteen times and I finally beat him once.” This does not feel like victory. The story is mangled in the service of gameplay.

Once in a while, game designers lean the other direction and favor heroics over skill. The player gets to dispatch their nemesis in a showy but not-particularly-difficult final battle. This leaves the skilled players feeling left out. That’s it? That was the big bad guy? He was a pushover! The player has spent all this time honing their skills, and in the end their talents go to waste because the game designer is more interested in his story arc than creating the full and final test of player skill and dedication.

There’s no good solution to the problem, although the most basic and obvious practice of offering variable difficulty levels is a good idea that seems to be falling out of favor as designers try to shoehorn all gamers into one group or the other.

A popular approach is to use a bit of sleight-of-hand to make the final battle feel more intense without actually cranking up the difficulty. Half-Life 2 did a good job of creating the impression that the player was just moments away from being vaporized as they scrambled to tear apart Breen’s teleporter. (And if you needed a spoiler warning on that, then you’re the one who should be ashamed, not me.) Likewise, the most recent Prince of Persia introduced a different camera and lighting for the final sequence, making the player aware of how tiny they were compared to their foe. The ending wasn’t any harder than what had come before, it was simply more dramatic. It was the same platforming, but it created the impression that death was nipping at the player’s heels the entire time.

Final Fantasy has cultivated an interesting approach to the problem, which is to offload the “ultimate challenge” bit into optional sidequests. This lets heroic types trounce the final boss without too many mood-wrecking trips to the game over screen, and it lets skilled players face the Preposterously Difficult fight they crave.

Look back on the endings of popular games that disappointed you. Odds are that the ending was crafted with the other type of player in mind.

Incidentally, which kind are you?

Shamus Young is the author of Twenty Sided, the vandal behind Stolen Pixels, and is totally a heroic-minded player.