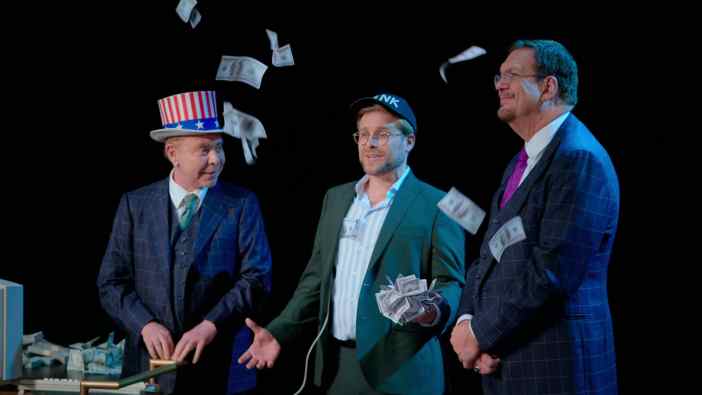 Evidently, it’s time to ruin the government as Adam Ruins Everything is now taking on… wait, sorry, my mistake. Adam Conover has a new show that is technically not Adam Ruins Everything and is something completely different (but actually the same) called The G Word with Adam Conover. The new series is coming to Netflix and will be a comedic documentary look at how the U.S. government works… or doesn’t. The streamer just dropped the first The G Word with Adam Conover trailer.

Conover has a fantastic way of explaining complex issues with a comedic twist, and it looks like he’s bringing that to this series as well but with a bit more documentary-ness to it all. The show, which is based on the book The Fifth Risk: Undoing Democracy by Michael Lewis, sees Conover traveling across America to see how government impacts our lives every day, for better or worse and in strange and unusual ways.

The G Word will feature a different subject in each episode, including ones on food, weather, money, the future, disease, and “change.” That last episode will feature Barack Obama, who also acts as a producer on the series, as Conover visits him to discuss whether we can fix the myriad of issues he uncovers throughout the series. More importantly, though, Penn and Teller show up and do some magic at some point during the series.

The show will be brief, clocking in at six 30-minute episodes. That hardly seems like enough time to unpack everything, but we’ll see how it goes. The show is written by Adam Conover, Biniam Bizuneh, Jonathan Braylock, Brian Frange, and Hallie Haglund. The series is produced by Barack and Michelle Obama, Tonia Davis, Adam Conover, Jon Cohen, Jon Wolf, Michael Lewis, and Hallie Haglund.

The G Word with Adam Conover premieres on Netflix on May 19, 2022. Earlier today, Netflix also offered a first look of Sonic Prime.