He’d won. Everyone else was dead, especially his friends. Now cop-turned-vigilante Max Payne stood on the edge of an abyss, listening to the sirens coming for him and waiting for the end of the world. But this was just the beginning… for him, a fledgling developer, and their groundbreaking, bullet-rich quest for vengeance. 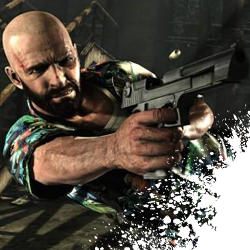 Miller went with the shooter, but he wanted changes before he threw any weight behind it. A decade in the industry had given Miller very specific ideas on how to build a marketable game.

He insisted Dark Justice go full 3D just like the biggest release of the day, Tomb Raider,… only with a decent camera. Not a problem for Remedy; they’d made the bulk of their capital on landmark 3D-graphics-benchmarking software. It also needed a hook no other game could claim. The team drew one from action-film director John Woo’s trademark slow-mo shootouts. Most importantly, the name “Dark Justice” had to go. Miller wanted everything built around a strong lead character with an iconic name that doubled as the game’s title, a la Duke Nukem.

That one proved a little tricky. Miller threw out Max, but nobody knew what Max’s last name was. Eventually, for lack of anything better, they went with Max Heat and spent $20,000 securing the worldwide trademarks on it.

Then someone from Remedy suggested “Payne” as an alternative. Max Heat and his expensive trademarks went straight into the trash.

Max Payne got the green light in 1997. Miller provided funding and guidance, and would publish under Apogee’s 3D Realms and Gathering of Developers imprints. A team of designers scouted seedy Manhattan locations escorted by a pair of ex-NYPD bodyguards while, back in Finland, Project Lead and Remedy co-founder Petri Järvilehto turned to his old buddy to write the story:… the same guy he’d brought in to help script Death Rally.

Sami Järvi — better known by his professional name, Sam Lake — brought big ideas to the table. He started with Max as the typical Chandleresque hard-boiled detective, then systematically destroyed him. Hunted by his fellow cops, haunted by his murdered wife and daughter, Max’s most violent and self-destructive impulses kicked in. Lake wanted players to experience that implosion first-hand, peppering the game with Max’s staccato narration (provided by New York actor James McCaffrey) and nightmare sequences set deep inside the character’s own psychosis. For good measure, he set Max’s blind hunt for revenge against an apocalyptic winter storm — a none-to-subtle reference to Ragnarok, the mythical end-of-the-world battle between gods and one of many nods to Norse mythology. 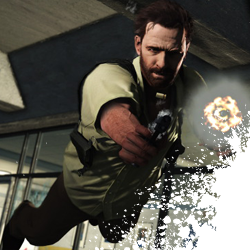 Lake also suggested using comic strips instead of fully animated cut-scenes, both for artistic purposes and to save resources. The team could implement story changes in days, rather than weeks or months. Unfortunately, the budget didn’t stretch far enough to cover so many actors. Remedy’s employees, their friends, relatives, even loose acquaintances became the game’s cast of mobsters, cops, and assassins, with Lake himself drafted to model Max.

To Lake’s surprise, the art team also wrapped his face on Max’s in-game model, complete with a grimace that inspired more satire, ridicule, and homage than any other facial expression in gaming history.

Everything clicked into place. They had the right name, the right hook, the right game. But nobody, not even Scott Miller, gave them a hard deadline.

A Cold Day in Hell

Max Payne‘s debut trailer landed at E3 in 1998. The high-impact action and stunning particle effects sold attendees on its potential, but Max’s ability to enter a super-slow-motion state to gun down multiple enemies in style sealed the deal. A target release set for summer 1999 felt too far away … and then Remedy failed to keep the appointment.

Instead, sci-fi smash The Matrix took over both the summer box office and pop culture with its own surreal “bullet time” slo-mo combat. Max’s hook wasn’t original any more, but amazingly, no other games picked the effect up. Järvilehto tapped into The Matrix‘s success, appropriating the “bullet time” phrase and even throwing a few callbacks to the film into the game as part of a graphics update that ate up most of 2000, causing themRemedy to miss a second release date. Dropping a planned multiplayer mode didn’t speed things up enough.

One thing did. Nobody at Apogee or Remedy had experience porting to consoles, so they contracted the job out to a relative unknown: Rockstar Games. Nobody knew at the time that Rockstar’s parent company, Take-Two Interactive, was in acquisition mode.

Take-Two didn’t need any more incentive. They moved in and bought out the rights to Max Payne for $10 million in cash and nearly a million shares of Take-Two stock. Remedy had already begun work on a sequel. 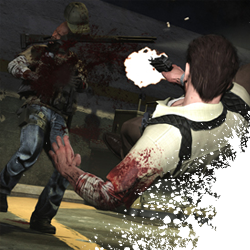 Fortunately, Max’s new owners/publishers took a largely hands-off approach. Sam Lake also took a step back, declining to reprise his own character. This time, the budget stretched to hiring professional actors; Timothy Gibbs stepped in as the new body model while McCaffrey returned to supply Max’s voice. The bigger questions centered around what to do to Max now, after he single-handedly annihilated an entire criminal empire. Lake finally hit on a classic noir answer: Bbring back the femme fatal.

She turned out to be Mona Sax, a hired killer who just couldn’t pull the trigger on Max. A fairly minor character in the first Payne, Lake put her front and center in his “film noir love story” to re-destroy Max’s stabilized life in the NYPD. Both had unfinished business with the Inner Circle, a shadowy organization at the heart of the first game’s conspiracies… — and with each other. When the designers handed a few levels over to Mona, Lake framed them as Max picturing what she’d done in his absence to keep players firmly planted in his anti-hero’s head.

Lake delivered a 600-page script, roughly five times what he’d done for Max’s first rampage. The design team placed an even greater emphasis on bullet-time carnage and built tools to make Max Payne 2 a modder’s paradise. They even snuck in an unusual treat for players who completed the game on the highest difficulty setting: a happy ending.

Max Payne 2: The Fall of Max Payne arrived in October 2003, just 27 months after the first. The general consensus pronounced it a cleaner, better-looking thrill ride, improved on all fronts, through still lacking a multiplayer mode. But for whatever reason, the game stalled, selling less than half what its predecessor did. Another company might’ve counted over 3 million in sales as a win, but Take-Two’s fiscal year turned ugly across the board. Delayed games, bad debts, and a threatened SEC investigation into alleged accounting violations added up to a disastrous 2004, and Max 2‘s “disappointing” sales failed to provide a rescue.

Fair or not, Max became the fall guy. This time for real.

A Bit Closer to Heaven

Remedy moved on to a new 5-year project, taking Scott Miller’s lessons forward into Alan Wake, an action-horror game featuring another James McCaffrey narration, a Sam Lake cameo (where he recreated the famed grimace), and plenty of Payne-ful easter eggs. Meanwhile, Miller’s 3D Realms bogged down in the legendary 14-year development of Duke Nukem Forever. In 2009, Take-Two sued him for failing to deliver the game; both parties settled with prejudice the following year.

Finally, in early 2009, Rockstar finally made it official, announcing Max Payne 3 from their Vancouver studio for a winter release. In keeping with tradition, that didn’t happen. The sequel went back under wraps as three more release dates slipped by. Screens of a bald, portly Max raised even more concerns … until the first trailer hit in the back half of 2011. It led off with the now-iconic, melancholy cello riff and James McCaffrey’s tired growl before exploding into a symphony of bullet-timed violence. Max was back. 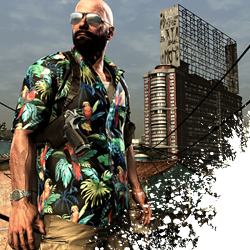 His new decent into hell reflects the eight-year gap between games. Burnt out, self-destructive as ever, and now an ex-cop, Max takes on a private security job in famously rich and dangerous São Paulo, Brazil. But when he once again fails to protect a woman in his charge, Max unleashes another scorched-Earth campaign to put things right.

Leaving New York behind isn’t the only big change, either. For the first time, McCaffrey also stepped into the motion-capture suit, providing the body model for a character he’s personified for years. At long last, multiplayer makes it into the feature set, complete with line-of-sight bullet time combat. And of course, the entire design team changed, without anyone from Remedy involved in their old creation. Sam Lake, however, fully endorsed the final product.

It took an enthusiastic group of Finns to nail that uniquely American mix of modern action and classic noir, but even they underestimated Max’s enduring appeal. He is the man pushed too far, the doomed anti-hero who keeps fighting, the lone cop betrayed but never broken, always sardonic, never bleak. Max’s constant struggle feels timeless, and the relentless gunfights never get old.