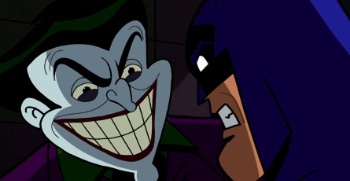 For fans of science-fiction and comic books, staying home on a Friday night has finally become an acceptable practice. With amazing shows such as Dollhouse and Battlestar Galactica, along with cartoons like Wolverine and the X-Men and Star Wars: The Clone Wars, there’s so much nerdy goodness occurring on Friday nights that its a wonder that DVR’s the world over can keep up. Leading the pack for Cartoon Network’s line-up is Batman: The Brave and the Bold, which has the masked avenger teaming up with popular DC heroes to fight crime, solve mysteries and offer up a moral lesson at the end of every half-hour. It’s a different, decidedly lighter take on the son of Gotham, but it’s still the goddamn Batman, which makes it great.

While Batman has taken on the likes of Gentlemen Ghost, Baby Face and the Black Manta, his most revered nemesis has yet to make an appearance: The Joker. Considering the boost in Mr. J’s popularity due to the success of The Dark Knight, it seems almost overdue for The Joker to make his grand entrance.

On this weeks special two-part episode, parallel worlds cross over as Batman swaps places with his criminal counterpart, Owlman. When Batman returns, he finds himself being hunted by a team consisting of Green Lantern, Aquaman and the Blue Beetle, leaving his only option to bring the Owlman down is to team up with none other than the Joker. Jiminy jillickers Batman!

Newsarama has clips of the episode, along with voice cast that reveals Jeff Bennett behind the Joker, as opposed to series favorite Mark Hamill. The idea of someone else taking up the Joker in an animated series may sound like heresy, but the series has been great thus far so I’m willing to give it a shot. Batman: The Brave and the Bold airs Friday night at 8PM on Cartoon Network.