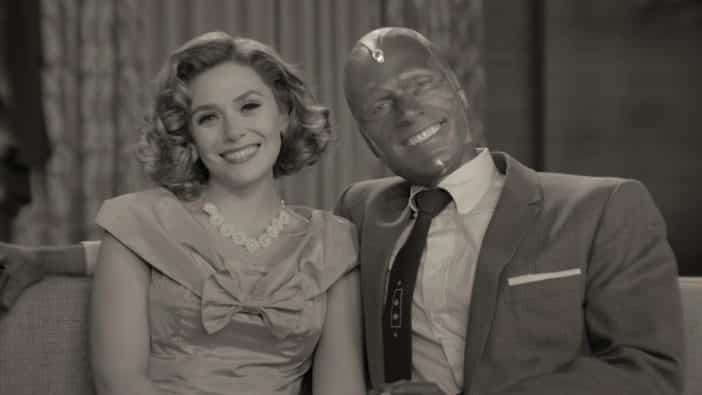 Things are getting back on track in the Marvel Cinematic Universe (MCU) as Disney has released its first full trailer for one of its Disney+ MCU series. WandaVision will be the first of the series to premiere, though it was originally supposed to land after The Falcon and the Winter Soldier, and this first trailer shows off just how weird it’s going to get.

If you recall, Paul Bettany’s Vision didn’t make it through the Endgame saga and even Iron Man’s snap didn’t bring him back, so the series has some major questions hanging over it. Obviously, Scarlet Witch (Elizabeth Olsen) and Vision are stuck in some sort of weird world where they’re tripping through the entire history of television sitcoms, but the why and how are completely unknown.

The official synopsis doesn’t give much more information:

Starring Elizabeth Olsen and Paul Bettany, “WandaVision” marks the first series from Marvel Studios streaming exclusively on Disney+. The series is a blend of classic television and the Marvel Cinematic Universe in which Wanda Maximoff and Vision—two super-powered beings living idealized suburban lives—begin to suspect that everything is not as it seems.

One thing that is great is the plethora of sitcom cameos sprinkled throughout the trailer. There’s a host of actors in this trailer that have taken part in a plethora of sitcoms, including Debra Jo Rupp, best known as Kitty Forman from That ’70s Show. There’s also a host of returning characters outside of Scarlet Witch and Vision. Kat Dennings’ character from Thor is making her triumphant return alongside Teyonah Parris playing a grown-up Monica Rambeau from Captain Marvel. There’s also Randall Park returning as FBI Jimmy Woo from the Ant-Man movies.

The odd thing is that WandaVision still does not have an official release date. Though originally scheduled to land this December, Disney has not confirmed a date other than to say that it is coming soon. Meanwhile, The Falcon and the Winter Soldier has returned to filming and Marvel has found its She-Hulk as well.