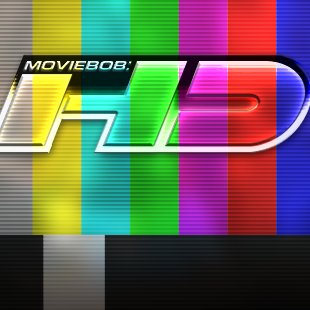 80s syndication was often bad, but sometimes memorably so.

My parents used to tell me, in tones that indicated I was supposed to be impressed, that when they were my age there were “only three TV channels.” Technically, what they meant was that there were only three national broadcast networks (ABC, NBC and CBS) but the basic idea held true. I don’t imagine I’ll be able to wow my children/grandchildren with anything that stark yet relatable in terms of technological difference — even now, telling Millennials that I lived for over a decade in a world where The Internet simply did not meaningfully exist draws an incomprehensible stare, as though I was suggesting that human beings didn’t have mouths until around 1996.

In any case, when I was of the age that my parents were telling me the “only three channels” story, the nature of television-viewing options was… complicated. The 1980s were still the days of analog broadcasting, whereby TVs picked up signals broadcast by local operations called “stations” (if you were “rich” and had cable, those were usually separate channels) of which there were generally two types — which is where things got a little confusing.

It broke down like this: Just about every territory had access to at least three “major” local-area stations that served as Network Affiliates; meaning they had contracts to air the scheduled programming of one of the three national networks (with “free” space otherwise mostly given over to local news or paid programming) and one affiliate for Public Broadcasting (PBS). But certain markets also had additional “independent” stations that weren’t network affiliates and instead either produced their own programs or purchased regional broadcast rights to programming produced (largely) outside the Network system for this very purpose. This model was called Syndication, and with U.S. television consumers in the 80s and 90s demanding more entertainment options at a faster rate than pre-digital broadcasters could deliver them, it was big business.

We’ve talked about the full-blown explosion of syndicated TV in the 90s in a previous column, but the ball first got rolling in the 1980s. At the time, broad sitcoms were the “in” thing to produce, and if you had one that wasn’t quite good enough to get onto a network schedule (or had been canceled off of one, in some cases) you had a better shot than ever to get it on the air in syndication.

80s syndi-coms are mainly remembered for being… well, awful, but memorably so. Here’s a sampling of the kind of shows that gave rise to the phrase “X amount of channels and still nothing is on!” 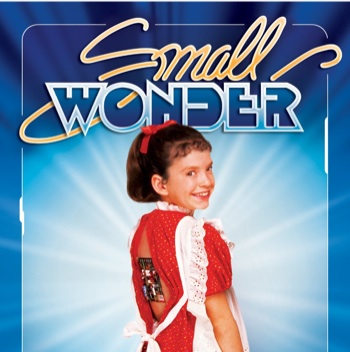 SMALL WONDER
“High-concept” came back into fashion in a big way in the 80s, and syndication was a major beneficiary: Since they were under no obligation to air in primetime slots, a canny syndicator could make big advertiser bucks by putting “Not quite Alf, but something similar!” in a kid-friendly time-slot. The most notorious success of this model? Small Wonder, aka “What if Data was a little girl?”

Premise: A robotics engineer invents a fully-functioning, indistinguishable-from-human (complete with synthetic skin and hair!) artificially-intelligent robot… which he for some reason builds in the form of a perpetually pre-pubescent girl whom he takes home to his suburban wife and (human) son to raise as a daughter. For maximum creep-factor: In the pilot, he presents her to his family first as a briefcase full of (naked, flesh-colored) disassembled parts, and later boasts about having dressed and assigned a hair-color himself. This is all supposed to be A.) funny and B.) heartwarming, incidentally.

For an inexplicable four (four!!!) seasons, “Vicki” (Voice Input Child Indenticant) had formula sitcom adventures premised mostly around the need to keep her existence a secret (Dad’s conniving boss was also his snoopy neighbor, because plot convenience) versus misunderstandings and her brother’s attempts to use her robotic powers (superhuman strength and cognition plus whatever else a plot might call for) for mischief or personal gain.

The show underwent a slight change in tone for its third season, with Vicki receiving a body “upgrade” and wardrobe change to explain actress Tiffany Brissette having, y’know… aged noticeably, as human children are wont to do. They also introduced an “evil” version of Vicki, “Vanessa,” who I can only assume will end up as the main nemesis if they ever make the feature film version of this somebody threatens to greenlight once every few years. 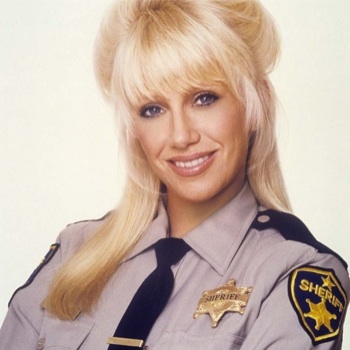 Don’t ever let anyone tell you that a culture can’t slide backwards from societal-evolution. TV of the late-60s and 70s reflected the social progress of those eras in terms of what was considered “normal” enough to show on TV: Sitcom moms got jobs, young women happily chose careers over marriage and/or kids, Maude had an abortion and wasn’t even remotely “punished” for it.

But lionizing corporate greed and reviving Red Scare anti-communist paranoia weren’t the only ways we decided to take a big step backwards in the 80s, and so we got this bizarre time-unstuck series premised entirely on the notion of a woman becoming a sheriff being innately strange and humorous.

Suzanne Somers had the lead role of the not-too-bright (because of course she wasn’t) widow of a local sheriff who stepped into his role after he died unexpectedly. Much of the humor was supposed to come from her clashes with a sexist colleague who doesn’t think she should have job, a setup which would have more teeth if the series didn’t seem to tacitly agree with him. 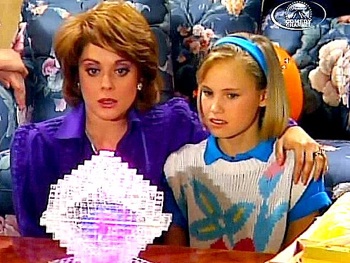 OUT OF THIS WORLD

Out of This World had one of the all-time misleading openings to a TV series: A sci-fi comedy, its opening credits featured spaceships, alien worlds, futuristic cities and otherworldly aliens chilling out watching holograms about one of them (presumably) having spent time on Earth wherein he met, fell in love with and married a human woman before being unfortunately recalled to his homeworld to fight in a war.

But that was pretty-much all we got of that kind of material in this series, which was actually about the teenaged exploits of said human/alien couple’s hybrid daughter, who looks human but has various telekinetic, reality-warping and energy-based powers apparently inherited from her father; whom she can communicate with via a crystalline cube (he speaks with the voice of an uncredited Burt Reynolds, who was smack-dab in the middle of his first “I’ll do literally anything” career phase).

Of some note to film/TV aficionados, the show was notable for featuring the great Doug McClure in one of his more prominent late career roles as an Adam West-inspired former TV actor turned local politician. 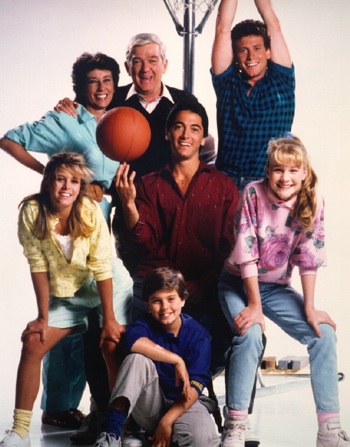 CHARLES IN CHARGE
Similar to the scenario with She’s the Sheriff, another thing 80s TV found “hilarious” was men holding ostensibly female-skewing jobs like babysitting. On networks there was the popular Who’s The Boss?, a gender-flipped spin on the time-worn “single-dad/hot-housekeeper” setup, and syndication (well, syndication after a single failed season on a regular network) gave us this “gem” about a college guy working as house/child-sitter for a well-to-do New Jersey family in exchange for room and board in their house.

As mentioned, the show originally debuted on NBC as a ratings failure, mainly imagined as a star-vehicle for not only Scott Baio but also Willie Aames; as they had starred as buddies in the 1982 telekinetic-teenager sex comedy Zapped. Effectively the entire cast quit other than Baio and Aames for the syndication run, so a new family was introduced as having bought the house and opting to keep Charles as a tenant under the original arrangement… because that sounds like a thing that would happen.

Charles in Charge (which featured a recurring plot device wherein being hit on the head would briefly transform Charles’ personality into that of an “evil” counterpart named “Chaz,” to give you an idea of the tone at play here) isn’t exactly as bad as other offerings on this list, but it’s still pretty bad. It was also pretty popular in its day, though much of that may have been owed to Baio’s status as an enduring teenybopper sex-symbol. This was probably the high point of his career, though fellow castmember Nicole Eggert went on to stardom on another syndicated smash, Baywatch. Willie Aames had a slightly different career trajectory, all but vanishing from the TV/film scene before re-emerging in the 1990s as Bibleman.