The conventional wisdom is that the entertainment industry is recession-proof, but this thinking hasn’t really been tested against the videogame industry as it exists today. No, I’m not talking about those modest economic downturns we get from time to time, like the amusing little dips near the end of a rollercoaster. I’m talking about serious recessions where a guy with an MBA is competing against a dozen other people with even better educations for a night shift job mopping the floors at Wendy’s.

Experts disagree on how severe this current recession is. Of course, they also disagree on the causes, the solution, how long it will last, and how stupid they look in bowties. (Which sort of makes you wonder what the hell we keep them around for in the first place.) Some are predicting that any minute now a rainbow bridge will descend from heaven and link us to a magical dimension of free money which will make things a little better. Others are warning of the coming job jobocalypse where we’ll fight to the death for minimum-wage jobs flipping burgers made of human flesh in a wasteland of suffering, cannibalism, and runaway inflation.

The one thing they do seem to agree on is that people don’t have as much money to throw around as they did this time last year. Everyone seems to be taking note of this except the game companies, who continue to offer games at the same price points and never make any effort to reach out to lower markets. They price things as if all gamers were wealthy people with unlimited job security. I think that now would be a very good time for them to stop doing that.

Games appear on the shelves in the United States for $60. They might appear in other English-speaking countries for nearly twice that, even if the local economy is the same or worse. It would be cheaper to buy a game in America and mail it to Australia along with a brick than for an Australian to simply drive to the store and buy the game himself. Publishers never talk about or explain these reality-bending markups, and gamers can’t help but feel they’re simply being ripped off.

As games mature on the shelves their prices don’t usually fall very far. They might drop $10 or $20 during their shelf-life, but an overwhelming majority of them simply vanish long before they hit the bargain-bin range of sub-$20 prices. The bargain bin tends to be filled with cheap shovelware, low quality games, awful movie tie-in titles, and “collections” of simple games that can be found for free online. Once in a long while you might spot a hit from a few years ago mixed in with the dross, but all too often it feels like digging for gold in asphalt using a shovel made of your own money.

How much a particular person likes a game can vary widely, and $60 is a lot to put at risk on something as dicey as whether or not this game will be an adventure into another world or an expensive port of Simon Says. You can point out that games are more economical in an hours-to-dollars sense compared to movies, but that’s one of those things about economic lean times: People don’t get that much dosh together in a single pile, all at one time. It’s easier to come up with $8 for a movie than $60 for a game, even if the game is more economical in the long run. (Assuming that’s even true. Lately games are becoming more and more like teenage sex: Risky to try, poorly executed, and embarrassingly brief.) 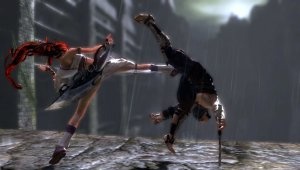 Some thrifty gamers want to join in, but the good games never enter their price range. So, they figure they’ll pirate the game. Since I can’t buy the game anyway, it’s not really a lost sale, is it? I’m not defending this line of reasoning, but it exists, and represents a segment of the population who would purchase the product if they could.

We need a way for a single title to serve the various market tiers. Some people can still afford those lavish $60 beat-it-in-an-afternoon adventures like Heavenly Sword, and other people can’t really pay more than $20 unless they want to end up pushing their car to the unemployment office every week. All publishers need to do to serve both markets is to make the price of the game fall as it ages. I’m not talking about the way used copies decline in value, I’m saying the price of a new copy of the game should go down, and keep going down instead of disappearing from the shelves forever. Not everyone is a hard-core RPG fan who is driven to play Mass Effect. But some of those people would play it if it was cheaper. Some would buy it if they could afford it. If the game dipped into those lower price bands, it could pick up these other potential customers. But publishers would rather have a game go out of print than pick up all the people looking for $20 bargains. Given how cheaply disks and boxes are to produce, this is basically refusing to sell plastic and cardboard for $20. The game is done. Sell it to as many people as will buy it, because it’s all gravy now.

Even better, a steadily dropping price would put outfits like EB Games on the defensive and undermine their entire used games pawnshop scam. They can buy a game back from a gamer, but while it’s sitting on the shelf waiting to be bought yet again its value will be eroded by the falling prices of the new copies. Retailers couldn’t afford to let the game sit on the shelf too long, or they’ll end up losing money as the price drops below what they paid the gamer. They will be forced to counter by either lowering prices in order to move them faster, or offering gamers less for their used games. If they do the former, then gamers win. If they do the latter, publishers win. Either is better than what we have now, which is EB Games skimming the cream off the transactions between gamers and publishers.

A system of falling prices makes sense for customers as well, since multiplayer-enabled games really do lose some of their gameplay value over time. Right after release the online community of a game is active and robust. Two years later it’s a fraction of its former size and glory, and will have less to offer newcomers.

The hardcore pay top dollar to play a game on day one, the average customer picks it up a few months later for a bit less, and more thrifty customers will get the game a couple of years later for cheap, just as the sequel is coming out. A game can keep making money and keep bringing new people to the franchise as it ages, and low-income gamers will have one less reason to pirate. What is it about this “making money” stuff that publishers aren’t happy with?

And to publishers: Will you please build a branch office in Australia so you can get a handle on the prices down there? If you need help, let me know. I’ll mail you the bricks.

Shamus Young is the author of Twenty Sided, the vandal behind Stolen Pixels, and had to give up doing drugs to pay for his videogame habit.