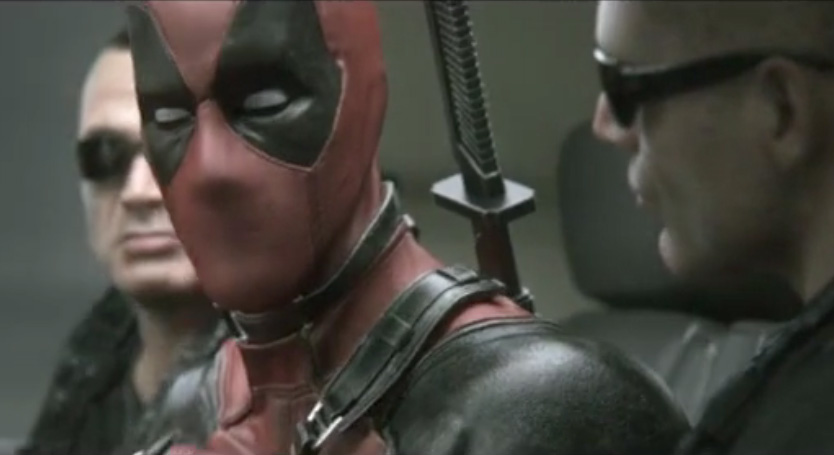 Blur’s proof of concept footage, starring Ryan Reynolds, was leaked by hackers, NOT the studios.

Update 2: Fox did not respond to our request for comment, however their lawyers did respond to us posting the video. We have now taken it off the articles.

Update: Tim Miller, co-founder of Blur and director on Deadpool responded to us via email, stating that he’s unable to discuss the issue.

Original Story: One of the biggest bits of news that’s hit comic book fans in the immediate post Comic-Con rush had nothing to do with anything actually shown in the infamous Hall H, or anywhere on the show floor for that matter. It was two minutes of the most awesome shaky phone camera videos ever leaked to ‘net. The video showed what claimed to be early CGI test footage of Fox’s long-delayed feature film starring Marvel’s Merc with a Mouth, Deadpool, featuring voiceover work by Ryan Reynolds. As fast as the footage was being posted, it was being removed by the powers that be at Fox.

Then, on Tuesday, a new higher definition version of the clip started making the rounds. The video opens with Deadpool rocking to the beats of Gwen Stefani and breaking the fourth wall, before diving from an overpass into a moving SUV via the sunroof. What followed was one of the coolest close combat fights ever, filled with Deadpool’s (and Reynolds’) signature smart ass personality. It was a sight to behold … if you could find it.

The footage actually comes from a proof of concept package put together three years ago by Blur Studio, the folks behind many of the best video game cinematics in the industry. Tim Miller, co-founder of Blur, had just been tapped to direct the Deadpool feature and tasked Blur with putting together an eight minute video showcasing the potential of the movie. As an added bonus, Miller brought Reynolds into Blur Studio to voice the character. The package was well-received by Fox execs, but the film has since drifted off the radar, despite all parties involved claiming it had not been axed and was still in development limbo.

So where did this three year old, two-minute snippet of test footage come from all of a sudden? Due to the coincidental post Comic-Con timing of the leak, many believed that Fox had secretly released the footage to help gauge current interest in a Deadpool solo flick. Then, once the hi-res version made its way online, it was being reported that, due to popularity, Fox and/or Blur had decided to officially release the clip. Deadpool creator, Rob Liefeld, talked about the footage on Twitter:

To ALL who have enjoyed seeing the DP footage, enjoy it for what it is. Test's are done for films all the time and you have glimpsed process— robertliefeld (@robertliefeld) July 29, 2014

Even employees at Blur took to social media to show off the video links and take pride in the fact that the work they had done was finally seeing the light of day. Then, just as quickly as the clip started to disappear, so too did the posts associated with Blur employees. It would seem that the official release of that Deadpool footage wasn’t so “official” after all.

According to sources, the footage had actually been obtained and released not by Fox or Blur, but by hackers who managed to grab the clip and send it into the wild. After seeing the posts from Blur employees making the rounds, Miller sent a notice to all personnel early Wednesday asking them to remove the posts and to “cease and desist” discussing the clip any further at this time despite the proverbial cat already being out of the bag. We’ve reached out to both Blur and Fox for comment about the footage and the hack, and will update this story with any response.

It shouldn’t be too hard for Blur employees to keep quiet. The studio is hard at work on numerous other projects, including working with Microsoft and 343 Studios on new, remastered cinematics for the Halo: Combat Evolved and Halo 2 portions of the upcoming Halo: The Master Chief Collection for Xbox One, due out on November 11th.

As far as Deadpool goes, if you haven’t already seen the leaked clip or just want to see it again, check it out for yourself below (for at least as long as it’s available), and let us know what you think.