What I took away from FFX’s Every Simpsons Ever marathon wasn’t quite what I expected.

Well, well, well. Would you look at that.

It’s always struck me a little strange that one of the most inflammatory things someone can say about modern popular culture is to suggest that The Simpsons was still airing good episodes after its tenth season. Well… it used to be the tenth season, at least — the cutoff now tends to be whatever season the person complaining went off to college, work or whatever other activity superseded regular Sunday night TV prime-time viewership.

That FXX’s 12-day, 288-hour marathon celebrating the series’ exclusive-arrival to the cable network would become an ongoing pop-culture mini-phenomenon unto itself seemed to catch the entertainment media by surprise — doesn’t anyone who wants to watch classic Simpsons episodes for that long already own all the DVD sets? — but I can’t see how it was anything but inevitable. Fan or not, this particular show has run for so long and been so popular that it remains one of the last examples of a near-universal cultural touchstone. Finally, something to reference on social media that won’t just be a shout into the void or (at best) the other two or three people you know who like the same thing. Everyone “gets” a Simpsons reference, even if they don’t.

(In fact, this was actually the premise of a high-concept off-Broadway production, Mr. Burns: A Post-Electric Play, which imagines a post-apocalyptic world where the ability to recall, share and thus help others remember jokes, characters and storylines from The Simpsons has become the new currency of a civilization putting itself back together — the last shared connection humanity has to an increasingly distant past.)

For my part, re-watching it (or, rather, using it as 12 days’ worth of periphery-viewing background-noise while I wrote columns and edited videos) has been pretty delightful: There’s a lot of memories attached to these old episodes… but not necessarily of the episodes themselves. I find myself realizing that I’d been remembering details incorrectly, or that I recalled lines and references that’ve become part of my shared-language among family and friends as said by my family and friends more completely than the quotes themselves. It also helps put to lie the “Zombie Simpsons” fallacy — the notion of a seismic downward-shift in quality. There are good episodes as recently as last season, and entries from the infallible “classic” era that don’t really hold up. (Mr. Burns sexually-harassing Marge in Marge Gets a Job, Season 4 Episode 7? Not really that funny outside of the let’s-kidnap-Tom-Jones business at the end.)

It’s also been a godsend for watching the way the various characters — all of whom were broad caricatures of sitcom stock-types at first — develop their specific traits and personalities over time. TVTropes actually calls this “Flanderization” after the show, but the more profound developments occur with Lisa. She starts off as the good/smart contrast to mischievous-underachiever Bart, but quickly became the philosophical-center of the series (and a feminist icon besides) based on what 30 years of writers successively defined and redefined “good” and “smart” to mean.

Another thing that jumps out? The way unplanned later developments make earlier episodes feel strange: Like the way the unexpected passing of voice-actress Marcia Wallace puts a sad sting on the buildup to the marriage of Ned Flanders and Edna Krabapple, which had been shaping up as an interesting new direction for the two major supporting characters. But it’s the first Mrs. Flanders who caught my attention this time. 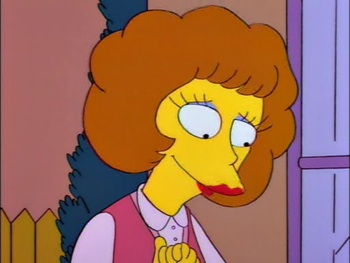 Maude Flanders was never the most important character on the show, even among her own family. Ned, as a foil to Homer, was always the “top” Flanders, and a consistent (though very-much “of its time”) downside to the early years of The Simpsons was that female characters outside of Marge, Patty & Selma, or Mrs. Krabapple generally didn’t have much initial identity outside of being the wives/mothers of other, more prominent male or child characters. Maude’s character was “Ned’s wife,” and she mainly tended to get used outside that context only for scenes that required a group of female semi-regulars for plot purposes.

Of course, Maude’s most famous moment in the show was her death in Alone Again Natura-Diddily. It’s retroactively transformed her into a Springfieldian Saint given the dimension it adds to Ned’s usually comedic spirituality and the humanity it affords to the innately-sympathetic Rod and Todd. When she’s glimpsed in flashback (or in Heaven) it’s for sentiment, when she turns up as a ghost (or the bride of Satan, once) in the Treehouse of Horror specials it’s The Simpson’s version of soft-blasphemy — putting a funny hat on the Virgin Mary.

But a strange thing happens if you re-watch the show from the beginning and pay attention to what the storylines actually did with her character before anyone ever knew they’d be killing her off: You start to notice that Maude Flanders… just wasn’t very nice. Even once the show had decided on hyper-religiosity as the Flanders family’s defining trait, she kept the acidic edge opposite Ned’s unflappable nicety. All that has been wiped away by her death in the modern series, but watched in proper order she manages to exhaust sympathy almost immediately — almost to the extent that Alone Again… starts to feel like the impending end for one of the bad guys. 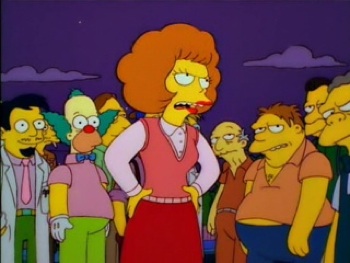 Not exactly grand-scale villainy, to be sure. But there are precious few “nice” moments to balance it all out, and when there are she was usually acting in-tandem with Ned or silently as part of a group effort. For the most part (and especially whenever she appears as part of a “Marge Story,”) there are almost no real traces in the actual “Maude Era” episodes of the kind, benevolent character the post-death mentions of her have painted.

What does this mean? Not much. Is it significant? Not especially. But in knowing in advance that I (and a lot of other TV critics, I’ll wager) would be writing-up “post-marathon” impressions of the stature of The Simpsons, it was hard not to keep one eye open for an “angle” — and, to be honest, “Huh. I’m almost sort of looking forward to Maude getting killed off” was not a thought I was expecting to cross my mind…

…good thing it did, though, because otherwise you’d be reading about how Apu Nahasapeemapetilon somehow became less of an ethnic caricature the more India-specific traits were added to his character — and I promise you, it wasn’t going to be as interesting as that might sound.