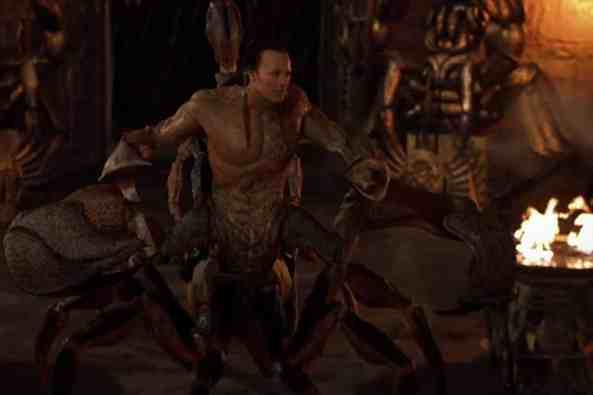 The Scorpion King is about to raise its disturbing CGI head once again as Dwayne Johnson has announced that his production company, Seven Bucks Productions, is rebooting the film series for a new generation. The new movie will be a modern-day take on the franchise, with Jonathan Herman (Straight Outta Compton) writing the screenplay.

“The Scorpion King was my very first role ever on the silver screen and I’m honored and excited to reimagine and deliver this cool mythology to a whole new generation,” Johnson said, sidestepping that he was mostly just a CGI scorpion when the character first appeared in The Mummy Returns. “I wouldn’t have had the career I’m lucky enough to have had it not been for The Scorpion King and I’m thrilled that we at Seven Bucks Productions can help create those same opportunities for other hard-working actors today. I believe Jonathan Herman will put in the hard work to deliver a fantastic script for our global audience.”

The Scorpion King franchise is an odd one. The film series was decidedly B-grade and never really took off with audiences after it spun off from The Mummy. The first The Scorpion King was panned by critics and audiences, and its $165,333,180 global box office wasn’t necessarily a resounding success. The franchise then produced three more non-theatrical releases without Dwayne Johnson that got lower and lower in quality until the comically bad The Scorpion King 4: The Quest for Power landed. While someone out there was clearly paying for these, it’s hard to argue there’s a great demand out there for more Scorpion King content.

However, Johnson clearly sees something there, and the guy knows how to churn out hits. Moving the series to the modern day could breathe some fresh life into it, and if there’s a budget behind it, there could be some decent action. It will be interesting to see if Johnson taps some other popular wrestling talent to make a star as he perhaps hints at in his quote above.

This isn’t the only reboot Johnson is working on, as he’s also producing a new Big Trouble in Little China. The actor has a slew of projects in the work outside of that, including a sitcom based on his childhood and, of course, his entry into superherodom with Black Adam.