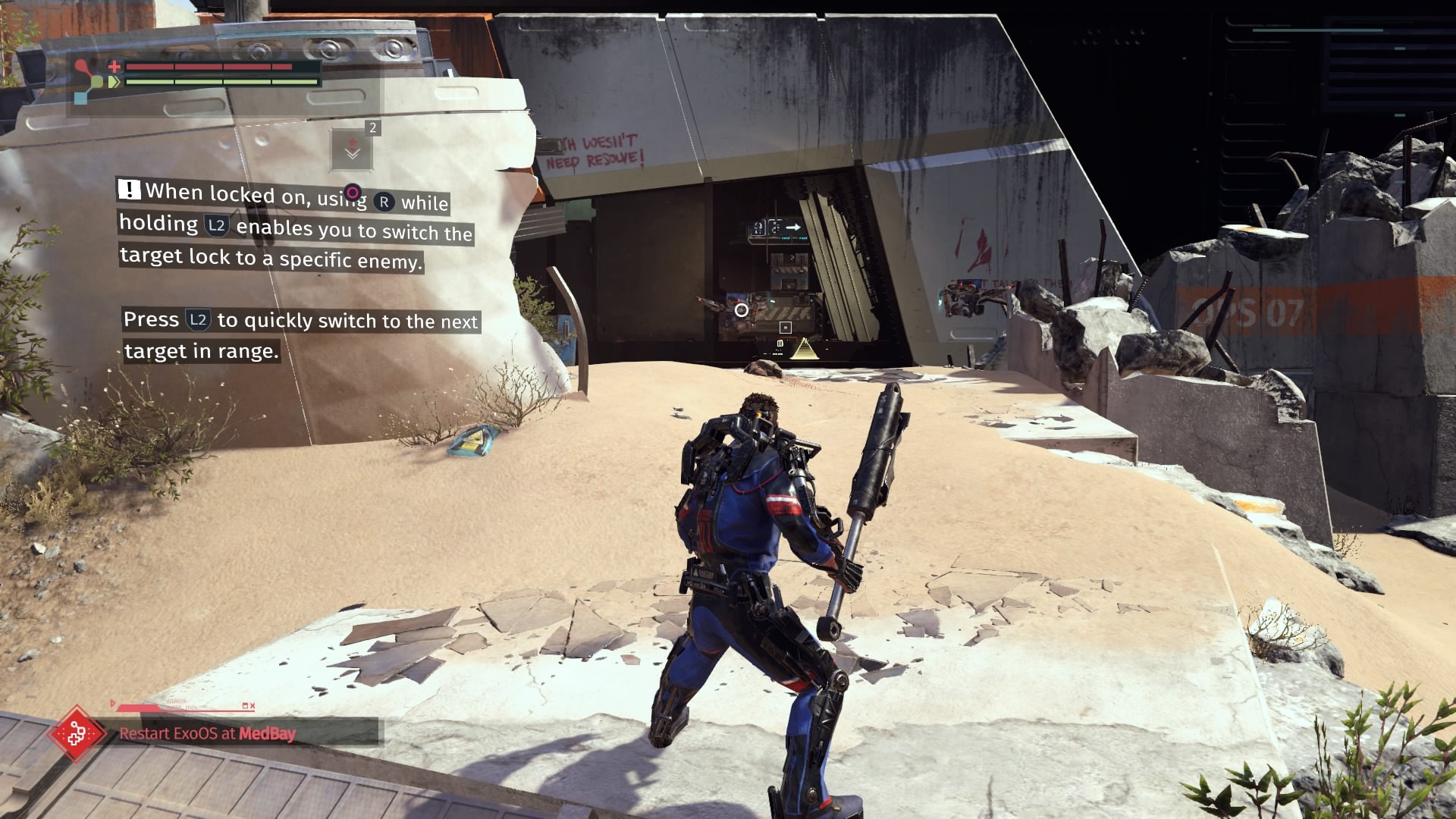 Put your best cybernetically-enhanced foot forward with The Escapist’s definitive beginner’s guide for The Surge.

To put it bluntly, The Surge is a Souls-like third-person action RPG — only, you’re exploring a derelict sci-fi facility rather than an ancient fantasy ruin. While the setting is different, many of the core facets of a Souls game are still firmly in place — deliberate combat, difficult bosses, and complex levels with tons of shortcuts.

That leads into the first tip on our beginner’s guide. We’ve compiled a total of 9 tips below, covering everything from general hints to combat tips and implant recommendations.

If you want to survive in The Surge, you’ll need to learn your opponents and learn your environment. That takes repetition, and it’s much better to search every nook and cranny than to barrel forward. You’re always safest when taking on enemies one-on-one. Thankfully, enemies in The Surge often glow with faint electrical light, making them pretty easy to spot, even in the dark.

The starting area is replete with bonus crafting materials — if you spend a little time searching. Smash through crates to find hidden spots, and learn the jumping mechanic to reach out-of-the-way areas. To jump, simply sprint [L3] and press the sprint button again to jump.

Enemies are the major danger in The Surge, and you’ve got a few observation tools in your bag of tricks. Early on, you’ll locate an Implant that allows you to see enemy health bars. This is critical for harvesting Rig Gear — equip it ASAP.

You’ll also notice that different parts of the body can be attacked when you lock-on. We’ll got into more detail on that particular subject, but instantly you can scout out an enemies weak points — blue areas are unarmed, and orange areas are armored.

Each area of The Surge is one complex maze. There’s only one Ops center, your home-away-from-home, in each zone. That means the only way to progress is to find and unlock shortcuts. These come in many different forms, so it’s important that you check every passage you find. 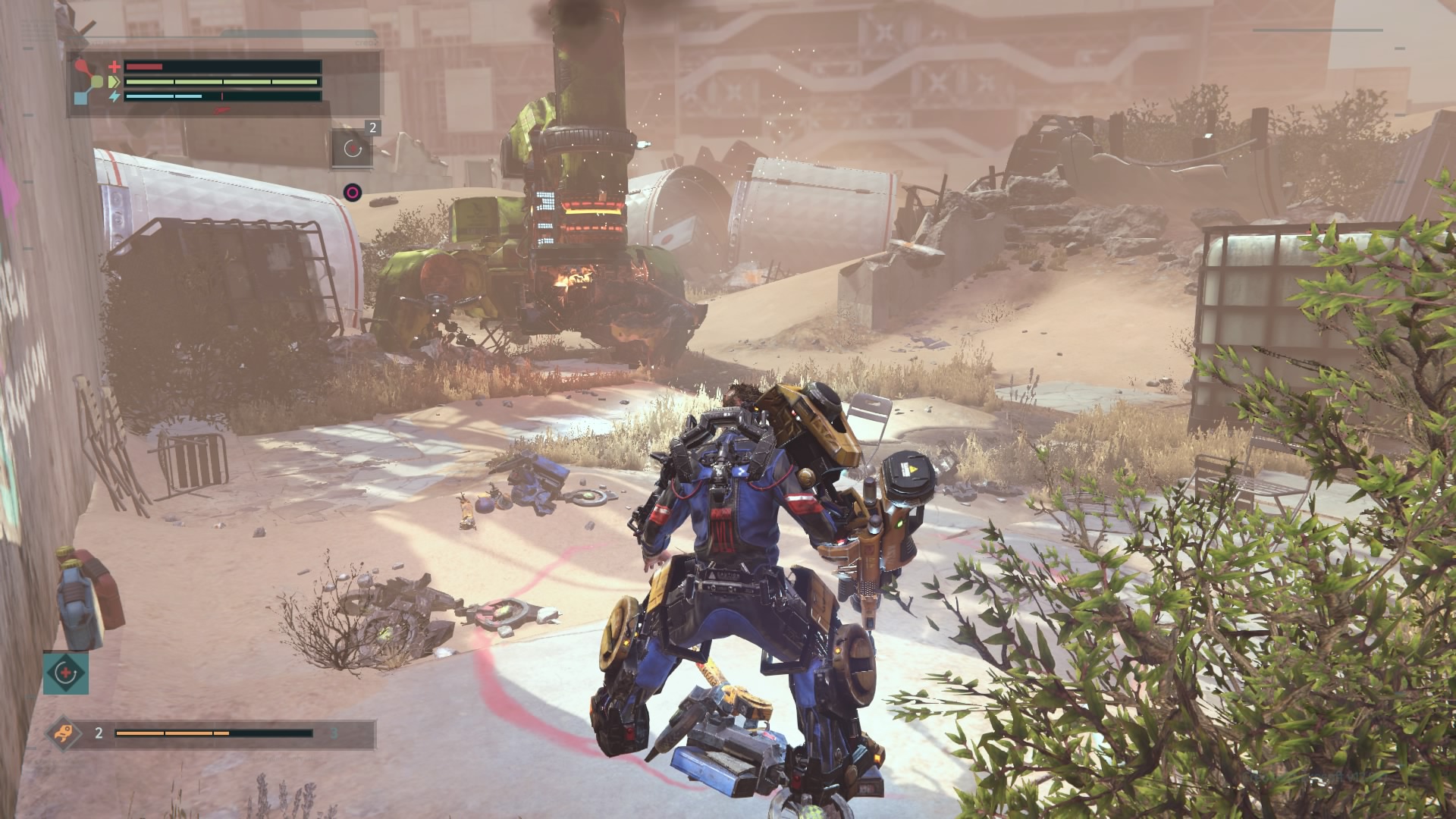 There are EXO Lifts — basically ladders you can activate from above or below to unlock unlimited traversal. Then there are locked doors. There are multiple types of locked doors, some require power to reactivate, others can be opened from the opposite side, while others will open after you’ve made a certain amount of progress.

Power Circuits can be the trickiest. Finding these numbered terminals is all-important, and you’ll have to level-up and spend that hard-earned Tech Scrap to gain more Power Cores. Power Circuits appear with a number. They’re either red or green. Green means you’ve unlocked enough Power Cores to Overcharge the Circuit, usually unlocking nearby doors. Follow the wires on the Power Conduit to find what you’ve just unlocked.

The last type of shortcut are vent covers. When you find narrow maintenance hatches with gates blocking your way, simply attack to cut straight through. Most other barriers can’t be destroyed, so we spent an embarrassing amount of time totally not realizing these grates can be smashed. 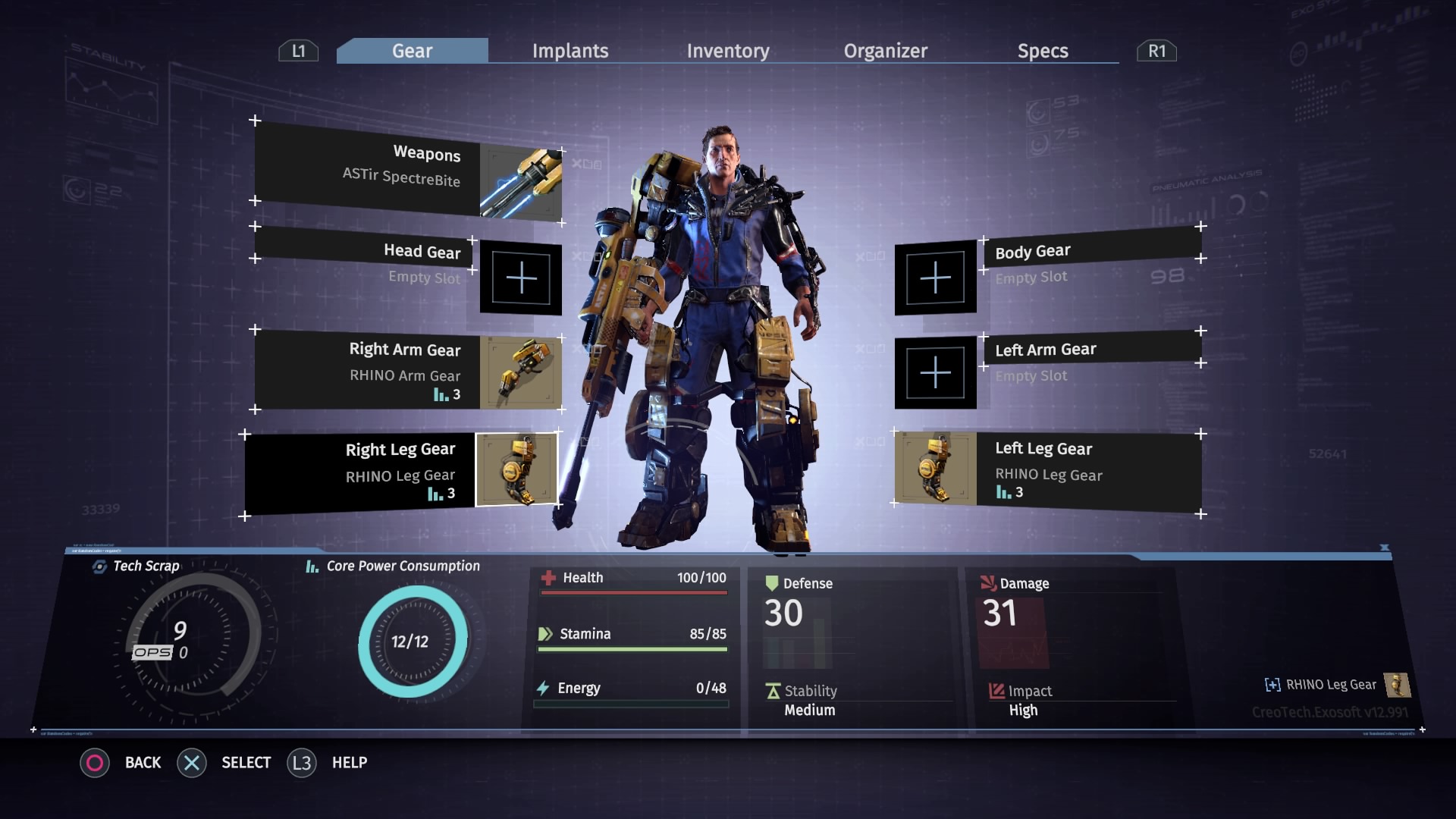 Tip #3: Salvage All The Parts From Your Enemies

Enemies are how to gain new weapons and Rig Gear in The Surge. Unlike Dark Souls or any of the other games in that series, you won’t find weapons just laying around the environment. Weapons can only be acquired from enemies, and new Rig Gear (armor, basically) schematics can only be taken from enemies. 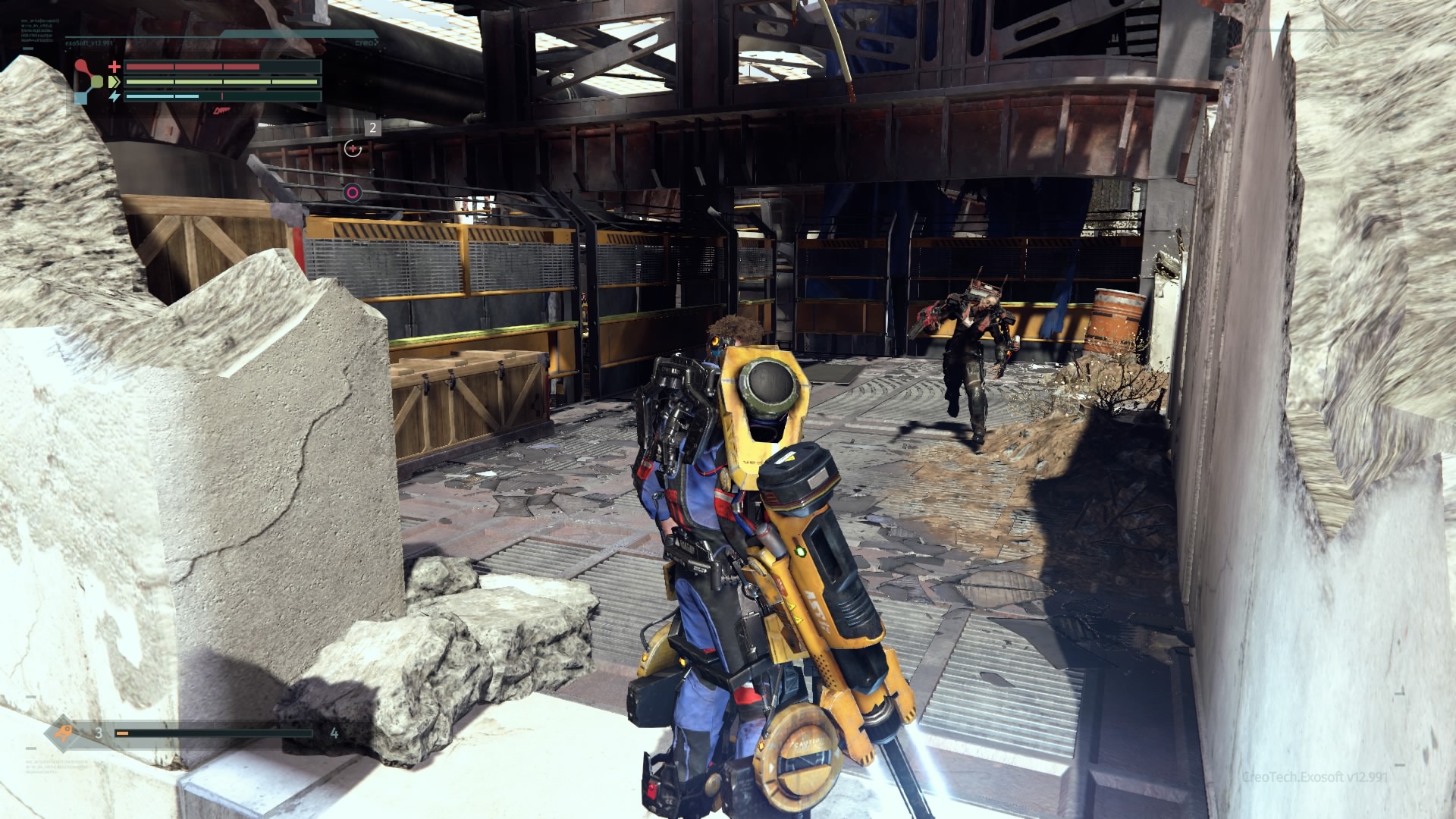 Whenever you see an enemy carrying an unfamiliar weapon, target their arm for removal. After dishing out enough damage, and getting enough energy, you’ll be able to unleash a Finisher. Finishers sever parts from opponents, and give you access to what they’re carrying. If you don’t target the parts, you’ll never get the gear.

There are a few bonuses when targeting and salvaging. First off, you’ll always do more damage when targeting a non-body part of an opponent. That’s just how it works. Also, unleashing a finisher puts Warren in an invincibility state for several seconds, and instantly kills the targeted enemy.

Even when you’re not trying to get new armor and weapons, you’ll still want to target different parts just to gain crafting materials. 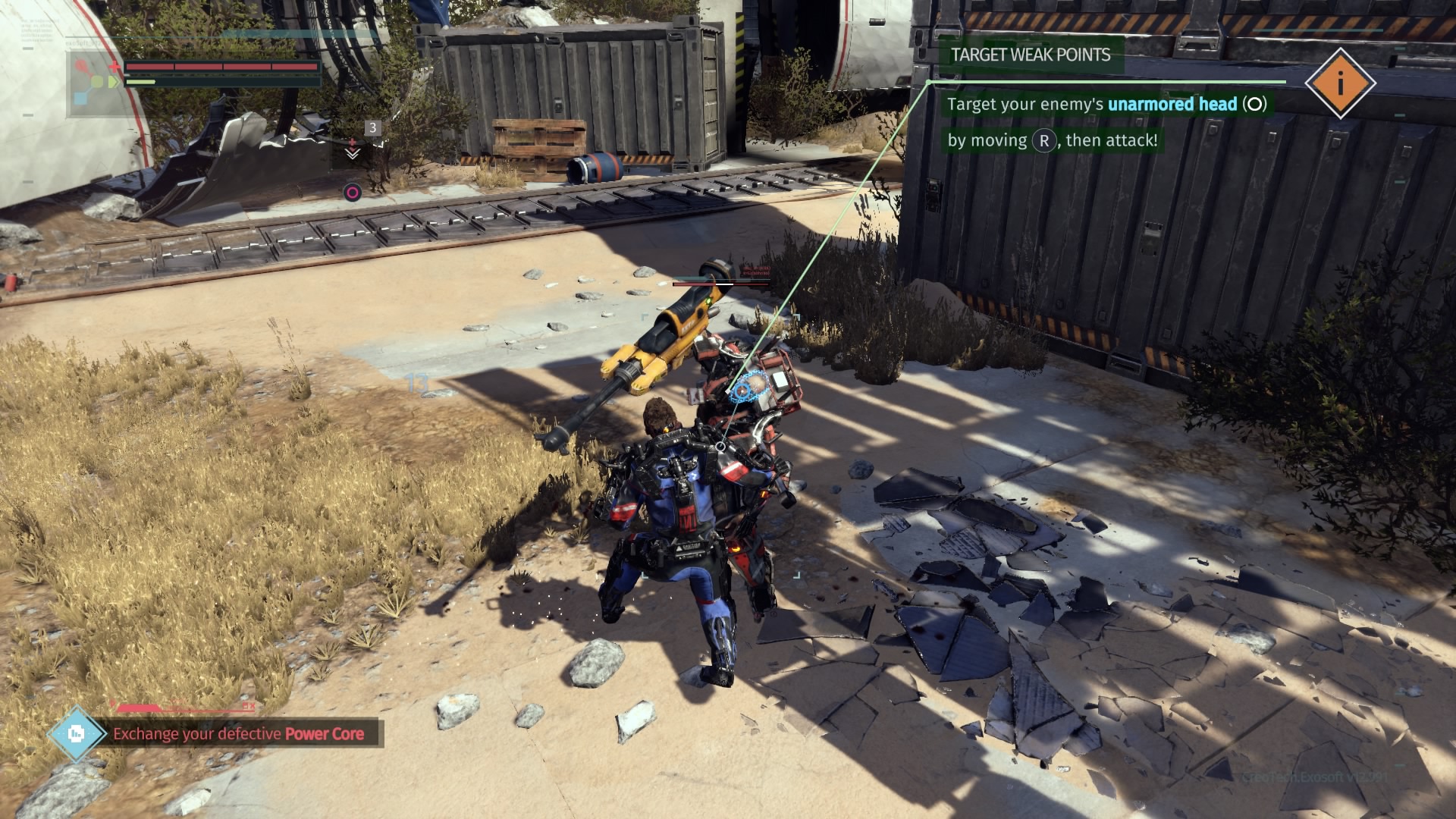 The trick of The Surge is that you can’t equip everything you want all at once. Everything, from weapons to armor to drones to implants requires power. The more power cores you unlock, the more stuff you can equip — but early in the game, you’ll have to choose. 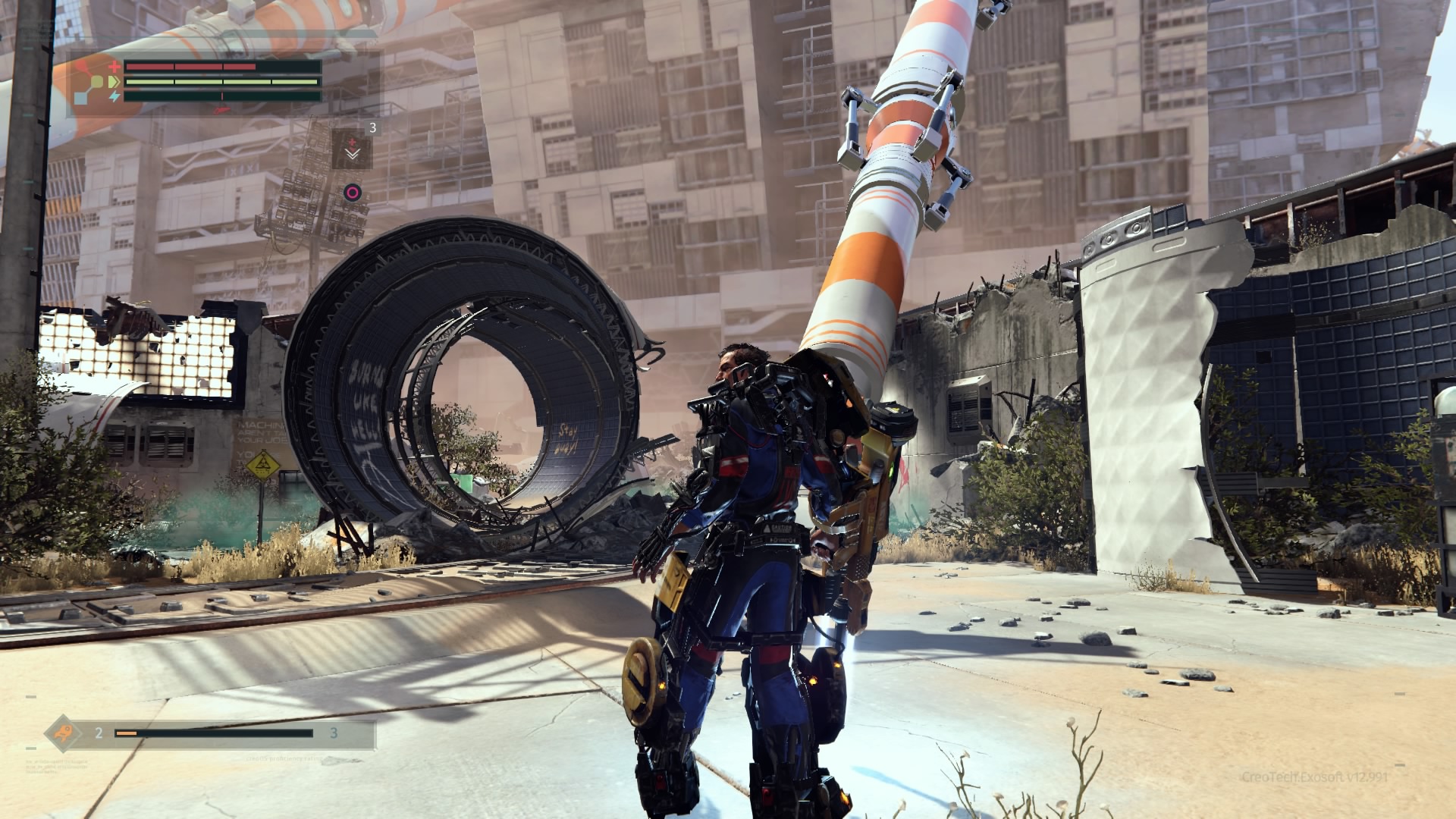 Implants, unlike weapons and gear parts, don’t need to be crafting. Rather, you’ll find them all over the environment. You start with a limited supply of slots, but as you increase your Power Cores, you’ll unlock more slots. Even at max, though, you’ll only have 8 implant slots.

Implants don’t just provide stat bonuses — they also unlock consumables to use. There are multiple types of healing consumables you can equip with implants, and you can even equip multiple of the same implant for more bonuses. That can be incredibly useful if you want more healing for a particularly tough boss battle.

One of the most important stats you’ll want to increase with implants is Stamina. Whenever you find the plus-stamina implant, it’s a pretty good idea to equip it. 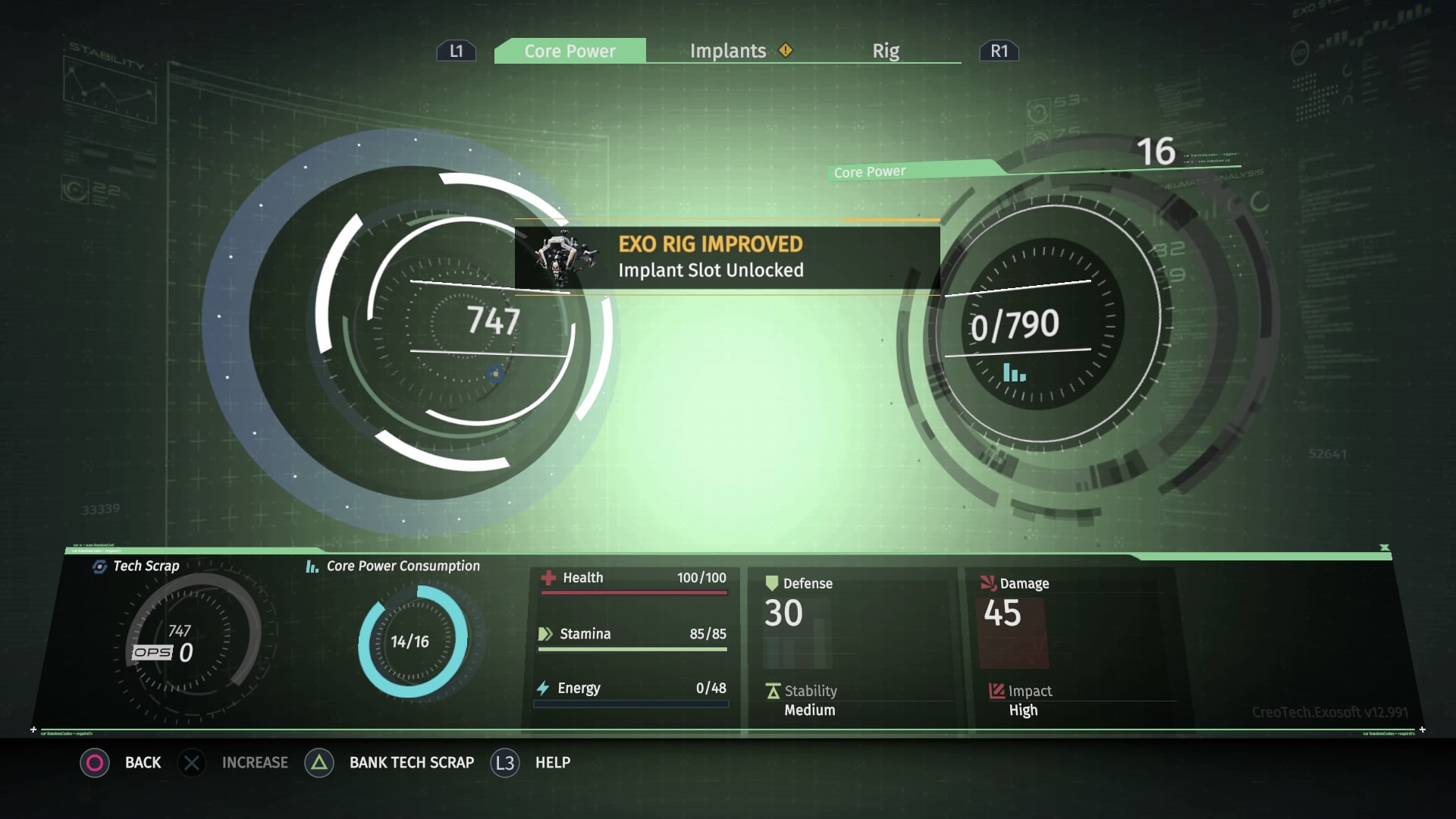 Tip #5: Yes, You Can Bank Your Extra Scrap

Here’s a simple tip, but it’s something us Souls-like fans can barely comprehend. Rather than restricting your Tech Scrap to a fleeting resource that’s lost if you don’t spend it, you can actually bank all that left-over scrap when you’re finished purchased and unlocking Power Cores.

This makes dangerous excursions into uncharted territory much, much less nerve-wracking. If you’re worried about that fat supply of Tech Scrap and don’t want to lose it, or if you’re saving your Tech Scrap for a rainy day, simply return to the Ops Center and bank it. You can bank using the Medbay or the construction / upgrade terminal. 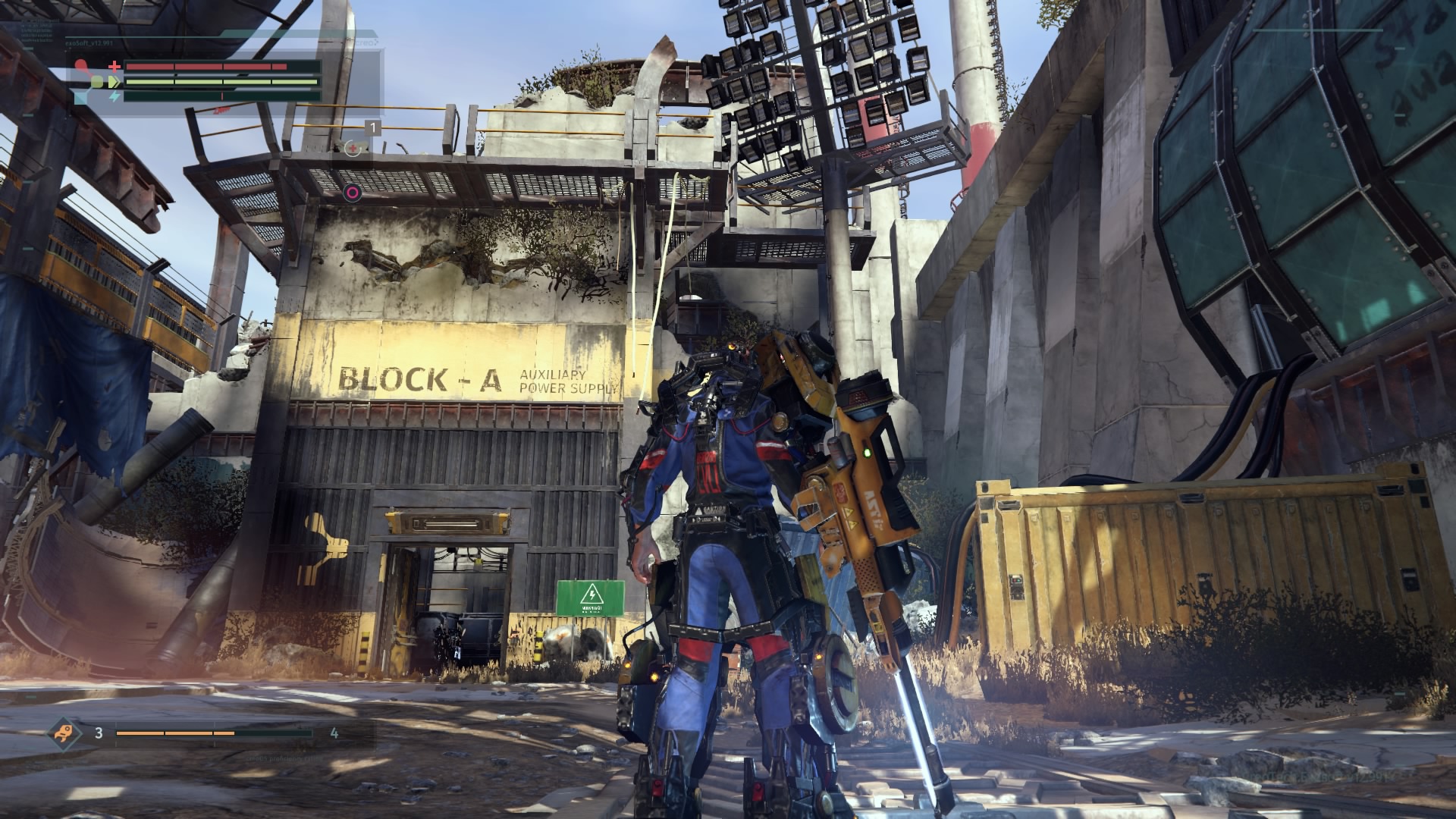 Tip #6: Died? Run To Get Your Scrap Back

This tiny alteration to the Souls formula actually puts The Surge in the “more difficult” category. Instead of giving you an unlimited amount of time to return and recollect your lost scrap, which is left behind where you die, just like other Souls games, you’ll be on a tight time-limit to recover it before the scrap is lost forever.

You’ll have about two minutes or so to rush straight to your deadzone and grab the scrap. Most enemies won’t chase you for very long, so it’s easy to simply sprint by enemies than fight every single one. Hopefully you’ve learned the map layout pretty well.

This is also why shortcuts are even more important. Being able to quickly access any area in a zone is critical if you want to be able to restore your lost scrap stockpile. 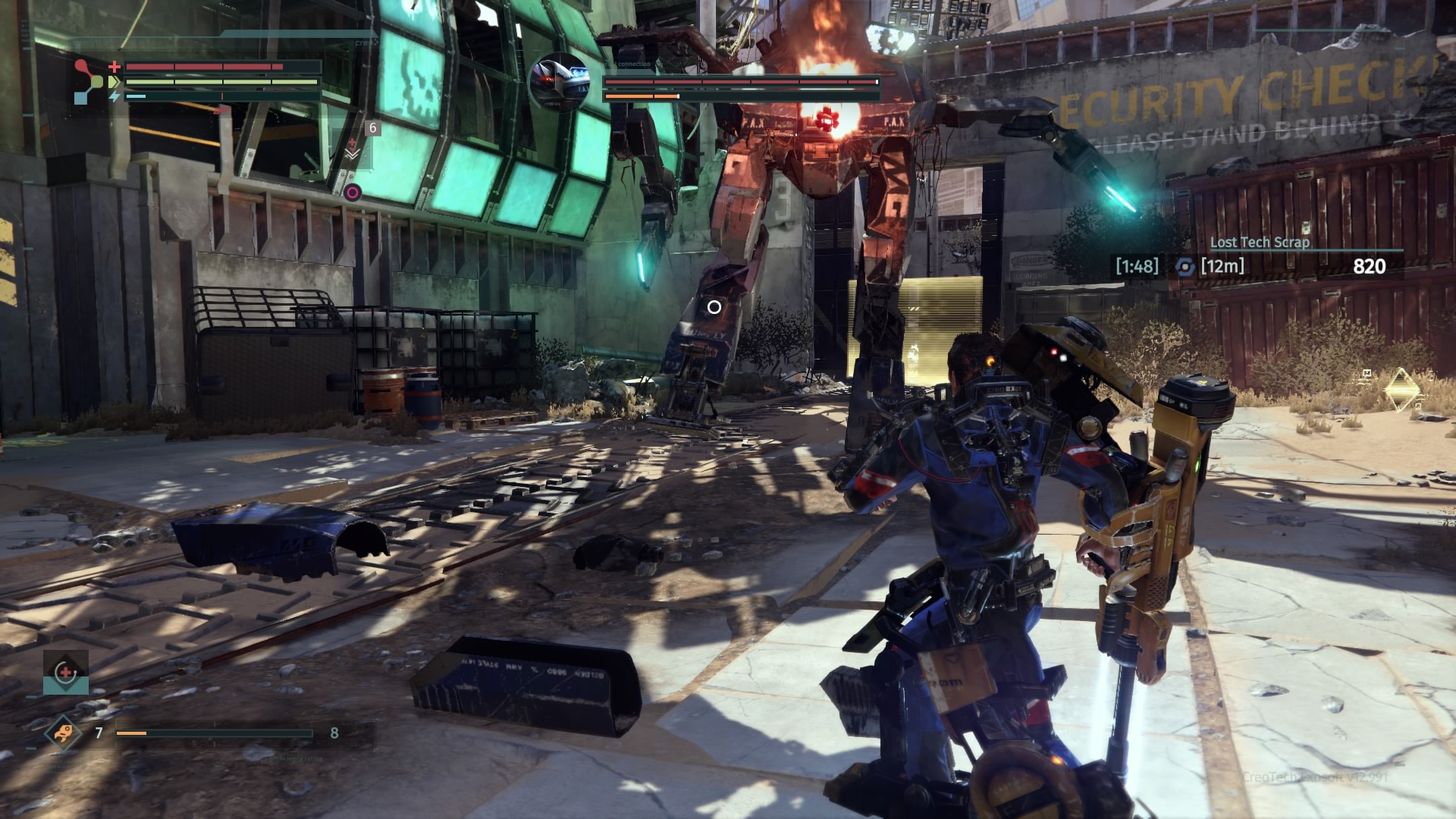 Tip #7: Bring the Right Heals For Every Situation

There are three types of healing implants in The Surge — the Plasmic Regenerator, the Vital Injectable, and the Medi-Voltaic Regenerator.

The Vital Injectable and Plasmic Regenerator are consumables — equipping one implant (early in the game) will provide you with 3 consumables. Like we mentioned above, you can equip multiple implants and stack — so you can double up for 6, 9, even 12 consumables.

It’s also important to remember just how these consumables heal you. Plasmic Regenerator heal over time — it’s a slow process, so it’s better to save these for between fights, or when healing small amounts of HP.

Vital Injectables instantly refill a portion of your health bar, making them indispensable for boss battles and other dangerous situations where you’ll need to heal fast.

The final type is a unique healing implant. The Medi-Voltaic Regenerator uses energy to restore health. Combine it with +Energy Gain and -Energy Decay implants, and you can effectively unlock an unlimited supply of healing. 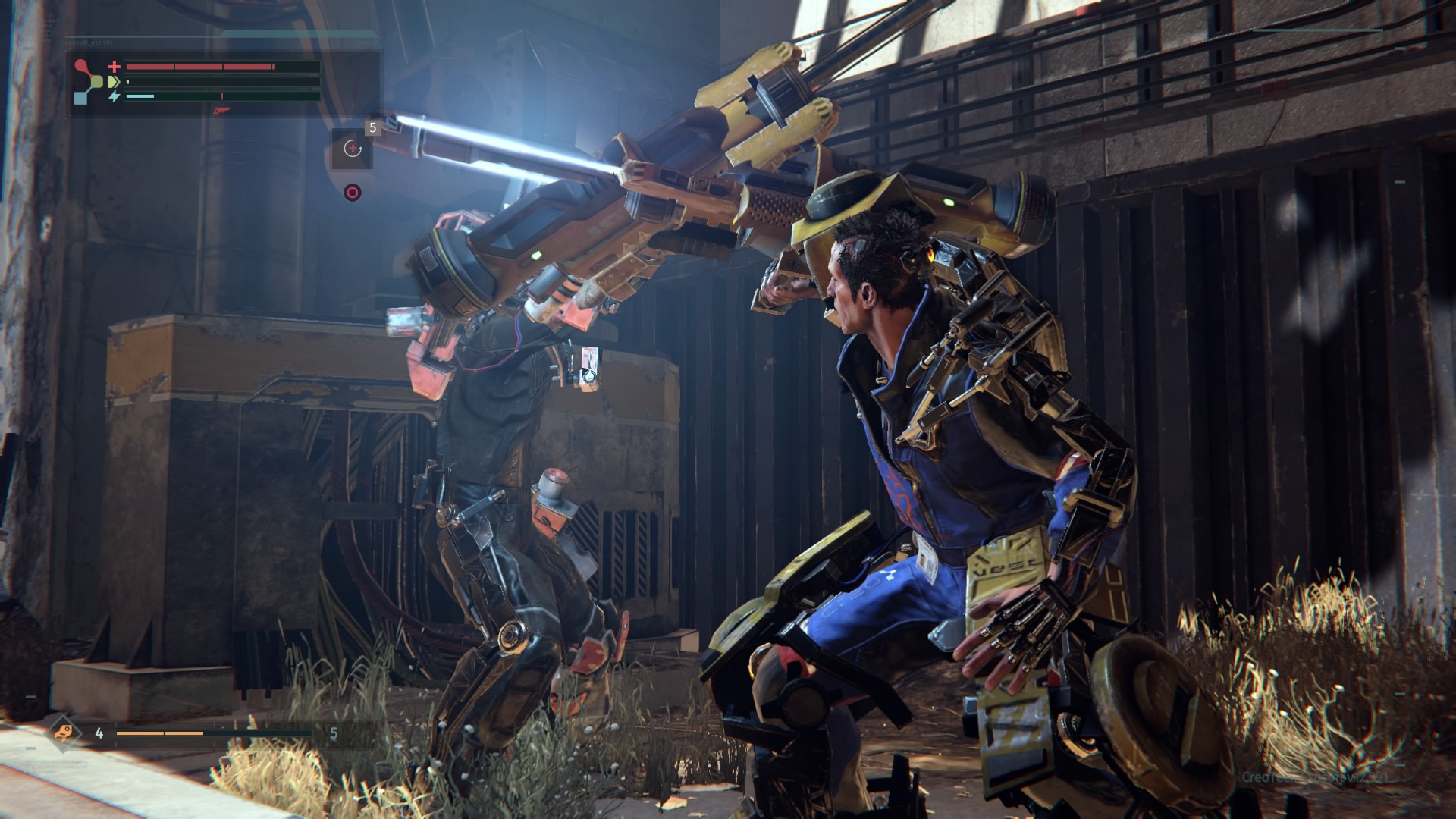 For the last tip, let’s talk about energy. More specifically, the Voltaic Dynamo implant. Energy is your third meter, just below Stamina, and you’ll earn Energy when you attack opponents.

Energy is fleeting, so it will quickly decay after you’ve earned it. Certain implants can slow the decay rate, but there’s no avoiding it — there’s no way to store energy for a rainy day.

That’s why implants like Voltaic Dynamo help. You’ll be able to earn more Energy per attack. That means you’ll be able to unleash Finishers faster, use Drone attacks more often, or heal up with the Medi-Voltaic Regenerator.

Energy is an easy-to-overlook resource. Finishers, which use Energy, will help you kill enemies faster, safer, and earn more Gear or weapons in the process. It’s a win-win-win situation when you’re getting plenty of excess Energy. 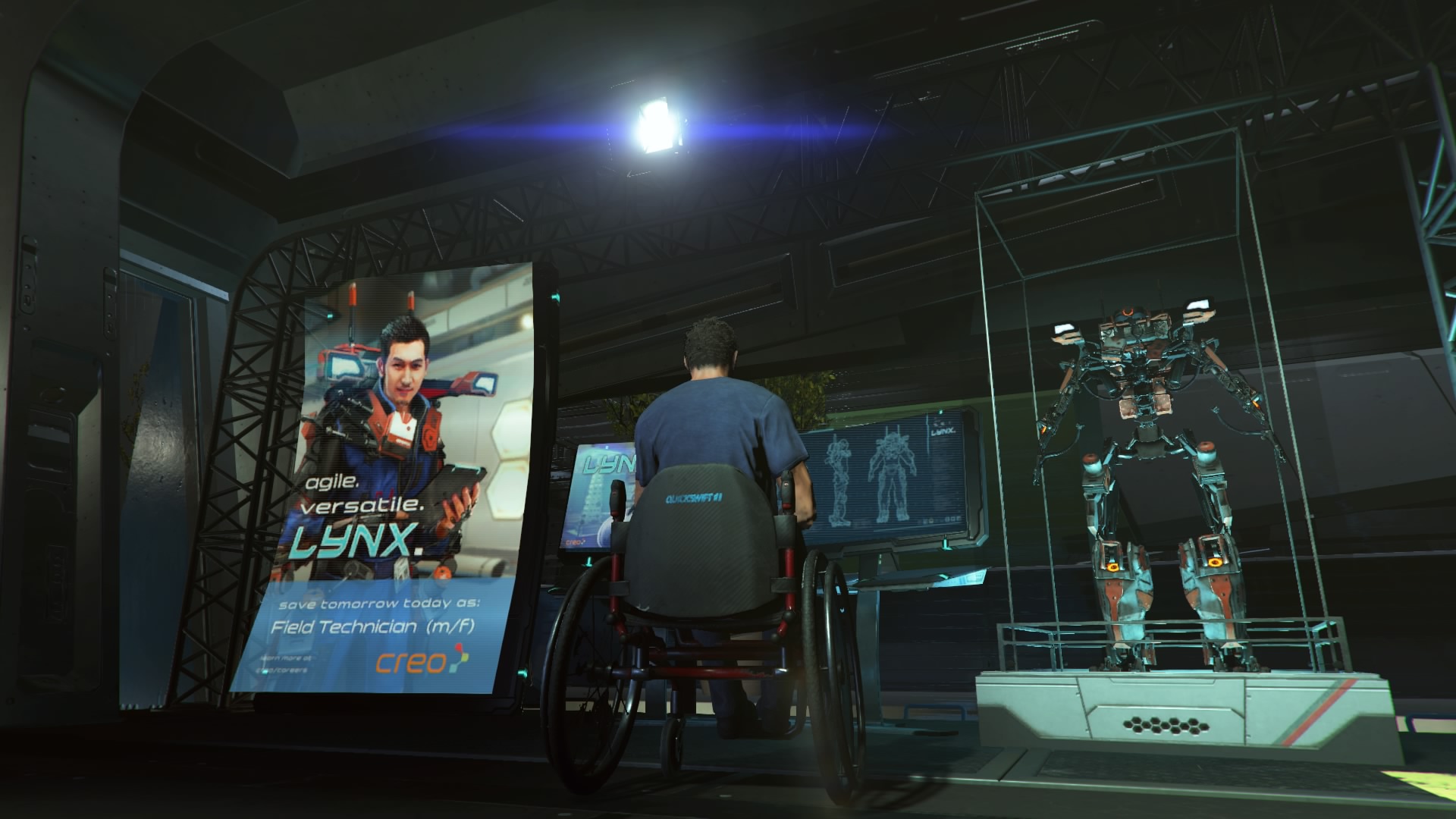 Tech Scrap isn’t your only resource in The Surge — you’ll need crafting materials, too. Weapons unlock instantly when they’re obtained, but armor (Gear) parts have to be constructed, and there’s never enough materials to go around.

It’s also important to know that Rank 1 crafting materials stay useful throughout the entire game. You’ll need them, even late in the story, in the final areas, just to unlock the schematics you need.

It looks tempting to spend your excess materials on all the junk you don’t have. Don’t fall into that trap! It’s more important to save it — that way you’ll be able to upgrade (or craft) whatever you need without constantly forcing Warren to backtrack to beginner areas.

Got your own tips and tricks for The Surge? Let us know in the comments!