Earlier, we looked at eight of the absolute worst cards of Hearthstone‘s new Journey to Un’Goro expansion. Now, we’re doing the opposite, and having a look at some of the best cards. These are the cards that will define the meta of the game in the coming months, in the way that Patches The Pirate, Dr. Boom did in prior expansions.

Let’s start with the best of the bunch: 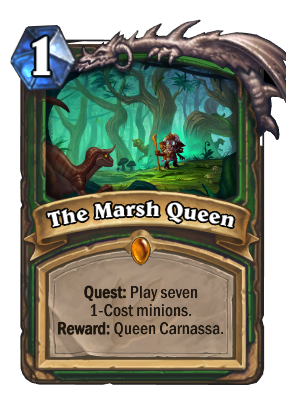 The Hunter Quest legendary: The Marsh Queen, tasks players with playing seven one cost minions, and rewards them with a five mana 8/8. That alone would make it a pretty damn good card, but the 8/8 then shuffles fifteen 1 mana 3/2’s into your deck with the battlecry “draw a card”. That’s absolutely insane. Coupled with stuff like Trunda Rhino, you can have a full board of 3/2 charges in one turn. With the new Dinomancy card that changes the Hunter hero power to “give a beast +2/+2”, you can get a three mana 5/4 every single turn.

Many pro streamers have already called this card broken. Lifecoach reportedly told Blizzard on an special invite-only tour, not to print this card because it would destroy the meta if they did, and make Quest Hunter the only deck worth playing. If you only craft one legendary in Journey to Un’Goro, craft this one! 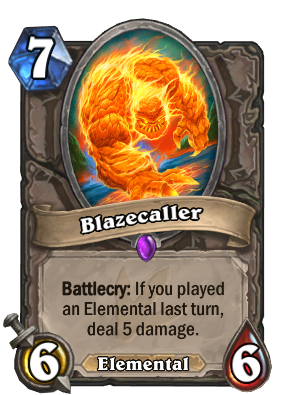 Firelands Portal is pretty great, but the fact that the minion summoned is random does detract from it a bit. There’s a chance you’ll get a poorly-statted minion like Doppelgangster. Blazecaller fixes that by essentially having the effect of Firelands Portal, but consistently summoning a 6/6 minion. Yes, there is the drawback of having to have played an Elemental the previous turn, but in Elemental-heavy Mage and Shaman decks, that’s not going to be a problem at all. 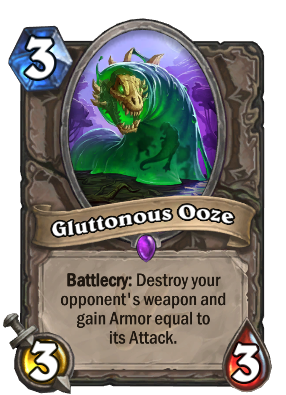 At some point in the development of this expansion, Blizzard realized they had made a huge mistake with Pirates in Mean Streets of Gadgetzan. Even after nerfs to Small-Time Buccaneer, Pirate Warrior remains one of the most consistently good decks in the game. So, in order to rectify that mistake, we’ve been given not one, but two tech choices against the dreaded deck.

Golakka Crawler is the much more situational card of the two, and will probably only see play as an anti-Pirate card if Pirates remain very heavy in the meta. Ironically, it can also be a good card for a Pirate deck – you can eat your own Patches on turn 2 to make a two mana 3/4.

Gluttonous Ooze, on the other hand, is a much better counter. Against Pirate Warrior, it’s pretty much GG if you eat their upgraded Arcanite Reaper and gain 6-7 armor. It’s also a better tech choice than Golakka Crawler because it’s effective against four out of the nine classes (five if you count Jaraxxus). I expect to see it replace Acidic Swamp Ooze in most decks.

Or, if you really, really hate Pirates you can run two copies of each. 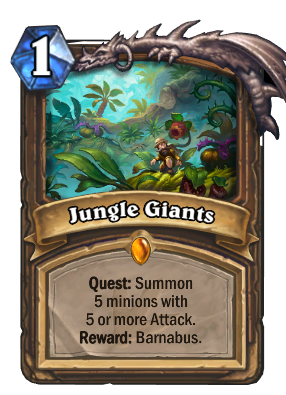 So I guess Blizzard decided that Druid dominating with the already-powerful Jade archetype wasn’t enough, and decided to print them another stupidly good card that enables an even more powerful arcehtype. Jungle Giants, the Druid Legendary Quest, tasks you with summoning five five-attack minions. The keyword here is summon, meaning cards like Menagerie Warden will count towards the quest. With Druid even getting a new three drop that has 5-attack, completing this quest should be very easy.

The reward that it gives you, is absolutely bonkers. Another five mana 8/8, this time with the effect of making all of your minions cost zero. Damn. 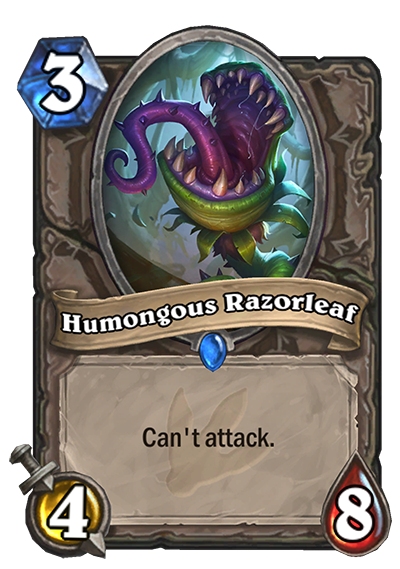 Okay, I have to admit, this one is a little bit more of a personal preference. Humongous Razorleaf makes my list because it singlehandedly allows the return of my favorite deck archetype: Handlock! Warlock hasn’t really had much to support the Handlock archetype ever since the Molten Giant nerf, so seeing a 3 mana 4/8 with the “can’t attack” text makes me giddy. Coupled with cards like Sunfury Protector, Defender of Argus, and Faceless Shambler, it really brings things back for the good old Handlock. Rejoice! 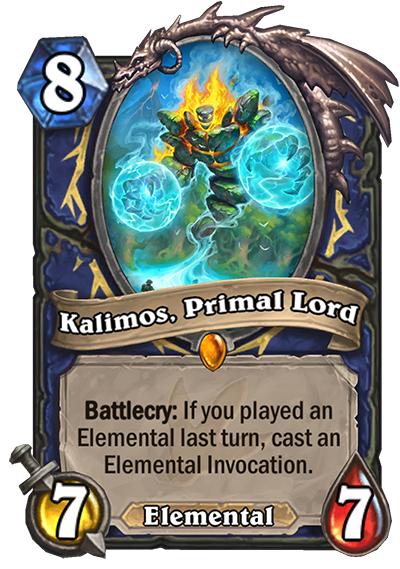 Shaman has been hitting face for so long that it’s hard to remember that once upon a time, before the likes of Tunnel Trogg and Totem Golem, it was a control deck. Kalimos, Primal Lord, along with all of the stellar Elemental cards revealed for the set, bring that archetype back. An eight mana 7/7 is already preeeeety good, but the effect that Kalimos has, and more so, the ability to choose said effect, is what makes it so powerful.

Choice is a very powerful weapon in Hearthstone, as we saw with the discover mechanic. The only problem with discover is that it isn’t consistent. Kalimos, however, will consistently give players the same four choices. Invocation of Air is a great board clear, giving you almost as much power as a Flamestrike. Invocation of Earth is a great way to fill up your board, essentially making the card a slightly cheaper, slightly worse Onyxia. Invocation of Water is a stupid good heal that will make aggro decks rage. Invocation of Fire seems to be the only really weak effect, but i guess if you need just a little bit more burst to finish off your opponent it can be good. 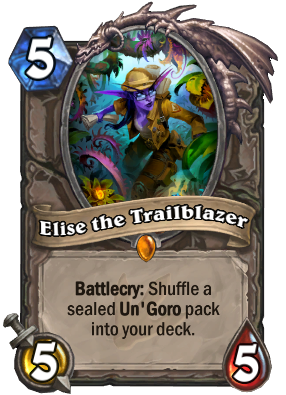 Elise is back and in a big way! The original Elise card replaced all of your cards with legendaries, giving those fatigue-reaching control decks a way to refresh their hands with some more usable, powerful cards. Elise The Trailblazer is another card for control decks, giving players a way to refill their hands when they are running low on gas.

A five mana 5/5 isn’t super great of a statline, but it’s also not awful and should trade fairly well. The pack that is shuffled into your deck gives you five random cards, with at least one guaranteed epic, and more often than not, a legendary. It also only costs two mana, which is huge considering a similar card, Cabalist’s Tome, only gives you three cards and costs five mana. Card advantage is a huge deal in Hearthstone, and Elise The Trailblazer is the single biggest swing-card in that regard. 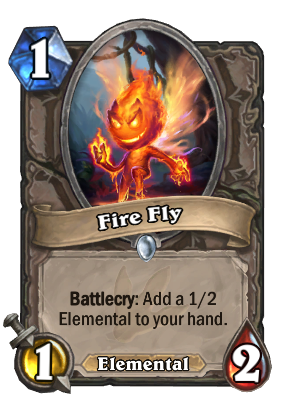 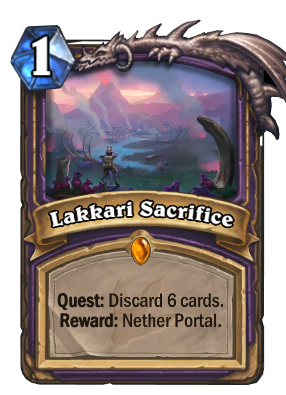 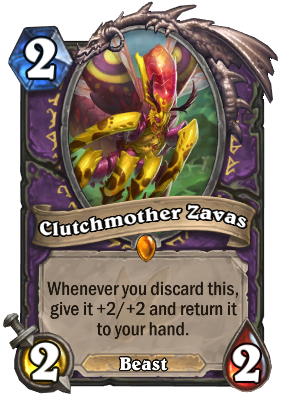 While I’m not a huge fan of the Discardlock archetype, Blizzard is really, really forcing it by having both of the Warlock legendaries for Un’Goro revolve around the mechanic. The two cards really do go hand-in-hand, so they are my final two meta-defining cards.

Lakkari Sacrifice is another quest that’s fairly easy to accomplish, and has a stupidly good reward. Discarding six cards is easier than ever with new cards like Lakkari Felhound, and the reward is a permanent portal that summons two 3/2’s every single turn. Even Jade decks would struggle to keep up with that kind of control.

But what makes Lakkari Sacrifice and the discard mechanic so good is Clutchmother Zavas. Usually, discarding a card is a detriment, so cards that force you to discard a card usually have a much more pwerful effect than their mana cost (see Doomguard). Zavas actually turns that detriment into a positive. Not only does “discarding” the card count as a discard for the purpose of the Quest (and Malchezaar’s Imp), but it also buffs up the creature. Getting a massive 8/8 Zavas shouldn’t really be a hard thing to do, on top of completing the Quest.

So there you have it, these are the cards that we, and a lot of other professional streamers, think will be the ones you’ll be seeing the most in Journey to Un’Goro, which launches today! Did we miss any? Are there any broken, overpowered cards you’d rather see on this list? Let us know in the comments.