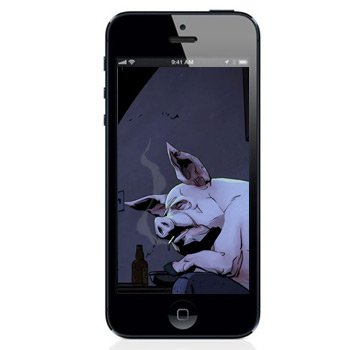 Telltale Games has announced that its latest episodic adventure series, The Wolf Among Us, will be heading to the PlayStation Vita and iOS devices this fall.

When Telltale Games announced that The Walking Dead would be released on Apple’s iDevices, mobile gamers across the planet exchanged a collective high five. The App Store is full of wonderful games, but very few console-centric developers choose to send their games into the mobile market, so it can be hard for serious gamers to get their fix. Well get your high-fiving hands ready, mobile gamers. Telltale has announced that its latest title, The Wolf Among Us, will also be heading to iDevices and the PlayStation Vita this fall.

Telltale’s announcement wasn’t specific about when the title would actually be released, but we do know that each episode will cost $4.99 when purchased individually or $14.99 for the entire season.

The Wolf Among Us is based on a comic book called Fables by Bill Willingham. Fables follows the antics of several fairy tale characters who find themselves transplanted into New York City, where they attempt to blend in with society.

So far, Telltale has only released one of the five episodes from the game’s campaign, but the critical response has been positive. It’ll be months before we know if it can live up to the expectations set by The Walking Dead, but even if it does’t, there aren’t many good adventure games on the market. So, it’s probably worth a look.

If you don’t believe me, check out our review.

Gone Home Was Once an Amnesia: The Dark Descent Mod