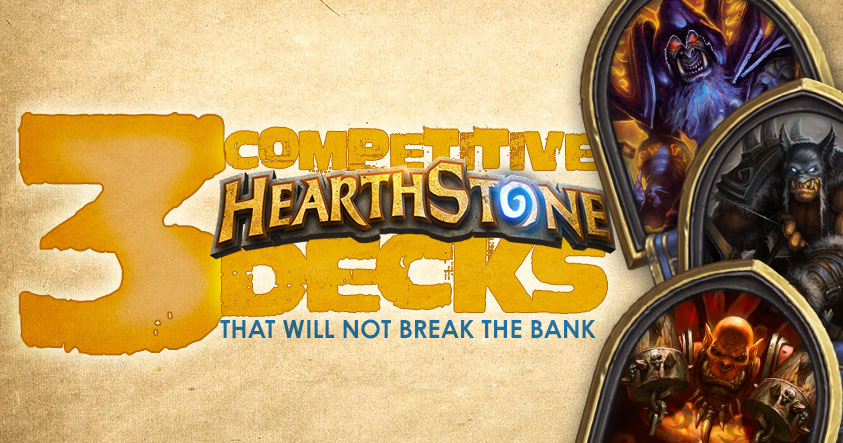 So, you’re looking to get into this Hearthstone craze that everyone is talking about, or you’ve been playing it here and there and are ready to graduate from the terrible starter decks that Blizzard puts you on. But, you don’t have hundreds of dollars to spend on dozens of additional packs hoping that RNGesus will bless you with Dr. Boom, Sylvanas Windrunner, and all the other big legendary drops the pros use. Fret not, my friend, for there are plenty of “budget” decks that can climb the ladder just as well as all of those expensive legendary-laden monsters. Today we are gonna have a look at three such decks, which are all, in theory, capable of reaching the “legend” rank in ranked play.

Just a quick note before we begin: while the “dust” cost (Hearthstone’s crafting material, which is obtained from disenchanting cards) of these decks is quite low, most of them assume that you own both the Naxxramas and Blackrock Mountain single-player adventures. At $25 a piece, these adventures are easily the best value-for-money in the game, as they guarantee you a suite of cards which are staples in many decks, rather than having to get lucky with booster packs.

Let’s start with the most infamous, original “cheap deck” – the Face Hunter. A word of warning: people will hate you for playing this deck. Face Hunter, as its name suggests, focuses on dealing as much damage to the “face” (IE: your opponent’s direct health pool) as possible, often ignoring enemy minions unless it is literally forced to attack them. It’s very easy to build, very easy to play, and incredibly effective.

Nothing entices rage more than having your intricate mill Rogue deck stuffed with legendaries that cost you hundreds of dollars to craft, beaten mercilessly by a deck whose rarest card is “Arcane Golem”.

As a Face Hunter, you want to be as mana-efficient as possible, hitting fast and hard with cheap, effective minions, and using your hero power on pretty much every turn to really give your opponent that sense of urgency. Some great combos to help you achieve this include Wolfrider/Arcane Golem + Abusive Sergeant, Knife Juggler + Unleash The Hounds, and Eaglehorn Bow + Mad Scientist. You’ll want to hold onto your Ironbeak Owls to silence taunts, so you can continue to ignore minions and hit face. You really want to get both of your Explosive Traps via your Mad Scientists, so be sure to mulligan (discard them and replace them with new cards at the start of the game) when you get them.

Spells like Kill Command should be kept for finishers and taunts, and while Quick Shot is obviously best used on an empty hand, if you need the extra three points of damage don’t be afraid to use it, as it is still quite good value even without its secondary effect.

Your biggest weakness is mid-range control decks that can tech against your early aggression and draw the game out. Essentially, you either have an unbeatable advantage by turn five…or you lose, as once your hand is empty and 5-mana+ minions are being played, it’s incredibly hard to eke out a victory.

For the Rich: So lets say you do have some extra dust and want to invest a bit more money into this deck to make it a wee bit better. Leeroy Jenkins is probably the best Legendary to put in, as his powerful attack and charge makes for a good finisher. Snake Trap is also a pretty solid addition, as it gives you three free 1/1 bodies and can throw off an opponent who is expecting explosive trap. Feel free to swap out one of your Leper Gnomes, or Ironbeak Owls for either of these cards.

For the Poor: If you’re feeling especially strapped for cash, you can probably skip Blackrock Mountain for this deck. It uses only two cards from the adventure (Quick Shot) which can be replaced with a second Worgen Infiltrator and a second Glaivezooka. You can even substitute the Naxx cards (Spectral Creeper and Mad Scientist) with a couple of Dire Wolf Alphas and some Gilbin Stalkers if you wanna be really cheap.

Classic Zoolock was an extremely powerful, cheap deck that fell to the wayside when the meta shifted. Now, it’s back on the heels of Imp Gang Boss – a new Warlock specific card from Blackrock Mountain that synergizes perfectly with the deck. The Zoolock, just like the Face Hunter, wants to win fast, but unlike the Face Hunter, who hunts face, the Zoolock wants to win by maintaining board control. He floods his own board with cheap, efficient minions making a “zoo” that, with the help of buff cards, can make trades with more expensive enemy minions.

When playing Zoolock, you’ll want to get your 1-drops – Flame Imp, Leper Gnome and Clockwork Gnome – on the board as soon as possible, so always try to mulligan for them. Hard-to-remove cards such as Spectral Creeper and Imp Gang Boss should be played on curve (as soon as you have enough mana for them), and you should always try and clear the enemy board before going for the face.

Nerubian Egg is a powerful card that can either be a deterrent to board clear (such as Consecration), or be buffed with an Abusive Sergeant/Dark Iron Dwarf to make very favorable trades. Loatheb is your mid-game insurance that your board won’t just get Flamestrike’d away, and Doomguard (best used on an empty hand) is your finisher. You should try to hero power whenever you can – your cards are cheap and you’ll want to get as many of them in your hand as possible.

Combos to look out for include Knife Juggler + Implosion, Defender of Argus + Imp Gang Boss/Nerubian Egg, and Power Overwhelming + Spectral Creeper/Nerubian Egg. Try to hold onto any Dire Wolves until you have two minions on the board that can attack, or you have a taunt to protect it. Take control of the board early, keep it that way for the whole game, and you’ll eventually overwhelm your opponent.

For the Rich: Dr. Boom fits into this deck pretty well, as unlike Face Hunter you will be playing games that last until turn 7. If you can play him on curve and already have a few minions on board, it will make things extremely difficult for your opponent to deal with, even with a Big Game Hunter. Substitute one of your Dark Iron Dwarves for him. Leeroy Jenkins is also a good addition, and can replace one of your Doomguards.

For the Poor: While Imp Gang Boss certainly makes this deck a lot more powerful, if you don’t want to shell out for BRM, you can replace it with 2 Harvest Golems. Naxx is absolutely crucial for this deck, however, as Nerubian Egg and Spectral Creeper are two of your best cards.

Patron Warrior is easily the cheapest deck in this guide, but don’t let that fool you, as it is actually the most difficult one to play. While Face Hunter is a rush deck, and Zoolock is a board control deck, Patron Warrior is what is known as a combo deck. Yes, Zoolock and Face Hunter do have combos that help them out, but for Patron Warrior, the combos are the deck, and successfully pulling off your combo is the difference between winning and losing.

The problem is that your combos require quite a lot of mana, meaning you will have to spend the first half of the game on the back foot, biding for the right time to play your cards. Cards like Fiery War Axe and Dread Corsair are best to mulligan for, as they will be instrumental in making sure your opponent doesn’t overwhelm you in the early game, and small combos like Acolyte of Pain + Cruel Taskmaster will help in building up your hand. Playing Emperor Thaurissan on curve – even if he gets taken out straight away – is very important, especially if you have all of your combo cards in hand.

As for your combo, like the name suggests, this deck is all about the Grim Patron. You’ll notice that there are quite a few cards that deal 1 damage to all minions (Unstable Ghoul, Whirlwind, Death’s Bite). Essentially, you want to use this chip damage to spawn multiple Grim Patrons, filling your board and providing your opponent with a threat that he simply cannot deal with. Your absolute ideal combo is thus: Start turn with Death’s Bite on 1 durability – summon Warsong Commander, summon Grim Patron, play Commanding Shout, Death’s Bite an enemy, play Whirlwind. You should now have four Grim Patrons on the board, which thanks to Warsong Commander, can instantly attack and can’t die due to Commanding Shout.

This combo is even better if you happen to have a Frothing Berserker on board, as it will buff him to such ridiculous damage that you’ll probably be able to just one-shot your opponent after your Patrons have cleared the board.

Of course, don’t just hold out for the “perfect” combo. If you need to play smaller combos (Grim Patron + Slam, Warsong Commander + Frothing Berserker + Whirlwind) to clear the board you should do so, as even a perfect combo won’t save you from overwhelming board presence.

For the Rich: Grommash Hellscream is a perfect addition as a late-game finisher. You have so much chip damage in this deck that chances are you’ll be able to play him and enrage him on the same turn, giving you an instant 10 damage. Take out one of your Gnomish Inventors to put him in.

For the Poor: Unfortunately, there is very little room for substitution in this deck. The whole crux of it revolves around Blackrock Mountain’s Grim Patrons, and Emperor Thaurissan is just too good of a card to pass up. Similarly, Naxxramas’ Death’s Bite and Unstable Ghoul are necessary to proc your Patrons and Berserkers. If you wanna play Patron Warrior, I’m afraid you’re just gonna have to pony up for both the BRM and Naxx adventures.

So there you go, three decks that are comparatively cheap and can all (theoretically) reach legend. If you’ve got your own deck ideas, or suggestions for how to improve these three, feel free to list them in the comments below.