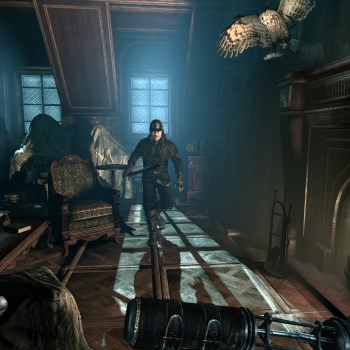 Thief Producer Stephane Roy says the new technology of the PlayStation 4 allows the game to achieve a level of immersion that’s simply not possible on the PS3.

Thief is being developed for a number of different platforms, among them the PlayStation 3 and PlayStation 4, and while all involved will no doubt tell you that both versions are excellent, it will likely come as no surprise that the PS4 will be, well, better.

“It’s very important for us to immerse players in our universe. We want to make sure players really feel like they’re Garrett, that they’re part of the environment,” Roy said in a PlayStation Blog interview. “So on our side the immersion is key. And honestly, with the PS4, it’s just amazing to see how far we can push this immersion.”

He cited “an AI component, an audio component [and] an art component” as necessary to the heightened experience, and noted that the DualShock 4 controller offers new technologies that will be put to use in the game as well. “For the DualShock 4, we use the light bar to reflect the light gem in the in-game UI, which indicates if Garrett is in the shadows or not. It creates a nice feeling when you play in the dark to see it illuminate or darken as you move through the environment,” he said. “Additionally, the touch pad allows for better menu navigation and makes for a more intuitive way to perform various actions, like navigating the map or selecting weapons.”

Players will also be able to use the “share” button to show off their solutions to the problems that confront a thief as he plies his trade, while the improved motion controls lets players adjust their bow aim with a “really impressive” level of accuracy. And while it’s not unique to the PlayStation releases, the third-person view option from Thief 3 is out.

“Thief is primarily a first-person game. We worked a lot to create a really immersive environment, and integrate body awareness that really makes you feel like you are standing there in the shadows, about to steal that golden cup,” Roy said. “To achieve this level of quality, we needed to focus on one view for those sequences. We still use some third-person camera, but only in specific moments when it fits the most, like a navigation segment or performing takedowns.”