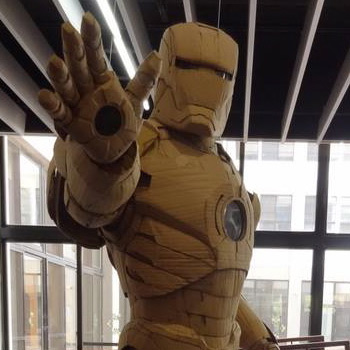 Cardboard is a commonly used material for budget-minded cosplayers, but Kai-Xiang Xhong, an art student at the Stan Winston School of Character Arts in Taiwan, has taken cardboard to a whole new level. His newly minted Iron Man suit will remind you that your handmade Halloween costume sucked.

Xhong spent nearly a year completing his Iron Man suit, working only in his free time.
Every single notch and corner has been intricately molded into a life-sized sculpture that would make Robert Downey Jr. proud.

“For my cardboard Iron Man suit, I used pepakura technique,” he explained. “But I did not add any special color on the surface. Keeping the cardboard color and texture was deliberate. That’s my style.”

Pepakura, for those of you who may not be paper crafting experts, is a folding technique that allows heavy-gauged paper to be fashioned into a three dimensional model. The finished pieces often have an angular, polygonal look, but some of Xhong’s sculptures are so lifelike, that they’ve been mistaken for real animals.

If you don’t believe me, check out the gallery below.