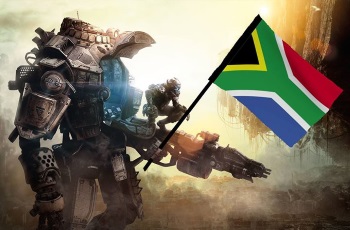 Gamers in South Africa are calling on Respawn and EA to release Titanfall in their country, saying that if they want to play with a bad ping, they should have the option to do so.

Update: Build Our Titans ZA has confirmed that even though Titanfall isn’t being released in South Africa, South Africans can still play it by getting a non-region-locked key for the game and redeeming it through Origin. Both Kinguin.net and Evopoints.co.za are reportedly offering them.

“Although this is a work around it is a VERY simple one,” the group wrote on the Build Our Titans ZA Facebook page. “We would suggest you take all that pent up frustration over the last couple of days and unleash it on some unsuspecting EU pilots!”

It added that it will continue to push EA and Respawn to disclose the real reasons for the release cancellation, but for all practical purposes considers the problem solved. “Our goal was to give ZA pilots the CHOICE to play Titanfall,” it continued. “It seems that choice is available (through no actions of our own) and every ZA pilot who wants to play the game now, can do so.”

South African gamers received a nasty surprise last week when Electronic Arts announced at the last minute that Titanfall would not be released in their country. The problem, according to a message on Origin, is simply one of performance: Titanfall relies on Microsoft Azure servers and there are none close enough to South Africa to provide a decent ping and thus a proper experience. Respawn founder Vince Zampella confirmed the cancellation on Twitter, writing that he doesn’t want to “sell you something that isn’t great.”

It would seem that quite a number of gamers in South Africa would appreciate the opportunity to buy something that isn’t great, however. A petition launched shortly after the announcement by a group calling itself Build Our Titans ZA has already attracted nearly 1500 signatures, not an enormous number in and of itself but pretty impressive considering that it’s coming from such a small slice of the gamer pie.

The petition notes the lack of Azure servers in South Africa but says the game ran well and “was still amazing even at the latency disadvantage,” which left the nation’s players dealing with pings of 180 ms or greater when connected to European servers. And while that number approaches the sort of lag you’d associate with a dialup connection, the petition says the final choice should be left up to the players.

“We have been putting up with bad latencies to EU and US for many years in order to enjoy our favourite titles in a multiplayer environment. Please don’t take away what might be one of the best FPS titles of the decade, on the pretense that we would not enjoy the experience with a higher latency,” the petition states. “We humbly petition Electronic Arts and Respawn Entertainment to make the game available to South Africans on release date, and give us the CHOICE to play Titanfall.”

The petition’s authors acknowledged that while the response to the game among South Africans was “almost universally positive,” its relatively poor performance might be enough to make Electronic Arts shy away, especially after the messes of SimCity and Battlefield 4. There’s also reportedly speculation that potential legal complaints based on the country’s consumer protection laws may have spurred the last-minute cancellation.

“I think South Africa is too small a gaming market for EA and Respawn to bother with. Given EA’s recent issues with releasing unpolished games (or games with a bad online experiences) they might have decided to avoid South Africa altogether given the fact that our latency to EU servers was 200+,” a Build Our Titans ZA rep said. “If you throw in any potential legal troubles that might stem from that experience then their decision might make sense. Compare this to Australia and India that have large thriving gaming communities… it wouldn’t make sense to pull out from these territories as you’re just throwing away revenue.”

Australia, like South Africa, has no native Azure servers, forcing players there to rely on servers located in Singapore. Even so, the Titanfall launch in that country is proceeding on schedule.

EA said in response to inquiries that it has nothing more to say on the matter than the statement it released last week. “After conducting recent online tests for Titanfall, we found that the performance rates in South Africa were not as high as we need to guarantee a great experience, so we have decided not to release Titanfall there at this time,” it said. “We understand this is a disappointment for local fans and will keep them posted on any future plans regarding the release of Titanfall in South Africa.”