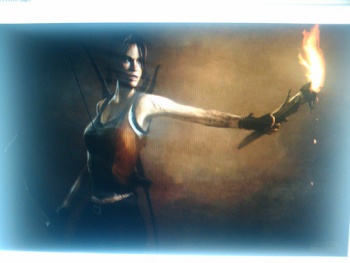 Leaked concept art suggests that Eidos are reworking one of their most popular franchises.

Lara Croft is one of the most iconic figures in gaming, being one of the few videogame characters to be recognisable to an audience beyond the game-playing demographic. But Lara’s popularity has waned somewhat in recent years, and so new owners Square-Enix appear to be taking the character back to basics.

Except you haven’t seen basics like these, not in a Tomb Raider game at least. If leaked materials are to be believed, Lara’s back story is being re-written from the ground up, and the next Tomb Raider will eschew the linear locales of previous titles, in favour of an open world, sandbox style environment.

The game will supposedly have a focus on survival and have a retooled combat system with more emphasis on melee. There’s going to be an bow and arrow in there somewhere as well, if the picture is to be belived.

This is all just rumour of course, but it’s worth mentioning that the site that originally linked the images were contacted by Eidos lawyers and asked to remove them. That might not mean anything, or it might mean everything.

It’s a Kind of Magic