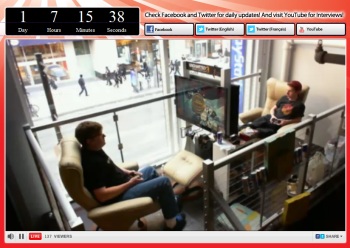 A couple of guys from Toronto are trying to set a new world record for the longest continuous videogame session ever.

“Toronto the Good” is a fine city, one of the finest in the world, and the pride of Canadians from coast to coast. It’s host to one of the most respected teams in the National Hockey League, a beacon of good governance and soon, if a couple of intrepid young lads named Christopher Gloyd and Timothy Bell can keep their wits about them, will be home to the holders of the Guinness World Record for the longest continuous videogaming session ever.

And how long is the longest videogaming session ever? 109 freakin’ hours, which translates into more than four-and-a-half days of solid gaming. The pair were up to about 31 hours of Resistance 1 and 2 at last check, which means that around lunchtime tomorrow they’ll have also passed the record for the longest continuous FPS session, which stands at little over 51 hours.

The “action” is taking place in the PlayStation lounge of EB Games’ flagship store in Toronto, where the whole thing is being filmed for verification by the Guinness people and also livestreamed at ebgames.ca. The clock currently stands at a little over 31 hours and at this point they appear a little bored but not actually delirious or functionally impaired. We’ll see if that’s still the case on Thursday; this gaming marathon began at 10 am on March 12 and, barring wuss-outs or spontaneous unconsciousness, will continue until noon on March 16.

Good luck, chaps – The Center of the Universe is counting on you!

How to Survive an Alien Invasion

Capcom “Cautiously Optimistic” That Its Typo Troubles Are Over