The 80s Transformers cartoon manages to succeed in spite of itself.

On Friday, audiences around the world will pack movie theaters to watch what is, effectively, a commercial. Granted, the line between what is and isn’t an advertisement has blurred considerably in recent years as more and more features are adaptations of other media properties. Iis Iron Man 3 “promoting” the Iron Man comics, or is it the other way around? And if it’s both, does it at that point become neither?). But the case of Transformers: Age of Extinction would seem to be pretty clear cut: It’s an advertisement for a line of Hasbro robot toys, the most recent evolution of an entire franchise of narrative ads for the same brand of toys launched alongside countless others when the Reagan Administration deregulated longstanding U.S. laws against producing marketing in the guise of children’s entertainment.

To be sure, the Transformers movies aren’t regarded as being particularly good. Longtime fans of the characters railed against their “butchering” in the original film at a still-legendary pitch, and the disastrously bad (largely a casualty of a Hollywood writer’s strike) sequel spurred mainstream critics (who’d mainly dismissed the original with a “well, what’d you expect?” shrug) to join in on the bashfest — which by then had grown to encompass a more general backlash against the action aesthetic of Michael Bay. And while most agreed that the third installment was some sort of improvement, a strong vein of dismissal and disdain continued to permeate.

It’s easy to see why even the most forgiving film/TV aficionados would prefer to write Transformers off as worthless junk — particularly when Michael Bay has made it so easy to do so for at least three feature films (as of this writing, I’ve not seen the fourth.) People who regard a medium as art — or at least capable of producing art — even when it’s also a business, tend to draw rigid boundaries in every conceivable way they can to segregate that which is “only” commercial, even when it doesn’t make sense. That’s how you get to the place where especially well-directed music videos (aka advertisements for singles and albums) get to also be short-films while equally well-directed ads for everything else are still just ads.

This has always felt a little bit arbitrary to me, though I’d be the first to acknowledge that that might have something to do with having grown up right in the middle of it — born in 1981, I’ve never known a world where the bulk of kid’s TV wasn’t trying to sell its audience something. Even as I recognized when I was being spoken to as a consumer moreso than a viewer, the Transformers cartoon nudging me to buy action figures didn’t seem all that dissimilar from LeVar burton nudging me to read books.

Still, where I come down is that 99% of the time the “intent” behind the making of a TV series means very little compared to whether or not it “works” narratively, artistically, etc. The implicit “catch” to using a series to move a product line is that the series has to actually draw and maintain an audience for that to work. And that Transformers is the sole member of the 80s toy-toon club to have remained a thriving franchise as opposed to a memetic joke (Masters of The Universe) or a series of diminishing returns (G.I. Joe) would suggest that the original 80s series that started the ball rolling (Generation One or G1 in fandom parlance) must have been working on a significantly higher level than its immediate peers.

In my estimation? It was. Mostly.

Make no mistake: For the most part Transformers was as dumb (and cheap, and tacky) as the rest of its ilk. Characters and animation are both wildly inconsistent, dialogue is 90% perfunctory and despite the many glowing documentaries produced over the years bending over backwards to highlight the positives of the production there’s very little to suggest the folks in charge had any real goal beyond delivering the “advertainment” Hasbro had contracted them for. 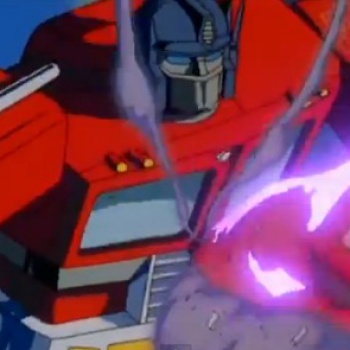 But in sitting down for a re-watch, you can see pretty quickly why the series caught on the way that it did. It’s a sort of accidental alchemy; a fusion of positive elements that coalesced just often enough to overwhelm the goofy, junky rest of it. There’s a hard to define “it” that makes something like this endearing in spite of itself, and while for the longest time I was willing to chalk it up to mere nostalgia one thing I’ve realized in revisiting Transformers over the last few years is how little of it I had actually seen — a handful of episodes (and not great ones, for the most part) and the movie — to the point of being able to form memories. The fact is, the series worked… even if it seemed to do so often by accident.

For example, taken separately anything related to the characters looks like a mess: Their personalities are thinly sketched (usually a stock-type vaguely associated with their vehicle mode and a cartoony/affected voice) and their actual designs are a clunky mix of boxy robot shapes and floppy animated pantomime. They don’t so much “develop” as eventually find a function within the narrative and perform it until their toy stopped selling. And yet… there’s an endearing quality to them when you put all that together with the spectacle of a bunch of robots made out of car parts having (budget saving) stationary conversations about battle strategy and the nature of good and evil.

The animation and artwork, particularly early on, were spotty as hell — combining the worst elements of low frame-count Anime with Western cartoons’ tendency toward rubbery weightlessness. But the characters’ stiff mechanical designs actually lent themselves to the limited animation, and the action beats have a weirdly dynamic quality that wasn’t quite like anything else happening in cartoons at the time. It also helps, it must be said, that 80s broadcast-standards holding that more violence could be done to robots than humans/animals allowed Transformers to boast easily the most viscerally-exciting action scenes of the adver-toon pack: Every episode seems to include at least one scene where the Autobots and Decepticons unload a massive volley of laser fire on one another until everyone is close enough to either start punching or switching to car-mode to crash into each other.

The series’ voice cast is, of course, famous in its own right — and it also featured that signature sound design (whoever worked out the “transforming sound” probably did more to cement the franchise in the minds of a generation than anybody) plus Johnny Douglas and Robert J. Walsh’s iconic musical score. But, honestly… and you can laugh this off if you like, I think the main reason Transformers lodged itself so firmly in pop-culture’s craw was that it told good stories. 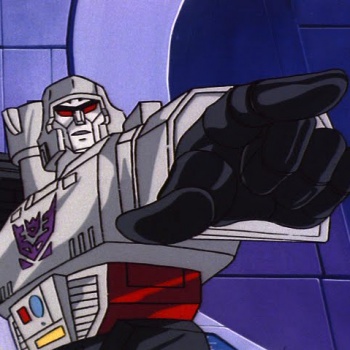 Yeah, yeah. Cue record-skipping sound-effect (does that gag even have real meaning to anyone under 30?). Look: I’m not going to try and claim that Transformers had “good scripts.” It really didn’t, and even if any of its scripts started-out objectively “good” they wouldn’t have arrived onscreen as such after the production-speed and “just get the damn lines out!” voice-recordings got through with them.

But what it did have was good stories. Ridiculous, preposterous stories, granted… but good versions thereof. The basic backstory (previously established in comic books) setting up the gimmick i.e. the robots being a pair of warring alien factions who turn into Earth vehicles for disguise obviously exists to justify the gimmick of the toys, but it’s also a solid pulp-scifi premise one could easily imagine sharing space in the 50s genre magazines alongside the early works of Ellison or Asimov. “Pulp” is about the level that Transformers’ storytelling would occupy for most of its run, but it occupied it admirably; mixing basic good/evil battle romps with “big idea” scifi digressions about other bio-mechanical civilizations and the bizarre mythos of the Transformers themselves.

Supposedly, the newest Transformers movie is to be a more “serious” take on the material from the previous trilogy, jettisoning the youth-targeted human co-stars and military hero-worship from the first three in favor of a new setup involving a down-on-his-luck dad and government conspiracy. Whether this is actually the case remains to be seen. If so, it’ll be right in line with the way this whole franchise started — playing an innately silly premise (mostly) serious is almost always going to be more amusing than just going for the jokes, and a (perhaps accidental) understanding of just that has a lot to do with why people are still talking about Transformers today.