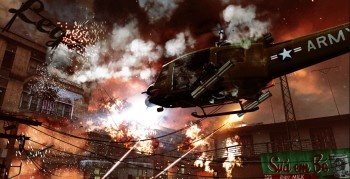 Josh Olin of Treyarch says the mess at Infinity Ward won’t be a distraction, which is probably a good thing since one industry analyst has predicted that the upcoming Call of Duty: Black Ops could sell over ten million units in its first year of release.

There’s been a lot of fallout from the March blow up at Infinity Ward, but one group of people it’s apparently not affecting too much is the gang at fellow Call of Duty developer Treyarch. The studio has managed to avoid becoming embroiled in the mess, staying focused on the development of the latest Call of Duty release, Black Ops, instead.

“The situation at Infinity Ward is unfortunate. It’s just not something that we want to let distract us or that we really think about too much,” Olin said in an interview with MCV. “We’re still focused on our primary charge – to make the best game we possible can – so we’re keeping our heads down and staying focused.”

It’s a smart approach to take. The implosion of Infinity Ward has left the weight of the Call of Duty franchise on Treyarch’s shoulders and expectations are running high. The game is already a top-ten pre-order item at both Amazon and GameStop, and industry analyst Doug Creutz of Cowen and Co. predicts that the game could sell 10.7 million units in its first year of release.

“We believe the title is headed for a better comparison versus last year’s Modern Warfare 2 than we had originally assumed,” Creutz said. “We believe our revised estimate could still prove conservative, and note that a strong performance by the Treyarch-developed Black Ops would help combat the notion that the departure of key Infinity Ward talent could permanently impair the Call of Duty franchise.”