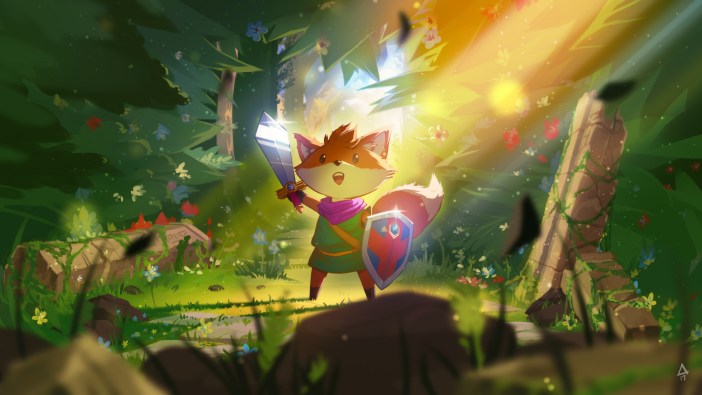 It’s hard to predict how and when nostalgia will hit hardest, but gamers tend to be particularly susceptible towards anything resembling a trip down memory lane. Whether it’s dropping 60 bucks on a slightly updated HD re-release of an old classic or remembering exchanging game discoveries and secrets on the playground, nostalgia dictates not just the gaming market, but the culture itself.

Andrew Shouldice’s Tunic does everything in its power to capitalize on that ‘80s and ‘90s hard-as-nails adventure vibe that helped create the industry in the first place. There are the overt comparisons to the Legend of Zelda series, down to the immediately recognizable green garb the vulpine hero dons. There are countless hidden and cloyingly unpredictable secrets that bring back memories of early entries in the Metroid series. And while many have compared its punishing combat and progression to FromSoftware’s games, in many ways it’s more comparable to more obtuse and engaging classic fantasy RPGs like The Immortal (for better or for worse).

And then there’s Tunic’s main mechanic for progression, the collectible manual that’s reminiscent of the colorful guide you’d find inside the box of a ‘90s game. Boasting cartoonishly wholesome renderings of the game’s little fox and offering tons of little secrets to decode, players will spend a lot of time using this instruction booklet to navigate the isometric world and find everything from hints on hidden moves, to maps, key items, and bosses.

Just like in the good old days of early gaming, Tunic makes you do your research. There are no waypoints, no chatty fairies suggesting where to go next, and not even a tutorial. There’s just the intricate manual for you to study and an entire new alphabet and language to learn. It creates that peak rush of “do it your damn self” satisfaction that gaming has strayed so far from, and let me tell you — as much as the game strives to make a beautifully nostalgic return to a bygone era of difficulty and discovery, it was absolutely lost on me. 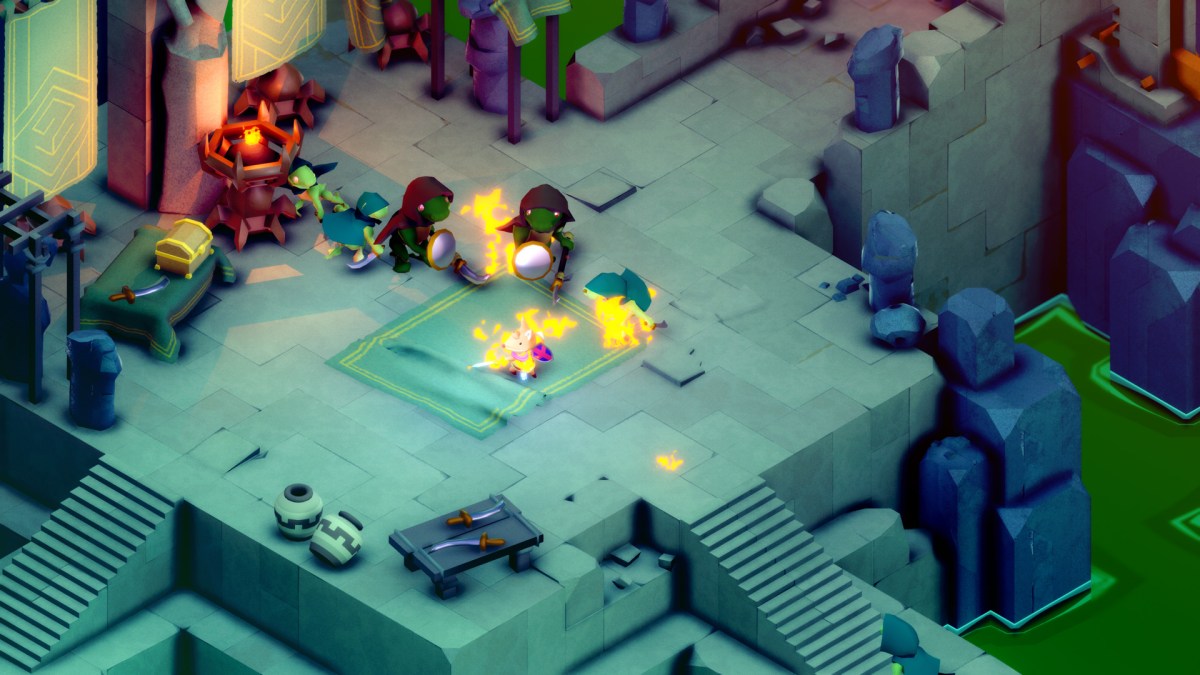 Before I detail my frustrations, I should at least clarify that I suffer from ADHD and began my gaming career with the more user-friendly Nintendo 64, so I’m well aware of Tunic’s ability to reward a tenacious gamer. But how much Tunic emphasizes its in-game manual ends up hurting its exploration.

Being a gamer with ADHD, my eyes are constantly looking for small little hints and secrets. Gaming ADHD looks like noticing a stray cluster of bananas in Donkey Kong Country just in the nick of time to leap into a bonus barrel, or having to go explore that odd patchwork of rocks in The Legend of Zelda: Breath of the Wild and then being rewarded with a Korok discovery. My ADHD also reveals itself when playing games like Into the Breach that reward rabbit-hole thinking and goofy-but-creative moves like destroying a dam to flood a subterranean bug army.

Exploring games through the ADHD lens doesn’t just mean that there’s an absolute inability to focus enough to “get gud.” If anything, it makes great game design even more memorable and engaging. And through this lens, Tunic’s cracks start to show.

During my playthrough of Tunic, I’d find myself wandering around hidden corners, rolling the control stick desperate to just find a hidden passageway that would let me progress in the game because I hadn’t found a manual page telling me the details of a secret path. I stabbed, slashed, and bombed countless statues and graves unaware that I was missing a page detailing a very simple move I could use to engage with them. And any time I was met with a language barrier for the intricate lore and story, I found myself comparing the game’s adequate environmental storytelling to that of other apocalyptic fantasy games like Journey and Abzu. And while I admittedly didn’t spend nearly enough time studying the manual, frankly that was because it felt more like cramming for a test in a class I hadn’t even taken. 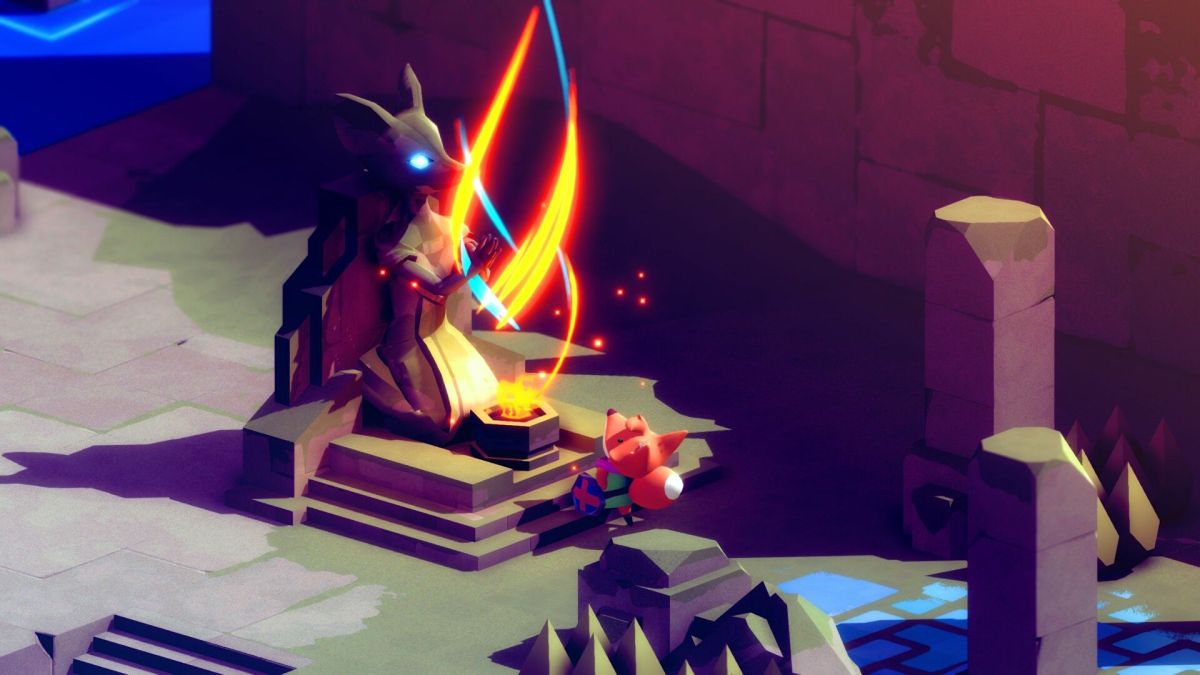 At the end of the day I often feel like I’m gaslighting myself about games like Tunic. I’ll struggle through for hours of trial and error, then get boosted by the beautiful lighting design or really engaging boss fight, and then find myself trudging around searching for another secret. I find ways to keep coming back to this game with rave reviews that evokes so many of gaming’s classic hallmarks, despite my ADHD making it often a frustrating nightmare to play.

“This game is like Zelda,” I’ll keep saying to myself. “You like Zelda!” But whether I compare it to Dark Souls, Super Metroid, or an old NES title, Tunic struggles with what so many of those games put first and foremost — design that gives the player all the tools they need to figure it out for themselves.

I reached my breaking point with Tunic after I had realized I’d missed a key item and was fighting the Boss Scavenger without having found the Gun. Annoyed at myself for misreading the map, I doubled down and fought the buff masked mole dozens of times. Unable to even get the creature to a third of his health bar, I went online to look at a more detailed guide on what to do. That’s when I found a video showing how to completely cheese the boss with the grappling hook and some creative aiming from afar.

After a whopping five-second fight, I had finally “won” and could progress. I was hit with this charming wave of nostalgia, not from anything the game had actually done, but instead remembering being on the playground as a kid and having one of my fellow third graders show me a cheat in Pokémon. It was a refreshing reminder that no matter our gaming tastes and abilities, no matter my ADHD, no matter how nostalgia is implemented in game, the best secrets in gaming aren’t the ones we find hidden in a manual, but rather the ones we share along the way.