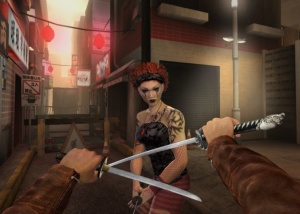 The Wii MotionPlus peripheral will be put to use in the upcoming Ubisoft title Red Steel 2.

“Red Steel 2 has been in development for many months now, and this new device will help us be even more precise in what we do with the product,” executive producer Alain Corre said about the sequel.

He said the newly announced Nintendo technology was not ready when the Red Steel (pictured) first appeared, but that the gadget’s 1:1 mapping capabilities will pave the way for greater gameplay options in the sequel.

“[O]ur game tried to grab the best out of [the Wii], and was a bit rushed to be sure to offer something in year one to Wii consumers,” Corre said.

He also offered thoughts on why many third-party publishers were flailing on the Wii, saying, “A lot of games are made in less than a year, but they’re not great products and they’re not selling at all. So it takes some time to develop good games.”