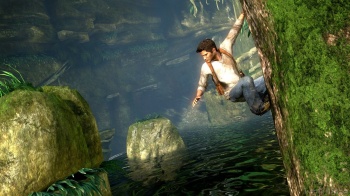 Director David O. Russell says that fans of the Uncharted games are just going to have to trust him.

Russell, the Academy Award-nominated filmmaker who is attached to write and direct the Uncharted movie, has responded to fans’ comments about changes to the game’s story as it makes its way onto the big screen.

Russell has said in previous interviews that he planned to have lead character Nathan Drake be part of a shadowy family that policed the trade of antiquities. Leading man Mark Wahlberg also revealed that Drake’s father and uncle – characters that have never appeared in the games – would feature in the movie, and that he and Russell were hoping to secure Robert de Niro and Joe Pesci for the parts.

He said that that concept had been inspired by his experience playing the games, as well as the material he’d read about them and his meetings with Amy Hennig, the creative director at Naughty Dog. He acknowledged that fans of the game had their concerns about these ideas, and had even gone so far as to make unsolicited overtures about his casting decisions. He said that he knew what he was doing, however, and that the fans would just have to trust him.

Russell stated that he was going to stay true to the core content and spirit of the games, but that ultimately his job was to make a great movie. He said that converting a game into a film was an interesting proposition, because the experience of playing a game was so different from that of watching a movie. He thought that games were all about the gameplay, and didn’t really require the player to engage emotionally with the narrative. He also pointed out that there weren’t a lot of videogame movies that really held up as good films, or solid franchises.

Russell isn’t wrong when he says that most videogame movies aren’t all that great; what is arguably the most successful franchise, the Resident Evil series, is fun, but it’s not what you’d call a triumph of cinema. What’s more, movies like Super Mario Bros., Alone in the Dark and Bloodrayne are positively dire. That said, to imply that the blame for these less-than-amazing movies lies solely with the games is unfair. No one’s going to say that videogame stories are the best in the world, not unless they’re wearing some incredibly thick rose-tinted glasses, but by the same token, they’re not the worst either. They also don’t need quite as much tweaking as screenwriters and directors seem to think they do.

Of course, Russell hasn’t even finished the script for the movie yet, so any comments about its quality or content is just supposition. What seems to be worrying most fans of Uncharted most though, is that it sounds less like he’s making a movie based on the game and more like a movie inspired by it. While the film will almost certainly be of a very high quality – as almost all of Russell’s films are – it does raise the question of what role the source material really plays, other than lending the film a little brand recognition.