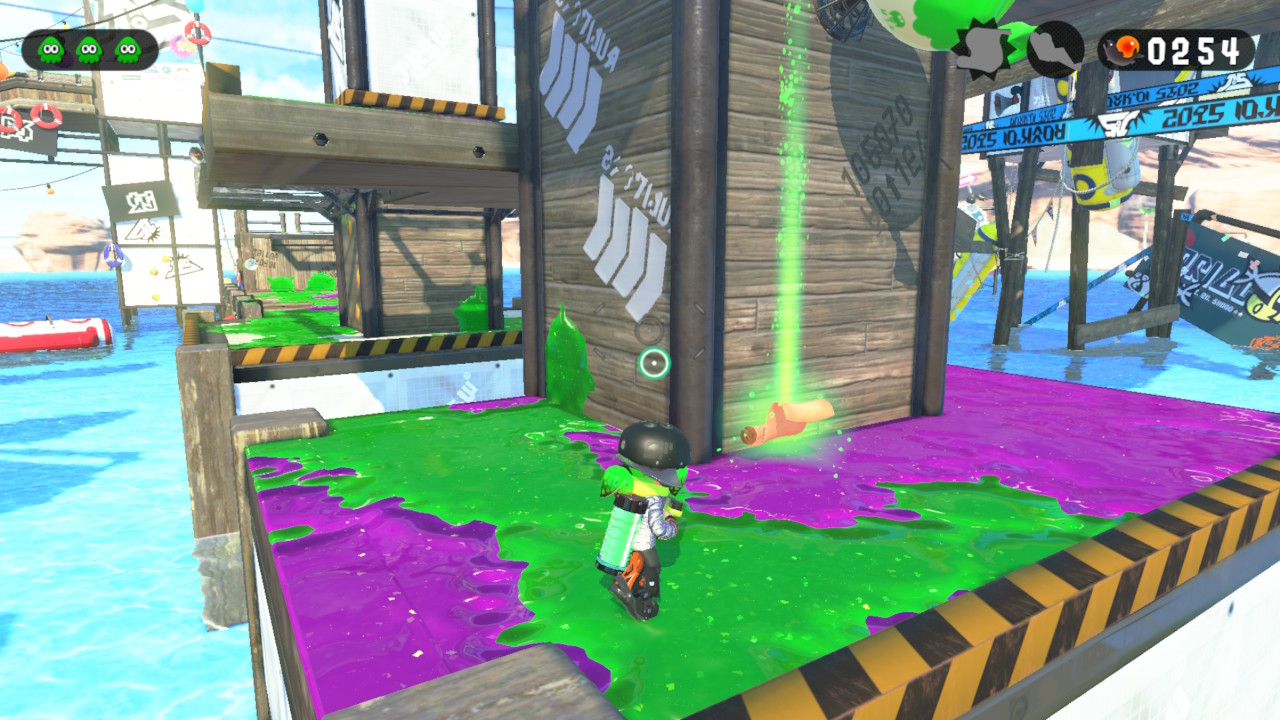 Learn the secret history of Inkopolis with all the Sunken Scroll locations in Splatoon 2.

Sunken Scrolls are little pages that reveal tiny tidbits of story. Sometimes it’s just a funny joke about the empty lives of the Inklings, sometimes it’s a hint about the story in the campaign, but it’s always filled with bright splashes of Splatoon 2 artwork. They’re not exactly useful or required, but they’re really fun to find.

Go back and re-explore the levels of Splatoon 2 and find all the scrolls you might’ve missed with the complete list of collectible scrolls down below.

Sunken Scrolls are fun collectibles that fill your special memories journal with new pages. Each sunken scroll unlocks a single page — not counting the souvenir stickers, but we’ll also cover locations for all of those too.

When you get a sunken scroll, you’ll get a look into the history and past of Inkopolis, including some not-so-subtle story hints. These are a fun find for completionists, and they can be pretty tricky to locate every once in awhile. Check out all the locations below.

Souvenir Sticker #1: Tentakeel Outpost Overworld – From the Inkoplis entrance, find it directly left before reaching the center. Shoot the “?” balloon and follow it to the back-right corner. Pre-ink the area up to make climbing the walls and jumping the tiny gap easier! If you’re too slow, the balloon will just reset, so give it another try when you’re ready.

Sunken Scroll #1: Level 1: Return of the Octarians ~ Rescue the Zapfish ~ Past the checkpoint, you’ll need to break an ink balloon and turn into a squid to drop through the metal grating. Down below, turn around and drop onto the lower level with a metal catwalk and a crate. Create an ink path up the metal wall to get up on the catwalk and smash the crate to get your first scroll.

Sunken Scroll #2: Level 2: Welcome to Octopia ~ The Summer Wind Rises ~ Past the second checkpoint, drop into the purple inked level beneath the second tall pillar. At the top, you’ll reach a metal catwalk with an Octarian guarding it. Drop down behind to land right next to this scroll.

Sunken Scroll #3: Level 3: Sunset Octocopter ~ Dash and Jump ~ Climb the wall with two ink pistols, then immediately turn right to find an optional pathway before the launch pad. There’s a wall you can ink to reach the top of the pillar and grab a Sunken Scroll.

Souvenir Sticker #2: Suction-Cup Lookout Overworld – Find the starter “?” balloon just below the Level 5 entrance. It leads to the (otherwise!) optional tall tower to the left of the Level 9 entrance.

Sunken Scroll #4: Level 4: Enter the Octohurler ~ Let It Roll! ~ When you face the platform with four Octohurlers, ride the rotating ink scrubbers to find a secret platform with a scroll and two extra crates beneath the launch pad.

Sunken Scroll #5: Level 5: The Octopark ~ Stay on Your Grind ~ Found on the last tall pillar with the large crate when riding the grind rail to the exit launch pad, after the final checkpoint. Don’t use the launch pad until you smash that crate and grab another backstory-filling sunken scroll.

Sunken Scroll #6: Level 6: Octozeppelin Invasion ~ Time to Set Sail ~ Under the platform where you first encounter the huge wall of Octo-rockets, aim and blast the ink grind rail on the small lower platforms, summoning a long trail you can hop down and ride to the area above the rocket dispensers.

Sunken Scroll #7: Level 7: Back-Alley Cleanup ~ Suck It Up ~ At the third checkpoint with the giant Squee-G machine, drop down onto the un-inkable surface in the back-right corner of the floating island. There’s a hidden path back here that leads to this level’s sunken scroll.

Sunken Scroll #8: Level 8: Spinning Campground ~ Ink Me Out, Ink Me In ~ In the area with the rows of inkfurlers that unfold like a carpet, found just after taking the launchpad, the fourth inkfurler stretches much further than the others. Follow it left to a tiny island with sunken scroll crate.

Sunken Scroll #9: Level 9: Octoling Strike ~ Riot in the Reef! ~ On the enemy spawn’s side of the map, find the path to the left of the coffee shop (there’s a sneaky path behind it) that leads to a raised platform with an ink wall protecting it. Destroy the ink wall and ink the surface to make a large crate appear. The sunken scroll is in there.

Souvenir Sticker #2: Beaker’s Depot Overworld – This balloon is very easy to spot – it’s just to the right of the floating charger hook platforms that lead to the boss kettle, or below (and slightly left) of Level 12.

Sunken Scroll #10: Level 10: Octoseeker Shakedown ~ A Midnight Stroll ~ Reach the area with the Octoseeker that circles a tall pillar with a locked key vault. Look beneath the ink sponges – far down below, there’s another set of sponges! Shoot them and drop down to this secret path

Sunken Scroll #11: Level 11: The Floating Garden ~ Chasing Heartache ~ In the large maze-like area with lots of long, narrow pathways where you need to hunt down the Tentakook, look down to spot a square platform with another Tentakook. Drop down and defeat the Tentakook to make the sunken scroll appear.

Sunken Scroll #12: Level 12: Octo-Resort Spring ~ Everybody Bounce ~ At the second ink-jet bot that chases your Inkling hero, climb the wall to the left of the ink sprayer’s track, then hop onto the top and ride to the tallest platform near the launch pad. Crack open the tiny crate to get your sunken scroll!

Sunken Scroll #13: Level 13: Dancing Floors ~ Ink Switcheroo ~ In the area with two ink jet robots where you need to collect a key, lure one of the bots under the flying ink hookshot to land on top. That way, you’ll be able to reach the back-right pillar with the sunken scroll crate.

Sunken Scroll #14: Level 14: Parking Garage ~ Drive to the Finish ~ Found directly beneath the checkpoint you activate in the OctoSniper alley.

Sunken Scroll #15: Level 15: Octoling Assault ~ Pump Track It Up! ~ Found in the locked vault near the enemy spawn point. Get the key from a small crate near the first inkfurler you’ll find slightly left and close to your spawn, next to a Mini Zapfish.

Souvenir Sticker #4: Slimeskin Garrison Overworld – Found under the platform with the Level 18 entrance.

Sunken Scroll #16: Level 16: Secret Bowling Alley ~ Rollin’ through the Ink ~ When you encounter the GIANT Octorollers, hop into the turret and blast the bubble weak point to destroy the slow bowling balls. Destroy them, then get to the tower near the huge Octoroller spawner.

Sunken Scroll #17: Level 17: Octocommander Fortress ~ Child of the Battlefield ~ Just past the final checkpoint, drop down onto the spinning platform and immediately turn around to find a little alcove.

Sunken Scroll #18: Level 18: Towering Heights ~ Climb and Slide ~ In the area with the Octosnipers, defeat all three then find the ramp to the right of the front-left Octosniper. Drop down onto the under-path and break the little crate to reveal a scroll collectible for your scrapbook.

Sunken Scroll #19: Level 19: The Experimentorium ~ Floaty Fun ~ On the center launch pad path from the three locked vaults at the start of the stage, reach the section where you need to use the Blaster to hit each of the floating ink hook shots. Part of the way across the hooks, shoot the gravity panel on the left to lower the platform with the scroll so it appears right next to the key.

Sunken Scroll #20: Level 20: Propellerland ~ Rubber Parasoles ~ After unlocking the propeller with one key, ride up and step onto the vault platform. Turn around and shoot the propeller so the platform rises up and reveals a red button. Blast it to make the sunken scroll appear behind the second locked vault.

Sunken Scroll #21: Level 21: Octolings Ahoy! ~ Moray Twilight ~ From the center, follow the path toward the enemy side of the map. There’s an Octosniper on a platform with two small metal grate platforms – to the left, there’s a grate wall you can jump through with squid-form. Land on this platform that doesn’t normally exist in this multiplayer map to find the scroll in a big crate.

Souvenir Sticker #5: Cephalon HQ Overworld – The blue “?” balloon is located under the Level 25 entrance door and slowly circles the tall tentacle-like rock. Using the Charge is absolutely required to pop all the balloons here. To reach the actual sticker, you’ll need to use the charge to ink the invisible platform and jump to a nearby (also invisible!) rotating platform from a pink UFO.

Sunken Scroll #22: Level 22: Underground Expressway ~ Octobrush with Danger ~ At the very end of the level, when you’ve defeated the last OctoCommander in the invisible floor area, drop down to the invisible platform directly beneath the Zapfish. Find the invislbe platform to the right. Spray ink around the right to find it.

Sunken Scroll #23: Level 23: The Octogalaxy ~ One with the Cosmos ~ When you reach a grind rail that takes you through an obstacle course of ink scrubbers attached to white pillars, look for a second grind rail on your right as you slide. Hop to this rail to land on a small optional island with the scroll inside a crate.

Sunken Scroll #24: Level 24: Transfer Junction ~ Intersection of the Soul ~ After getting to the second checkpoint, reach the area with two platforms that rise up and down with Octarian gunners on both. Drop down from the area between those two lifts to find a sneaky alcove.

Sunken Scroll #25: Level 25: Platform Madhouse ~ Please Mind the Gap ~ Right before reaching the Zapfish, you’ll need to blast the Ink Switch until your lift turns on its side. Look on the Zapfish platform and shoot the tiny red button in the corner. It will cause a launch pad to appear. Ride it and then get onto the second launch pad on the back of the huge stamper to land on a stack of crate. Smash them all to get one tough scroll.

Sunken Scroll #26: Level 26: Paradise Lanes ~ Get the Ball Rolling ~ On the dual-Octoroller track where the rollers are stacked three-high, reach the large crate in the back-right corner, on the right lane!

Sunken Scroll #27: Level 27: Octoling Workout ~ Forge Those Mussels ~ Find the Zapfish in the far back-left corner of the map, near the enemy spawn. Opposite it, there’s a small crate on a short wall with a metal grate. Get on that grate (there’s an inkfurler on the other side of the wall) and break the crate to get your scroll.