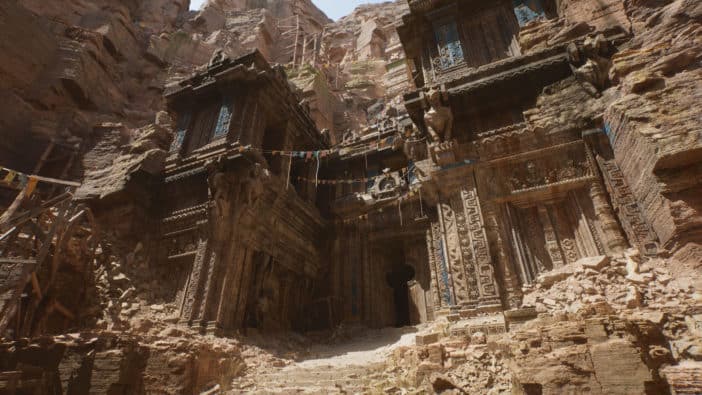 We’ve been given our first look at the power of Unreal Engine 5 running on next-gen hardware. The PlayStation 5 demo was presented during the second day of Geoff Keighley’s Summer Game Fest, with Epic Games’ Brian Karis and Jerome Platteaux presenting the demo. Additional information was posted on the Unreal Engine website, but you can watch the entire Unreal Engine 5 demo below. The engine will be out in 2021 and supports current-gen and next-gen platforms, plus iOS, Android, Mac, and PC.

There’s a lot of technical talk in the video above, but the important part sells itself: The demo looks stunning. This is arguably the first time next-gen has really been shown in all its glory, as cleaner animations, realistic and dynamic environments, and some really spectacular lighting are all on display during the real-time PlayStation 5 demo. For example, Unreal Engine 5 features Nanite, which allows video game creators to use movie-quality assets in-game, among other things. Meanwhile, the lighting showcased in the demo is thanks to the new Lumen system, a “fully dynamic global illumination solution” that reacts to changes in the setting. In a nutshell, this engine will give developers the tools to make better games.

Speaking to IGN, Epic Games confirmed that there are no plans to turn today’s demo into a full game, though it would have been playable at the Game Developers Conference had the event not been canceled.

Epic also revealed that Fortnite will launch with the Xbox Series X and PlayStation 5. This version of the game will take advantage of the new hardware but will release with all the same content. Cross-play and cross-progression are planned for the next-gen Fortnite, too, with an Unreal Engine 5 updated version of the game coming in 2021.

For the full reveal and the post-reveal interview, you can watch today’s entire stream below.

Yesterday’s Summer Game Fest stream brought us the reveal of a Tony Hawk’s Pro Skater 1 and 2 remake, so be sure to check out our coverage of the reveal.