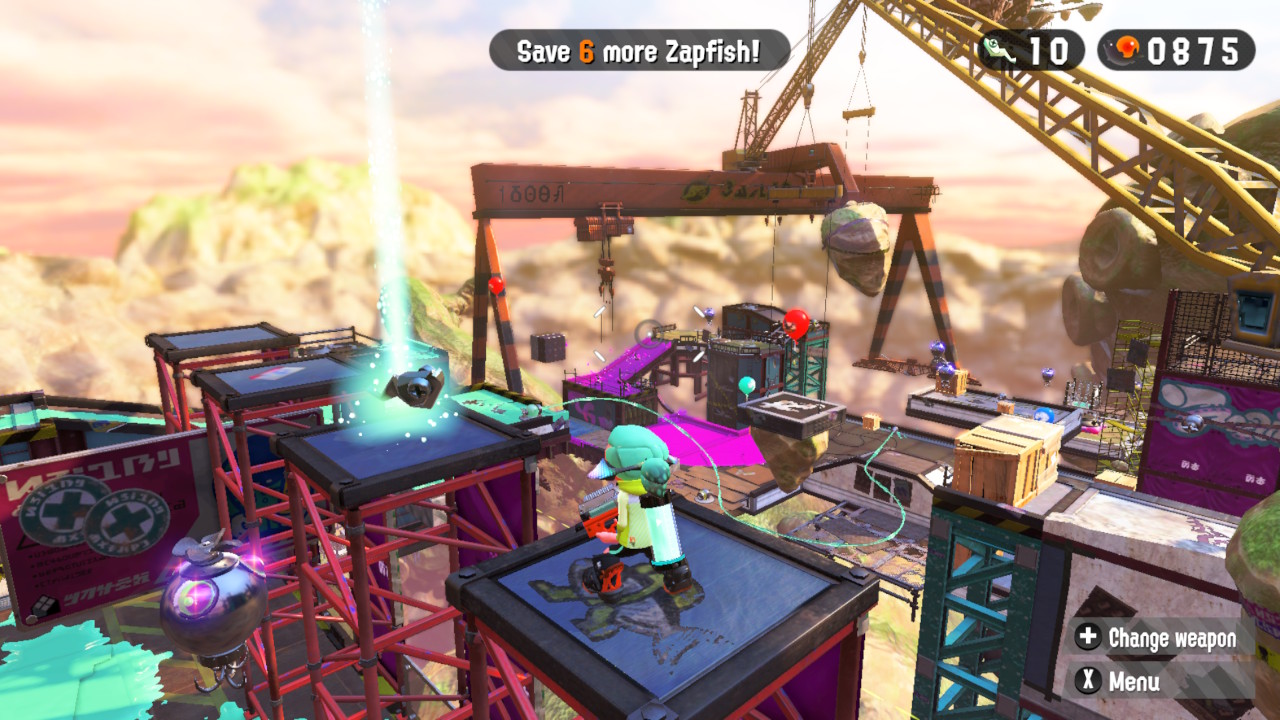 Sardinium is one of the most valuable collectibles in Splatoon 2 — the more Sardinium you find, the more you’ll be able to unlock upgrades for all your hero weapons in the story mode.

After defeating the first boss, Sheldon from Ammon Knights will unlock his upgrade terminal in the story overworld. Each upgrade for your hero weapons, which can all be upgraded separately, require a certain amount of Sardinium and eggs. If you want to unlock all those handy upgrades, you’ll need to find Sardinium.

Sardinium can be tricky to find, and these little fish statues are all over the place. They’re in the overworld, and you’ll get a free one after every boss battle.

Sardinium is a rare resource you’ll need to collect if you want to upgrade hero weapons. At the start of the story campaign, after defeating the first boss, you’ll unlock the upgrade machine near Marie’s house.

Each level of upgrade costs fish eggs and Sardinium, the little fishy statue-looking collectibles found in every level. You’ll get one in each level, and you can find some in the areas before entering levels too. As a nice reward, Sardinium is given to you after every boss battle, so don’t miss those!

Sardinium #1: Level 1: Return of the Octarians ~ Rescue the Zapfish ~ Above the launch pad that’s on the side of the wall. The platform to this launch pad rises up after blasting the Octarian with the shield turret.

Sardinium #2: Level 2: Welcome to Octopia ~ The Summer Wind Rises ~ Found after the third checkpoint, past the first Squee-G enemy. Up top, look for a launch pad on the side of the wooden wall. Get to the roof above the launch pad and smash the three crates for a fancy find.

Sardinium #3: Level 3: Sunset Octocopter ~ Dash and Jump ~ After the second checkpoint, you’ll enter an area with four ink pistons. In the left corner, there’s a raised platform with a small crate containing a collectible. To get it, go to the third checkpoint and use the small ledge (before the ink piston jump) to reach the collectible platform.

Sardinium #4: Boss 1: Industrial Toast ~ Into the Octo Oven ~ Rewarded for defeating the boss.

Sardinium #5: Suction-Cup Lookout Overworld – Found in the crate-covered walkway at the base of the tower with the Level 6 kettle entrance.

Sardinium #6: Level 4: Enter the Octohurler ~ Let It Roll! ~ On a platform just behind the second launch pad. Don’t accidentally activate that launch pad, or you’ll have to restart the level to collect it!

Sardinium #7: Level 5: The Octopark ~ Stay on Your Grind ~ Past the sixth checkpoint, you’ll reach an area with two grind rails that become three grind rails. Ride the left rail, shoot through the crate and then jump to the left-most rail when a third appears to reach a high platform with this sardinium item.

Sardinium #8: Level 6: Octozeppelin Invasion ~ Time to Set Sail ~ After an early checkpoint, you’ll reach the launch pad partially blocked by the second octozeppelin dispenser. The sardinium upgrade point is very close to the dispenser, past the launch pad. Blast the zeppelins in the tentacle weakpoint with the Ink Charger to get close enough.

Sardinium #9: Level 7: Back-Alley Cleanup ~ Suck It Up ~ Visible at the fourth checkpoint, but you won’t be able to reach it until you find the fifth checkpoint and activate the grind rail. Ride the rail down and jump onto the slightly raised glass platform with the single crate. Smash it to get your hard-earned sardinium.

Sardinium #10: Level 8: Spinning Campground ~ Ink Me Out, Ink Me In ~ At the second checkpoint, climb up the vertical inkfurler and look in the back corner for a lower metal grate platform before climbing too much further. There’s a couple of crates down below you can blast, and one has a sardinium treat inside.

Sardinium #11: Level 9: Octoling Strike ~ Riot in the Reef! ~ In a large crate on the opposite end of the map from the starting point, right next to the Octoling spawn.

Sardinium #13: Beaker’s Depot Overworld – Ride the windmill platform to the right of the entrance to Beaker’s Depot, then use the Charger on the floating hook to reach the platform that leads to Level 13. Near the Level 13 door, ink the metal wall and hop across the pillars to find a tiny crate with this tricky Sardinium inside.

Sardinium #14: Level 10: Octoseeker Shakedown ~ A Midnight Stroll ~ On the path after the final checkpoint, smash all the crates behind the next launch pad. It’s right behind the launch pad that leads to the Zapfish.

Sardinium #15: Level 11: The Floating Garden ~ Chasing Heartache ~ During the final Tentakook encounter, defeat all the Tentakooks (try using the special weapon at the top of the ramp!) to get two keys. Use the extra key to open the vault on the left side near the entrance to the Tentakook arena.

Sardinium #16: Level 12: Octo-Resort Spring ~ Everybody Bounce ~ Past the bouncy conveyor belt, you’ll find a robot spraying ink left and right. To the right, there’s a tall platform with a crate containing the sardinium. Ink up the wall on the sprayer’s path to reach it.

Sardinium #17: Level 13: Dancing Floors ~ Ink Switcheroo ~ After the second checkpoint, climb the stepping blocks after activating the ink switch that causes the platforms to pop out and slowly reel back in. Quickly rush up to the platform to the left of the launch pad at the top! The wall facing the switch platforms has an inkable wall.

Sardinium #18: Level 14: Parking Garage ~ Drive to the Finish ~ In the final Octoling arena where you’ll collect the vault key after defeating these wily ink-jerks, look in the back corner with a car blocking the edge of the platform. There’s a sardinium collectible here.

Sardinium #19: Level 15: Octoling Assault ~ Pump Track It Up! ~ Reach the enemy spawn area and check out the path to the right. It leads to a taped-up crate with your sardinium inside.

Sardinium #20: Boss 3: Lips for Days ~ The Octostomp Returns ~ This is your reward for defeating the new Octostomp boss.

Sardinium #21: Slimeskin Garrison Overworld – Found inside a taped crate under the Level 16 entrance platform. From the center, go left and activate the inkfurlers to reach the underbelly beneath the structure with Level 16 at the top.

Sardinium #22: Level 16: Secret Bowling Alley ~ Rollin’ through the Ink ~ Get to the second checkpoint and enter the Octosniper alley. Behind the Octosniper is the launch pad, but before riding it out of there, look on the left side at the second lane of Octorollers. There’s a metal grate you can squid through for one more Sardinium!

Sardinium #23: Level 17: Octocommander Fortress ~ Child of the Battlefield ~ At the second checkpoint, ride the spinning platform and ink the wall to the left of the ink grind rail.

Sardinium #24: Level 18: Towering Heights ~ Climb and Slide ~ At the final checkpoint, you’ll have to ride a platform while fighting swarms of Octoslobs that spawn in. Defeat them as fast as you can and fill the ink sponge in the center to gain the height you need to grab the sardinium floating too high to reach normally. Make sure you get it before the Octosnipers appear!

Sardinium #25: Level 19: The Experimentorium ~ Floaty Fun ~ Take the left launch pad path from the start of the level. There’s a strange panel you’ll need to shoot to activate the adjust the geometry of the level – after doing that, shoot the panel on the left side of the square to lower it. Now you can squid-form jump from the left edge to the inked-up center square to reach the Sardinium in a little crate.

Sardinium #26: Level 20: Propellerland ~ Rubber Parasoles ~ Get both keys and unlock both vaults to reach the second propeller platform that moves right when you ink it. Activate the propeller so the platform reaches the end of its track, then shoot the valve to create an ink stream to reach the Sardinium past three rings.

Sardinium #29: Cephalon HQ Overworld – Find it under the tall platform accessible from the yellow UFO. Ride it up and then ink the area behind it. There’s an invisible platform and an alcove containing a few crates – one of them has sardinium!

Sardinium #30: Level 22: Underground Expressway ~ Octobrush with Danger ~ Past the OctoCommander, you’ll reach a large cube with a trench around it. The vault on top of this cube has a Sardinium piece locked inside, but you’ll need to defeat the OctoKook down below to get the key. This get is tricky with just the HeroBrush! You’ll need to deploy Auto-Bombs to lure him our get a very good ink bomb throw to take this annoying enemy out.

Sardinium #31: Level 23: The Octogalaxy ~ One with the Cosmos ~ After using the Ink Cannon to pop the ink balloons and riding the rails / walls, you’ll reach a long series of grind rails. Below, there’s a safety net of three rails you can use to make the area easier, but if you stay on the top level and rail-switch as the short rail lines end, jump through the ring up the ramp to get one tough Sardinium shard.

Sardinium #32: Level 24: Transfer Junction ~ Intersection of the Soul ~ Past the first checkpoint, there’s an inkable wall you’ll need to right to the right. Climb to the top and you’ll find this sneaky little Sardinium on the opposite side of the wall. To actually get it, make sure you ink the wall!

Sardinium #33: Level 25: Platform Madhouse ~ Please Mind the Gap ~ When you reach the area with the shifting platforms, fight past the two OctoCommanders (minigunners!) and climb the wall. On the other side, look down and drop down to the lower hidden floor. This is right before the Ink Switch.

Sardinium #34: Level 26: Paradise Lanes ~ Get the Ball Rolling ~ At the first checkpoint, drop down onto the single enemy ink-covered narrow ramp path below. Defeat the Octarian enemy, then turn around to find a single crate with the level’s Sardinium.

Sardinium #35: Level 27: Octoling Workout ~ Forge Those Mussels ~ On the hero spawn side of the map, find the coffee shop roof (near the center, with the clock signage at the top) – ink the roof to make a secret crate appear. Splat it to reveal the scroll.